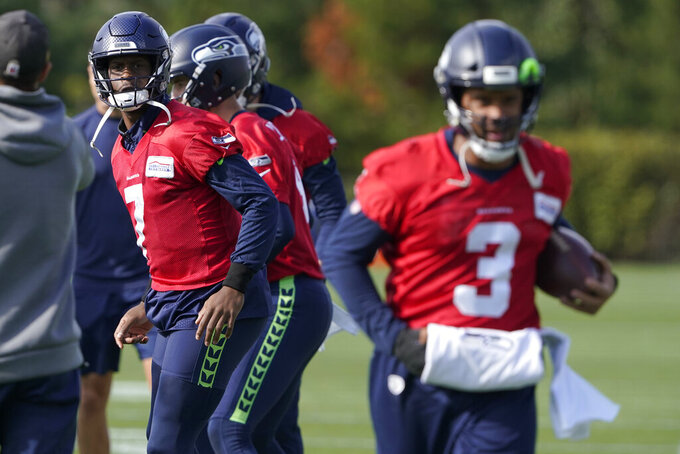 Seattle Seahawks quarterback Russell Wilson (3), keeps his injured hand in a pad as he runs through a warmup drill with backup quarterback Geno Smith (7) behind him during NFL football practice, Wednesday, Oct. 13, 2021, in Renton, Wash. Wilson had surgery on his hand last Friday, and Smith is expected to be the starting quarterback Sunday when the Seahawks play the Pittsburgh Steelers on the road. (AP Photo/Ted S. Warren)

About a third of the starting quarterbacks have already missed time because of injuries, and Richard Sherman’s return to the NFL was hastened by Tampa Bay’s need at cornerback.

And now Sherman is hurt.

There are big names aplenty among the early-season strains and sprains, or worse.

Quarterback Daniel Jones sustained a concussion and running back Saquon Barkley sprained an ankle before the New York Giants could get to halftime in a 44-20 loss to Dallas last week.

While the news has been encouraging for both this week, Barkley is coming back from an ALC tear that sidelined him after Week 2 last year. The Giants were without their two most important offensive players for most of a fourth loss in five games to start this season.

“I'll be honest, it's frustrating,” said Barkley, who was ruled out for Sunday against the Los Angeles Rams. “You have those days to reflect and feel bad for yourself and have that ‘Why me?’ mentality, but you can't keep that mindset. Having that mindset, you're not going to get anywhere with it.”

Barkley isn't the only big-name back on the sidelines. Carolina's Christian McCaffrey hasn't returned since injuring his hamstring in Week 2 against Houston. In Cleveland, Nick Chubb is out with a calf injury, with replacement Kareem Hunt battling wrist and knee issues.

Baltimore lost two running backs to season-ending knee injuries before the opener, including starter J.K. Dobbins. The other back, Gus Edwards, and two-time All-Pro cornerback Marcus Peters each tore an ACL in the same practice the week of the opener.

Still, the Ravens have won four consecutive games since letting a late lead slip away in their Monday night opener at Las Vegas, and are in a familiar spot atop the AFC North.

Jones, the latest among the quarterbacks to go down along with Seattle's Russell Wilson, has been cleared to play Sunday against the Los Angeles Rams. The sequence was the same for Denver QB Teddy Bridgewater, who left a loss to Baltimore two weeks ago with a concussion but returned in a loss to Pittsburgh and Ben Roethlisberger, who has played through a hip issue.

Wilson will miss a game for the first time in his 10-year career while being out multiple weeks with a broken middle finger on his right hand. Tyrod Taylor of Houston has been out since Week 2 because of a hamstring issue.

Taylor was supposed to replace Deshaun Watson, who wants a trade and faces allegations of sexual assault or harassment. The Texans were forced to go with rookie Davis Mills and haven't won since the opener.

Ryan Fitzpatrick didn't make it to halftime of Washington's opener before the 38-year-old injured a hip. Tua Tagovaiola is expected to return this week against winless Jacksonville in London after missing four games — all Miami losses — with fractured ribs.

Veteran Andy Dalton started in Chicago with fans clamoring for rookie Justin Fields to take over. They got their wish after Dalton injured a knee, and now Fields has become the starter. Fields has been dealing with a rib issue, too.

The scenario is almost identical in San Francisco, where Jimmy Garoppolo's calf injury led to the rookie Trey Lance's first career start. Garoppolo was steady if unspectacular, Lance was spotty, and now both are hoping to be ready after the open week for the 49ers.

Carson Wentz hasn't missed any games for Indianapolis but is dealing with two troublesome ankles. Cincinnati's Joe Burrow was taken out last week with a throat contusion but is expected to play against winless Detroit.

Sherman, who had legal issues involving a domestic incident in the offseason, signed with Tampa Bay after injuries to starting cornerbacks Sean Murphy-Bunting and Jamel Dean. Sherman leads the NFL in interceptions over the last 10 years but now is dealing with a hamstring issue, indicating on Twitter that his layoff might have played a role.

Soft-tissue injuries are usually a concern early because of rules limitations on work in the offseason and training camp. The focus changes, however, once the season starts.

“In season, my personal experience is you’d probably have to guard more against doing too much than not enough,” said Cowboys coach Mike McCarthy, whose team has been missing safety Donovan Wilson (groin) and receiver Michael Gallup (calf) for multiple games.

“I feel really good about the conditioning level of our football team. You want to get to that level and you want to maintain it. And you try to be as safe and smart as you possibly can,” McCarthy said.

There are plenty of injuries to big-name players that don't have anything to do with layoffs.

Pittsburgh receiver Juju Smith-Schuster is out for the year with a shoulder injury that is requiring surgery. Houston left tackle Laremy Tunsil will miss about a month after thumb surgery.

Jaguars linebacker Myles Jack didn't make the trip to London this week because of a back injury. Xavien Howard, Miami's 2020 All-Pro cornerback, also won't play because of a shoulder issue.

With, undoubtedly, more injuries to come.