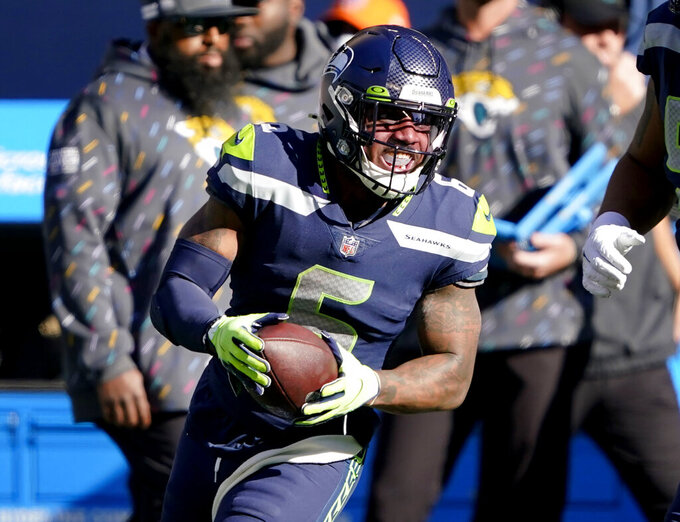 FILE - Seattle Seahawks' Quandre Diggs reacts after intercepting against the Jacksonville Jaguars during the first half of an NFL football game, Oct. 31, 2021, in Seattle. A person with knowledge of the deal says the Seahawks have agreed to terms on a contract with free agent safety Diggs. (AP Photo/Ted S. Warren, File)

RENTON, Wash. (AP) — Quandre Diggs had been expected to be too expensive for the Seattle Seahawks once the Pro Bowl free safety hit free agency.

And there was plenty of interest, with Diggs estimating roughly 15 teams reached out to him.

“The whole thing for me was always about being comfortable and not having to move my family around the country, just being somewhere where coaches trust me, the people in the building know me,” Diggs said Wednesday. “I just think every time we came back to it, Seattle was the best place for us to be.”

Diggs returning to Seattle was a bit of a coup for a team that’s undergone some major changes already this offseason. Diggs signed a three-year deal worth up to $39 million to remain with the Seahawks.

Diggs is coming off his best season with a career-high 94 tackles and tied his career high with five interceptions. He has 13 interceptions in 38 regular-season games since being acquired from Detroit midway through the 2019 season.

Diggs suffered a dislocated ankle and broken fibula in the closing minutes of the season finale in Arizona that required surgery. He’s expected to be cleared for activity well before the start of training camp this summer.

Diggs said the Seahawks' support while he recovered helped him decide to return.

"People that understand the rehab process that I have to go through, for them to continue to believe in me and trust in me and stand by me through my injury, I think that’s been pretty dope,” Diggs said.

When he does return, he will be part of a significantly different defense, not to mention the team as a whole. Along with trading Russell Wilson to Denver, the Seahawks released linebacker Bobby Wagner and defensive linemen Carlos Dunlap and Kerry Hyder Jr., saw cornerback D.J. Reed sign with the Jets and fired defensive coordinator Ken Norton Jr.

Seattle is expected to shift to more of a 3-4 system under new defensive coordinator Clint Hurtt and new associate head coach for the defense Sean Desai. The new structure may not mean significant change for Diggs and his responsibility for covering the middle of the field. But he understands the desire to expand what Seattle can show and do with its fronts.

“I think it’d be cool,” Diggs said. “I mean, I think it’s always good to continue to expand your knowledge of the game and learn new things."