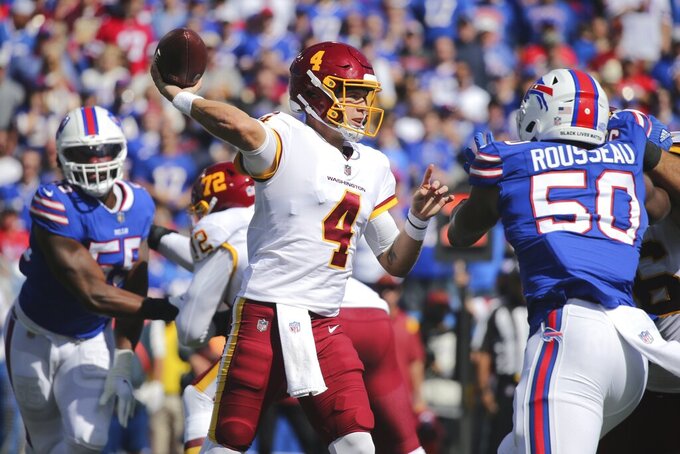 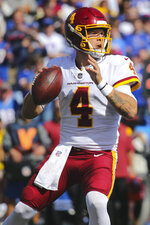 Among the knocks against Alex Smith in his final NFL season with Washington were his inability to stretch the field and a propensity to play it safe.

Enter Taylor Heinicke, the gunslinger who played with reckless abandon when he started in place of Smith in the playoffs last season, and has resumed that since Ryan Fitzpatrick went down. Heinicke showed off his best and worst in Washington's blowout loss at Buffalo that was far more on the defense than him.

That doesn't mean the 28-year-old quarterback doesn't have some room to improve now that the starting job is his for the foreseeable future.

Heinicke threw for two touchdowns, ran for another and tossed two costly interceptions against the Bills. He's far from Smith in almost every way, but borrowing some of the retired QB's better tendencies could be the key to Heinicke growing with more NFL experience.

"I’d like to see him do things in more of a game manager way," coach Ron Rivera said Monday. “Sometimes that is really just taking what’s given to you. ... We’ll live with the good decisions, the right decisions.”

With Washington at 1-2 and a visit to the Atlanta Falcons looming, Rivera would like to see Heinicke make more sure-thing passes and let teammates pick up first downs, rather than wait for a deep ball down the middle or make an ill-advised throw across his body.

There's of course the delicate balance of Heinicke being Heinicke, like diving for the end zone pylon. Making those kinds of all-out plays earned Heinicke respect among teammates in a near-upset of Tom Brady and the eventual Super Bowl champion Tampa Bay Buccaneers in the playoffs.

But this is not win or go home, and Heinicke must adapt to the situation of being the long-term guy for the first time since college.

It doesn't feel like a whole lot right now, but the passing game has potential. Heinicke has developed chemistry with top receiver Terry McLaurin and tight end Logan Thomas, and that can only grow with time.

Basically everything on defense. The talented defensive line full of first-round picks in Jonathan Allen, Daron Payne, Chase Young and Montez Sweat is not getting enough pressure, linebackers are struggling, and the secondary is getting picked apart.

The latest result of that was Josh Allen and the Bills putting up 481 yards of offense. No single player is to blame.

“We have to play the schemes the way they’re designed,” Rivera said. “They’re set up a certain way and there’s an accountability to it, and you have to do your job.”

Running back Antonio Gibson flashed with a 73-yard touchdown catch against Buffalo. It was the kind of play that typified Rivera's hope Heinicke can let other offensive weapons make some plays.

Linebacker Jon Bostic has been a staple of Washington's defense but has been beaten on a few plays of late and is one of many reasons the unit is not playing to expectations.

Receiver Curtis Samuel is eligible to come off injured reserve this week. Rivera is taking a wait-and-see approach after Samuel was put on IR to give him more time for a nagging groin injury to heal. Defensive tackle Matt Ioannidis is expected to return to practice after missing the Buffalo game with a knee injury.

3 — first-drive touchdowns Washington’s defense has allowed through three games. It is a point of emphasis, but "it is also everything’s got to be better," Rivera said.

Find a way to fix the defense because Matt Ryan is still more than capable of exploiting weaknesses.