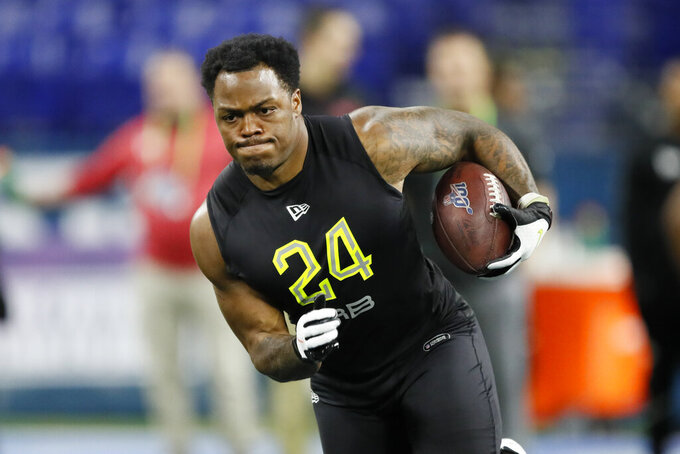 If Robinson starts for Jacksonville against Indianapolis, as expected, he would become the fourth undrafted rookie running back to do so in a season opener since the AFL-NFL merger in 1970 and the first in the last 30 years.

If he runs for 45 yards, he would break the record for the most by an undrafted rookie in Week 1.

Either way, don’t expect much reaction from the former Illinois State standout. He’s the quietest guy in Jacksonville’s locker room and among the least talkative in years.

“I feel good about him,” offensive coordinator Jay Gruden said. “I’m excited to watch him play and I know he’s excited. He won’t show it, though. I haven’t seen him smile but twice the whole time he’s been here. He’s a very focused guy and I think he’ll be ready. I know he’ll be ready.”

Robinson became Jacksonville’s featured back over the last two weeks, getting to the top of the depth chart after the team waived three-year starter Leonard Fournette and then lost backups Ryquell Armstead (COVID-19) and Devine Ozigbo (hamstring).

Truth is, the 5-foot-9, 220-pound Robinson looked as good, if not better, than any of them in training camp.

His emergence was the main reason general manager Dave Caldwell and coach Doug Marrone believed they could seamlessly move on from Fournette, who had been a disappointment on and off the field for most of three seasons.

Robinson’s vision, cutting ability, burst and blocking turned heads from Day 1. His pass protection caught Marrone’s eye, and his professionalism and demeanor really sucked the coach in. His approach was the opposite of Fournette’s playful attitude.

“You watch the way someone goes about their business and James is all football,” Marrone said. “He’s really a man of few words, doesn’t really say much, but really picked things up quickly, really had a good feel. So now you start saying, ’Do I think he’s better than …” You know what I’m saying?”

Marrone was so intrigued that he took a deep dive — an oddity during camp — into Robinson’s college tape. Marrone watched every Illinois State game from 2019, when Robinson ran 364 times for 1,899 yards and 18 touchdowns.

The senior notched eight games with at least 100 yards and topped 200 yards twice in the Football Championship Subdivision playoffs. He had a school-record 297 yards on the ground in a first-round victory at Southeast Missouri and finished the season ranked second in the FCS in rushing yards.

Jaguars college scouts took notice then and then saw him hold his own at the NFL combine. A slower-than-expected time in the 40-yard dash likely prevented him from getting drafted. Jacksonville and San Francisco were the only teams that contacted Robinson after the draft to offer him a free agent deal.

He decided to sign with Jacksonville and simply went to work.

“Obviously, when I didn’t get drafted, it was sad for all of us,” Robinson said. “I think, for me, it was more of just trying to do something to help out my family and show that I wasn’t going to let me not getting drafted bring me down.”

He quickly showed he belong — on the team and in a starting role.

Teammates raved about his talent and his work ethic. They also marveled at his ability to remain socially distant in the huddle, in meeting rooms and in the locker room.

“I think I heard him talk today for the first time,” defensive end Josh Allen said. “He was on the phone and I was like, ‘That’s what his voice sounds like.’ I know he smiles a lot. I try to talk crap to him out there and he just smiles and laughs.

“I can’t wait to see him play because he’s done a lot of good things.”

He could do more against the Colts. Just starting would put him in rare company. Tampa Bay’s Bruce Perkins and Seattle’s Derek Loville were the last to accomplish the feat, doing so in 1990. Before that, it was Doug Kotar in 1974 for the New York Giants.

There have been plenty of undrafted running backs go on to have stellar NFL careers, most notably Priest Holmes in Kansas City and Arian Foster in Houston. More recently, Denver’s Phillip Lindsay made the Pro Bowl as an undrafted rookie in 2018.

But none of those three started Week 1 of Year 1. Robinson could do that and more.

“He’s kind of a quiet guy, but man, he’s a great guy,” quarterback Gardner Minshew said. “He’s gained all the respect of all the older guys because he came him, knew his stuff, took the responsibility that he had and proved that he’s deserved it.

“We keep giving him more, and I think everybody on the team is very excited for him and the opportunity he has.”