Quinn still trying to 'get it right' with time running out 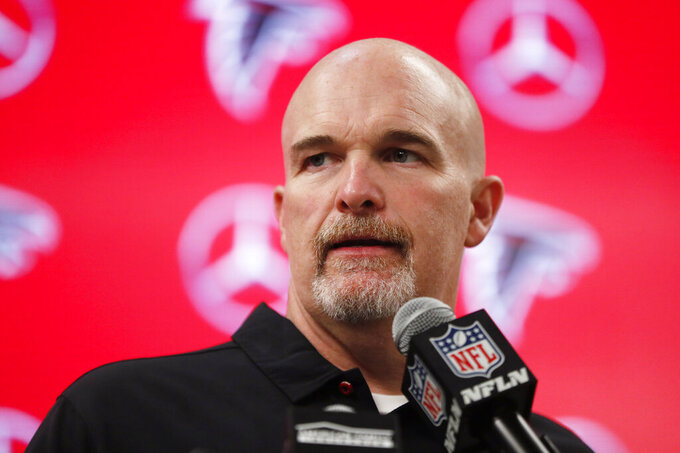 FLOWERY BRANCH, Ga. (AP) — Falcons coach Dan Quinn would like to brush aside any questions about his job status.

No matter how hard he tries doesn't matter. Quinn's future is in doubt as owner Arthur Blank spends the bye week reevaluating the coaching staff and the front office .

"Well, I can honestly say with all the time and all the attention I have, I couldn't think of a bigger waste of my mental health and space," Quinn said Monday. "All I want to do is see if we can get it right. That's what we want to deliver for Arthur. That's what we want to deliver for the fans, for the team and have performances that the city deserves. That's really important. So to spend any time or moments thinking, 'What if I don't?' that would only take away from that."

Before the season began, Atlanta seemed to have enough talent to compete for a playoff spot with Matt Ryan, Julio Jones, Calvin Ridley, Alex Mack, Grady Jarrett, Deion Jones and Desmond Trufant on the roster.

Instead, the Falcons have proven adept in one category — they lead the league in yards passing — but that's more a function of playing catch-up than anything else. The defense ranks last in scoring, sacks and third-down percentage. The offense is 29th in rushing, and the team is tied for worst in turnover margin.

And no numbers are more shocking than 144-50, Atlanta's combined deficit in first halves. The trend continued Sunday against Seattle when the scoreboard read 24-0 at intermission. Losers of six straight, the Falcons have trailed by double digits six times entering the third quarter.

Not much. The team has insisted all along that effort isn't lacking, but the results have been dreadful. Even an emotional postgame talk from Jones, the star receiver, provided no spark after last week's blowout loss to the Los Angeles Rams.

"I happened to be in the locker room and in 20 years I've never heard a player talk that way with that emotional content and that fervor and that feeling about their responsibility and their own accountability," Blank said. "I think he touched a lot of players and the whole staff in doing that. That has to convert to a different record."

The Falcons are off to their worst start since 2003, when quarterback Michael Vick had a broken leg and Blank fired coach Dan Reeves with three games to go. Based on Blank's remarks after the Seattle game, general manager Thomas Dimitroff's job status is in question as much as Quinn's.

Quarterback Matt Schaub, making his first start since 2015 for Baltimore, can still sling it. Filling in for the injured Ryan, he made two bad throws, an interception and a would-be pick that was dropped, but the 38-year old otherwise moved his feet well in the pocket and passed for 460 yards.

Kicker Matt Bryant, the leading scorer in franchise history, has missed three times from 50-plus yards in the past two weeks, and he yanked an extra-point attempt three weeks ago that would've forced overtime at Arizona. The Falcons re-signed Bryant in late August after releasing him last winter and committing to Giorgio Tavecchio, who was in turn cut in preseason. At 44, Bryant could be in his last season, and Quinn said the team tried out two kickers on Monday.

Quinn indicated that Ryan, whose right ankle injury forced him to miss his first game since 2009, could likely play if the Falcons had a game this week, so expect him to return Nov. 10 at New Orleans.

Four — how many takeaways the Falcons have this season, and two of them came in one game on interceptions by Trufant.

It's all up to Blank, who must decide what to do with the coach and front office. The Falcons won the NFC title three years ago. Atlanta blew the biggest lead in Super Bowl history two weeks later.