Raiders begin picking up the pieces with trip to Denver 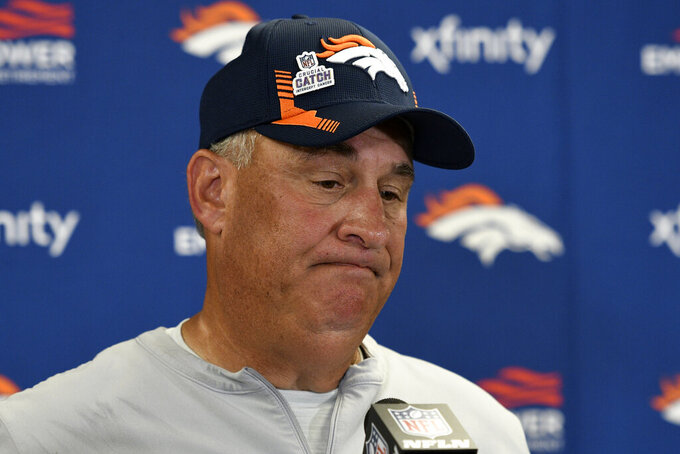 OPENING LINE: Broncos by 3 1/2, according to FanDuel SportsBook.

TURNOVER DIFFERENTIAL: Raiders minus-1; Broncos plus-2.

RAIDERS PLAYER TO WATCH: QB Derek Carr had formed a good chemistry with coach Jon Gruden and now will have to work with a new play caller in Greg Olson after Gruden’s resignation Monday night. Olson was Carr’s play caller as a rookie in 2014 and has been back on staff the last four seasons. After a fast start, Carr has struggled the last two weeks, going 43 for 69 for 402 yards, two TDs, two INTs and a 75.9 rating. Olson might open up the offense and pivot from Gruden's run-first philosophy.

BRONCOS PLAYER TO WATCH: WR Courtland Sutton is coming off a seven-catch, 120-yard performance at Pittsburgh highlighted by his diving 39-yard touchdown in the fourth quarter. That was his first TD in his comeback from a torn ACL in Week 2 last season. With Jerry Jeudy (ankle) out until November and KJ Hamler (ACL) out for the year, Sutton and Tim Patrick figure to get the most targets.

KEY MATCHUP: Raiders TE Darren Waller vs. Broncos rookie CB Patrick Surtain II. This is the type of matchup Denver GM George Paton had in mind when he bypassed a quarterback and selected the Alabama star defensive back with the ninth overall pick in the NFL draft. (Kansas City's Travis Kelce is another). Surtain is learning the NFL ropes at cornerback and dime linebacker and he could get his biggest test yet in facing Waller, whose 28 catches so far are tied for the team lead with Hunter Renfrow and whose 319 yards are second only to Henry Ruggs III's 348.

KEY INJURIES: Raiders DT Jonathan Hankins has a hip injury. DE Carl Nassib (personal/ribs) missed some practice time during the week, as did DE Yannick Ngakoue and Waller, both of whom rested sore knees. Broncos hard-hitting safety Kareem Jackson, whose hit knocked Steelers WR JuJu Smith-Schuster out for the year with a shoulder injury, missed practice this week with a sore back. CB and special teams ace Mike Ford (foot) is sidelined.

SERIES NOTES: The Raiders have won four of the last five meetings. Denver's only win in that span was 16-15 on Dec. 29, 2019, the last game for Mark Davis' team as the Oakland Raiders. They moved to Las Vegas last year and swept the Broncos for the first time since 2010.

STATS AND STUFF: Interim coach Rich Bisaccia begins his tenure with the Raiders after Gruden’s resignation over offensive emails. ... Bisaccia will be the fifth head coach for Carr, tied for the second most for any starting QB with one franchise since the merger. Only Archie Manning had more coaches (seven) in New Orleans. ... The Raiders are one of three teams without a touchdown in the first quarter this season. Las Vegas has failed to score on the opening drive in 11 straight games. ... The Raiders have allowed 10 TDs on 10 red-zone trips by opponents with the exception of a kneel-down by the Chargers in Week 4. ... The Raiders are averaging 11.5 points per game and 4.07 yards per play the last two weeks. ... Renfrow has at least five catches in every game, joining Todd Christensen (1985) as the only Raiders to do that in the first five games of a season. ... LB Denzel Perryman is the only player with double-digit tackles in every game this season. ... The Broncos haven't scored a touchdown on an opening drive under OC Pat Shurmur (21 games) and their league-long drought stretches to 24 games. ... The Broncos are last in the league on third downs, converting just 28.6% of the time. ... QB Teddy Bridgewater has seven TDs and zero interceptions with a 101.2 rating in his last five starts against AFC West opponents. ... RB Melvin Gordon III has 1,011 scrimmage yards and nine TDs in 10 career games against the Raiders. ... Rookie RB Javonte Williams had a season-high 86 scrimmage yards last week. He ranks second among rookies with 247 rushing yards. ... WR Kendall Hinton had his first career touchdown reception last week. ... OLB Von Miller has sacks in four of five games so far. ... S Justin Simmons has an interception in two of his last three home games.

FANTASY TIP: This would be a good week to start Denver's defense. Only the Buffalo Bills (64) have surrendered fewer points than Vic Fangio's unit (76), which is ranked sixth against the run and pass and sixth in red-zone defense.