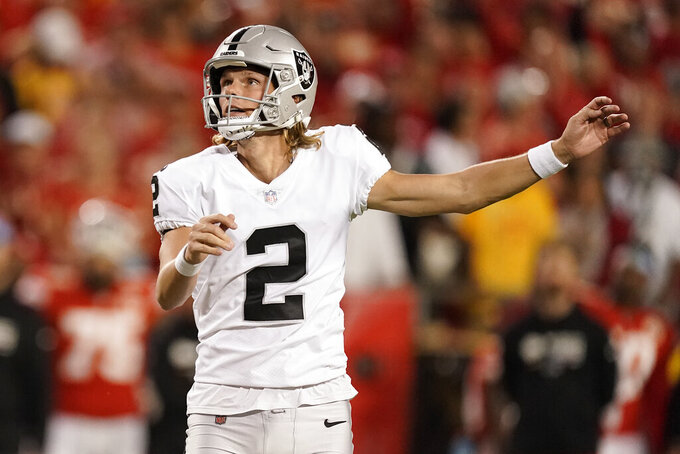 KANSAS CITY, Mo. (AP) — The Las Vegas Raiders were oh-so-close to finally getting the best of the Kansas City Chiefs on Monday night.

Frantically trying to rally his team in the final minute, Derek Carr threw a pretty pass down the sideline to Davante Adams, who already had hauled in touchdown catches of 58 and 48 yards. The standout wide receiver made the grab with less than a minute to go, not only giving the Raiders a first down but putting them in field-goal range position.

But almost immediately the call went to a video review, and it clearly showed Adams bobbled the ball as he stepped on the white chalk. The ball went back to the Las Vegas side of the field, and an ensuing fourth-and-1 throw was incomplete.

It was the fourth consecutive loss to the Raiders' nemesis, and their ninth in their last 10 meetings. They are 1-4 this season.

“It sucks, what our record is. We've earned that,” said Carr, who fell to 1-8 at Arrowhead Stadium. “I just keep reinforcing: We have a good team. I've been on some teams that aren't as good as this one. We're doing the right things.”

They did most of the way Monday night, too.

Josh Jacobs followed a career-best 144 yards rushing and two touchdowns in last week's win over Denver by running for 154 and a score against the Chiefs. Adams made a mockery of almost everybody who covered him. Maxx Crosby kept harassing Patrick Mahomes, and the rest of the Raiders defense held the vastly improved Kansas City ground game in check.

Daniel Carlson was once again perfect on three field-goal tries, running his streak to 38 in a row.

It still wasn't enough to beat Chiefs coach Andy Reid, who improved to 16-3 against the Raiders since arriving in Kansas City, or Mahomes, who is 8-1 in his career against them.

“Congratulate the Chiefs. They made a few more plays than we did,” Raiders coach Josh McDaniels said. “I thought our team really battled, played the way we wanted to play, to get in front, play from ahead. Give Andy and his team a lot of credit. They fought back; we knew they would. We thought they would and figured it would be a four-quarter game. They were able to make one more play than we did. So, give them credit. We’ll learn a lot from this. We competed hard tonight.”

The frustration was still evident as the Raiders left the field, though. Adams roughly pushed what appeared to be a member of the camera crew to the ground as he headed up the Arrowhead Stadium tunnel to the locker room.

“He jumped in front of me coming off the field. I kind of pushed him. He ended up on the ground," Adams said later. "I want to apologize to him for that. That was just frustration mixed with him really just running in front of me.

“I shouldn't have responded that way, but that's the way I responded. I want to apologize to him for that.”

The loss kept the Raiders in last place in the AFC West, a game behind Denver and well behind the Chiefs, who are aiming for their seventh consecutive division title. They have next week off before facing the Texans on Oct. 23, the start of a four-game stretch against non-division opponents that could allow them to climb back in the race.

“I thought our team battled and gave ourselves an opportunity,” McDaniels said Monday night. “We didn't make one or two plays there at the end to finish it.”