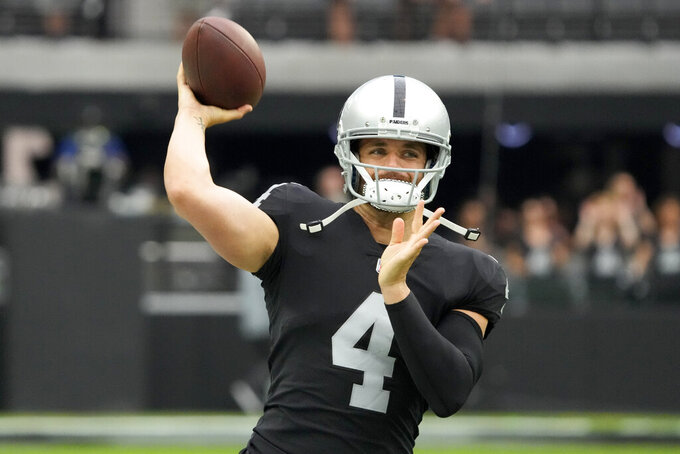 Josh McDaniels waited a long time for a second shot as an NFL coach.

After flaming out in less than two seasons running the show in Denver in 2009-10 and then spurning Indianapolis at the last second in 2018, McDaniels feels prepared to take over his own team again as coach of the Las Vegas Raiders.

McDaniels may be in better position to succeed in his second try thanks to having an established quarterback in Derek Carr, a team that is coming off a playoff berth and the knowledge he gained from failing in Denver and the decade-plus since then.

“I feel like I’ve learned a lot,” he said. “I feel like it’s slowed down for me for sure. It doesn’t mean anything at this point in time of the year. It doesn’t have any bearing on what’s going to happen down the road, but definitely feel a different comfort level now in terms of understanding what my role is and how to do it better.”

The new regime has instilled its version of the “Patriot Way” onto the Raiders to try to keep the focus on the field after a 2021 campaign that was nearly derailed by off-field issues.

Coach Jon Gruden was fired in October following the publication of old, offensive emails he sent and then promising receiver Henry Ruggs III was cut after being charged with DUI felonies following a crash that killed a woman.

The Raiders still managed to make the playoffs for just the second time in the past 19 seasons by winning their final four games. They hope to build on that this season with an improved roster and more stable environment.

“Last year was like such a different situation, different coaches, different GM, different philosophies,” Carr said. “Now, we’re into a new year and it’s nice that it’s just been all football. For the most part, every time I’ve gotten up here, we just were talking football, and that’s what we want to get to anyway.”

The biggest personnel move of the offseason came when the Raiders traded their two draft picks to Green Bay for All-Pro receiver Davante Adams. The deal reunited Adams with Carr, his close friend and former teammate at Fresno State. It also gives the Raiders the No. 1 receiver they had been missing and hopes that that will transform the offense.

Adams led the NFL with 432 catches, 5,310 yards and 47 TDs the past four seasons but feels there's still room to improve.

The offense is in good shape at the skill positions with Adams, tight end Darren Waller and slot receiver Hunter Renfrow forming one of the best receiving trios and Josh Jacobs leading a deep running back room. The question is on the offensive line, where left tackle Kolton Miller is the only proven player.

Last year's top pick, Alex Leatherwood, struggled at both right tackle and guard as a rookie and is hoping to lock down the starting tackle job across from Miller. Andre James is expected to return at center, with John Simpson, rookie Dylan Parham and Lester Cotton Jr. competing at guard.

Whether that unit can give Carr enough time to find his receivers will go a long way toward determining how much success Las Vegas has on offense.

The other big addition this offseason was edge rusher Chandler Jones, who replaces Yannick Ngakoue as the pass rusher opposite Maxx Crosby. Jones has been one of the most consistent pass rushers over the past decade, with double-digit sacks his last seven healthy seasons.

Crosby emerged as one of the top pass rushers in the league last season, giving the Raiders a formidable duo to help slow down the high-powered AFC West offenses.

The questions on defense come in the secondary after the Raiders' top cornerback from 2021, Casey Hayward, left in free agency. Slot cornerback Nate Hobbs was impressive as a rookie and the Raiders brought in Rock Ya-Sin and Anthony Averett to compete with returning starter Trayvon Mullen, who has been slowed by injuries.

Safety Tre'Von Moehrig showed promise as a rookie at deep safety, but it remains to be seen if 2019 first-round pick Johnathan Abram can improve enough in coverage to lock down the other spot.

The Raiders have a treacherous open and close to the season with a more manageable stretch in the middle. Las Vegas opens with a rematch of a Week 18 classic against the Chargers in Los Angeles, followed by games against 2021 playoff teams Arizona, Tennessee and Kansas City in three of the next four weeks, with a home date against Russell Wilson and the Broncos mixed in.

The final six games start with a home game against the Chargers, followed by five games against 2021 playoff teams: the Rams, New England, Pittsburgh, San Francisco and Kansas City.