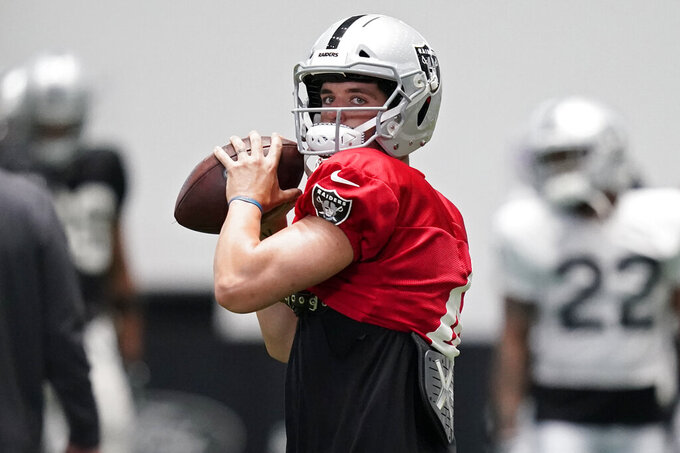 The Raiders have the ingredients in place to have a more dynamic offense.

Now the question is whether that can lead to more production for Derek Carr and Co. when it comes to scoring points. The Raiders are one of three teams that have failed to average 20 points per game in any of the past three seasons despite moving the ball well between the 20s last season.

They hope to change that starting with the opener Sunday at Carolina in their first game since moving to Las Vegas.

“We did a good job last year offensively,” coach Jon Gruden said Wednesday. “Our goal to go offense was horrific. I thought our red zone was pretty good, our third down was pretty good. We moved the ball pretty good. There’s two things that we have to do better. We have to do better in our goal to go offense. We walked away (six) times with nothing. We turned it over down there. We got shut out on downs down there from the one-inch line, I think four times. That’ll help things. We need more possessions. If you do, I think the statistical study, we don’t get the ball very often.”

The Raiders did have the second-fewest number of drives last season but even when they had the ball they didn’t do nearly enough when it came to scoring.

They ranked 21st by scoring on only 32.5% of drives and were 19th in scoring at 1.80 points per drive despite averaging the sixth most yards per drive.

While poor starting field position contributed to some of that ineffectiveness, an inability to finish drives was a bigger factor.

The Raiders had the second-lowest average points when getting into goal-to-go situations. They committed three turnovers, got stopped three times on fourth down and settled for three field goals, while scoring 14 TDs in 23 possessions after getting to goal to go.

“We have to be able to punch the ball in when we get in the red zone, that’s got to be a killer instinct where we’re not leaving without a touchdown,” Carr said. “We can’t leave the red zone with no points. Field goals are good at times, but I really think we need to finish in the low red especially. There’s a glaring weakness that we had last year that we tried hard at training camp to work on.”

Compounding the problem near the goal line, the Raiders were also tied for 24th in the league with only seven TDs on plays longer than 20 yards as they lacked big-play threats on offense.

That led to the move to draft the speedy Ruggs 12th overall ahead of more polished receivers like his Alabama teammate Jerry Jeudy and Oklahoma’s CeeDee Lamb.

Ruggs flashed that speed at the combine when he ran the 40-yard dash in an impressive 4.27 seconds. Back when Al Davis ran the team, that type of combine performance inevitably led to speculation that the Raiders would pick a player. Davis selected the fastest player at the combine in his final three drafts from 2009-11.

Ruggs’s performance caught the eye of many, including players who would become his teammate a few months later.

“One of my friends, we were watching the combine and we saw Henry Ruggs run his 40 and he was like, ‘It’s like a roach when you put the lights on,’” Waller said. “It’s as advertised or even crazier in person. It looks effortless, I know it’s not, but I haven’t seen anything like it.”

The Raiders will be counting heavily on Ruggs and third-round rookie Bryan Edwards, who are slated to start with Tyrell Williams out for the season with a shoulder injury.

“I’m very confident. Those are my guys,” Carr said. “That’s who’s on our team and that’s who we’re going to bat with. That’s who we’ve been equipped with. We got all we need, so we’re ready to rock."