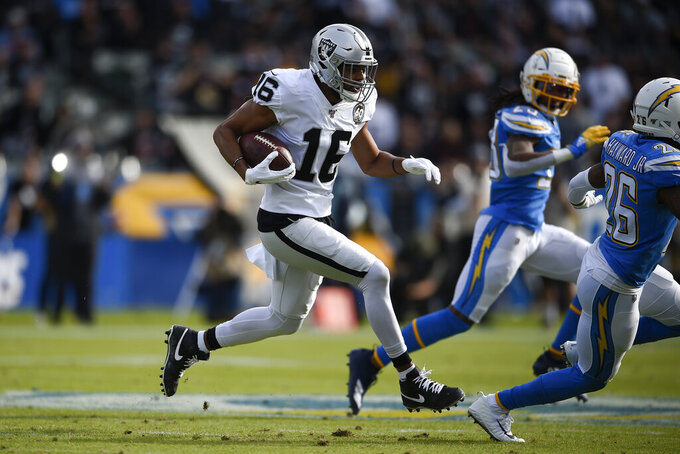 FILE - In this Dec. 22, 2019, file photo, Oakland Raiders wide receiver Tyrell Williams runs against the Los Angeles Chargers during the first half of an NFL football game in Carson, Calif. Las Vegas Raiders' Williams has a torn labrum in his shoulder that he will try to play through this season. A person with knowledge of the injury confirmed that Williams got hurt in practice last week. The person spoke on condition of anonymity because the team has not made any announcement. (AP Photo/Kelvin Kuo, File)

The Las Vegas Raiders have placed receiver Tyrell Williams on season-ending injured reserve with a torn labrum in his shoulder.

Williams got injured last month in practice and initially was going to try to play through the injury. He decided instead to have surgery and miss the entire season after being placed on IR on Tuesday.

This is the second straight year Williams has been hampered by injuries since signing a $44.4 million, four-year deal with the Raiders. He hurt his foot after four games last season but only missed two games before playing through the injury.

He finished his first season with the team with 42 catches for 651 yards and six TDs but his production waned after the first four weeks.

Williams has an $11 million guaranteed salary this season and is one of the highest-paid players on the team. He said earlier this summer he was fully healed and excited to contribute to the offense.

The move with Williams could clear the way for the Raiders to start two rookies at receiver in the season opener Sept. 13 at Carolina. First-rounder Henry Ruggs III was slated to be one of the starters and third-rounder Bryan Edwards is now in the mix to fill Williams’ role, along with veteran Nelson Agholor.

The Raiders have started only six rookie receivers in a season opener since the merger, with the only year they started two coming in 2009 with Darrius Heyward-Bey and Louis Murphy.

Five teams have started a pair of rookies at receiver in Week 1 since 2000 with the Ravens the most recent last season with Marquise Brown and Miles Boykin.

The other receivers expected to get playing time are second-year slot receiver Hunter Renfrow and Zay Jones, who has 110 career catches in three seasons with Buffalo and the Raiders.