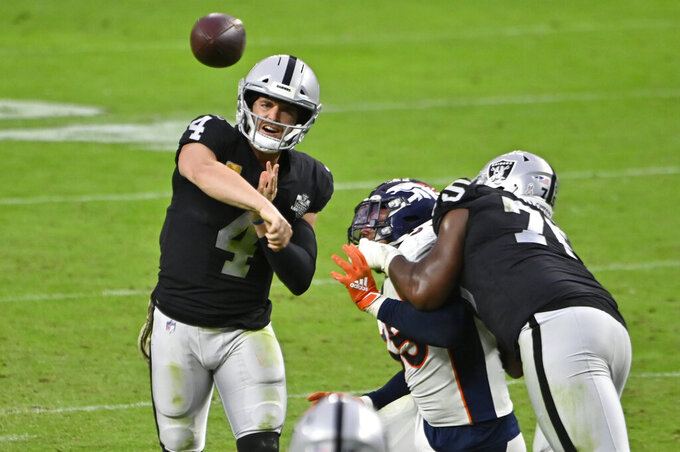 LAS VEGAS (AP) — For most of Derek Carr's career with the Raiders, he's had to carry a heavy load whenever the team had success.

That's what made this game so enjoyable with a powerful running game and opportunistic defense stepping up.

Josh Jacobs ran for 112 yards and two TDs and Jeff Heath had two of Las Vegas’ five takeaways to help the Raiders beat the Denver Broncos 37-12 on Sunday for their third straight win.

“It’s kind of awesome,” Carr said. “As I get older, I let the young guys do more of the work. It’s kind of nice that we can win in multiple ways. Coach preaches it all the time, once we find what’s working, we’re going to keep doing that.”

The Raiders (6-3) have topped 150 yards rushing in three straight games for the second time in the past 10 seasons and the defense has shown signs of improvement of late capped by the four interceptions and one fumble recovery for a team that entered the game tied for the fewest takeaways in the league with five.

“I know that the game starts with the run and ends with the run. That's a testament to the O-line,” Jacobs said. “The last three weeks in a row we've had 150-plus yards on the ground. It's good to see we’re putting our dominance on the game.”

Heath intercepted Drew Lock twice in the first half, Carl Nassib and Nick Kwiatkoski got picks in the fourth quarter and Nevin Lawson forced and recovered a fumble by DaeSean Hamilton to send the Broncos (3-6) to their third loss in four games.

The game changed late in the first half after Lock appeared to run in for a TD in the closing seconds that would have given the Broncos a 13-10 lead.

Tight end Noah Fant was called for holding in the end zone on the play and Lock threw his second interception to Heath on the next play.

“Obviously, everybody’s disappointed,” Broncos coach Vic Fangio said. “All of our fingerprints are on that game — coaches and players. Nobody’s happy about it, obviously. In fact, everybody’s probably very disappointed and disgusted by it, that a 10-6 game at halftime can turn out like that. But turnovers will do that to you.”

The Raiders then put the game away with two long scoring drive in the third quarter, leading to a 52-yard field goal by Daniel Carlson and a 5-yard TD run for Jacobs’ second score.

Carlson added another field goal and Devontae Booker added two late TD runs against his former team, sending the Raiders to their most lopsided win in the series since a 59-14 victory Oct. 24, 2010.

Las Vegas has now won three straight and is firmly in the playoff hunt with a showdown at home against division-leading Kansas City (8-1) up next.

“We don't have much time to celebrate,” coach Jon Gruden said. “We have to play the Chiefs. We had 87 punt return yards called back. We had a penalty on fourth-and-inches. We left some plays out there that our guys are capable of making.”

Carr went just 16 for 25 for 154 yards, his third straight game under 200 yards passing. But the Raiders have won all three thanks to an improved running game and defense.

“It was pretty normal looks we were expecting,” Lock said. "I just didn’t put the ball in our receivers’ hands. I put it in their hands. Could’ve been some better plays there by me without a doubt.”

Denver receiver Tim Patrick and Las Vegas defensive back Isaiah Johnson were ejected following a scuffle in the fourth quarter. Patrick hit Raiders safety Johnathan Abram in the helmet after getting pushed following a play. Johnson then retaliated with a swing at Patrick.

A couple of special teams blunders by Denver returner Diontae Spencer and a good punt by Las Vegas’ A.J. Cole forced the Broncos to start three of their first four drives of the game inside their 10-yard line. That was the first time the Broncos started three first-half drives inside their 10 in seven years. The results predictably weren’t good with two three-and-outs and an interception.

The storyline coming into the game was the two first-round receivers out of Alabama. But neither Jerry Jeudy nor Henry Ruggs III had big games. Jeudy had four catches for 68 yards for the Broncos, while Ruggs had three for 31 yards for the Raiders.

Broncos: Lock appeared to hurt his ribs after a hit in the first half from Arden Key but stayed in the game.

Raiders: RB Jalen Richard left the game with a chest injury after a hard hit on a kickoff return in the first half. X-rays were negative.