Rams, Bucs meet in matchup of past 2 Super Bowl champions 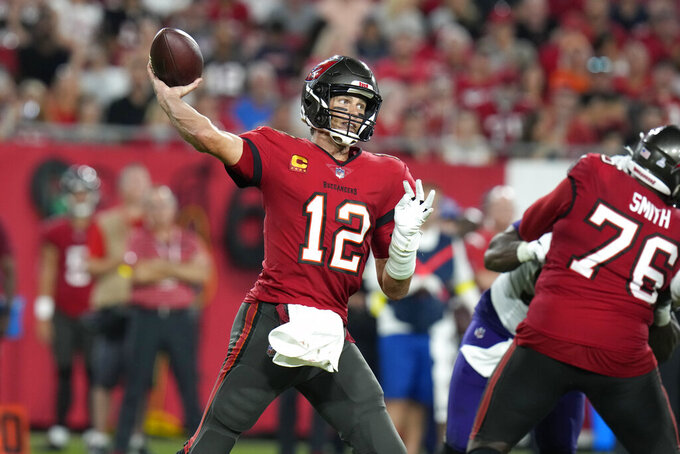 TURNOVER DIFFERENTIAL: Rams minus-5; Buccaneers plus-2

BUCCANEERS PLAYER TO WATCH: QB Tom Brady has lost three straight starts for the first time in 20 years. And while he leads the NFC with 2,267 yards passing and has only thrown one interception — none in the past seven games — the seven-time Super Bowl champion has just nine TD passes. Tampa Bay is averaging 18.3 points per game, 25th in the NFL.

KEY MATCHUP: Los Angeles pass rush led by DT Aaron Donald against Bucs offensive line. The Rams’ ability to pressure Brady in the pocket has been one of the keys to the team’s 3-0 record against the Bucs since 2020.

SERIES NOTES: The Rams are facing the Bucs for the fourth time since Tom Brady left New England for Tampa Bay in 2020. Los Angeles has won the previous three meetings, including last January’s playoff matchup at Raymond James Stadium.

STATS AND STUFF: At 3-4, the Rams are below .500 for only the third time in coach Sean McVay’s six seasons. All three instances happened this season. The Rams have never been at .500 or worse at this point in a season under McVay, and Los Angeles has never been two games below .500 in his tenure. ... The Rams have won eight of their past nine meetings with Tampa Bay, losing only in September 2019 when Jameis Winston threw four TD passes to outlast a Rams offense that had 518 yards in the Bucs’ 55-40 victory. ... QB Matthew Stafford is second in the NFL with eight interceptions despite throwing just three in the past five games. ... The Rams are tied for third worst in the NFL with a minus-5 turnover differential. Only six teams have forced fewer than the Rams’ eight takeaways, although the defense has been solid in most other areas. ... Tyler Higbee needs two more touchdowns to become the franchise leader in TDs by a tight end. He is the only player remaining from the Rams first draft class after their return home to LA in 2016. ... WR Cooper Kupp needs three catches against Tampa Bay to become the second-fastest player in NFL history to reach 500 receptions. He also needs 98 yards receiving to pass Elroy “Crazy Legs” Hirsch for fourth place in Rams history. ... Former Bucs K Matt Gay is 9 of 10 on field goals and 13 of 13 on extra points this season, his third with the Rams. His only miss was on a 51-yard attempt last month. ... The Bucs have dropped three straight games and matched their loss total for all of last season, including a playoff setback against the Rams. ... QB Tom Brady has lost three straight starts for the first time since 2002 and is two games under .500 for the first time in a 23-year career. ... Brady has thrown 315 consecutive passes without an interception and is 164 yards away from becoming the first in NFL history to reach 100,000 yards passing (including postseason). ... WR Mike Evans needs 122 yards receiving to join Jerry Rice, Calvin Johnson, Marvin Harrison, Randy Moss and Larry Fitzgerald as the only players in league history to amass at least 10,000 yards and 75 touchdowns receiving in the first nine years of a career. ... The Bucs defense, among the league’s best at taking the ball away in recent seasons, has not forced a turnover in the past four games.