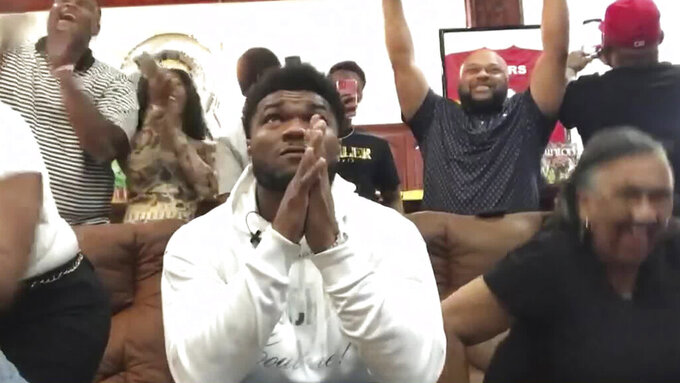 In this still image from video provided by the NFL, Cam Akers, center, reacts as he's selected by the Los Angeles Rams during the second round of the NFL football draft, Friday, April 24, 2020. (NFL via AP)

LOS ANGELES (AP) — The Los Angeles Rams went right to work patching the biggest holes in their lineup when they finally got some picks in the NFL draft.

The Rams drafted possible replacements for Todd Gurley and Brandin Cooks in the second round Friday night, grabbing Florida State running back Cam Akers with the 52nd overall pick and Florida receiver Van Jefferson with the 57th overall pick.

The Rams then addressed two more areas of recent losses in the third round by adding Alabama edge rusher Terrell Lewis with the 84th overall pick and Utah defensive back Terrell Burgess with the 104th pick.

After sitting out the first round Thursday, the Rams got rolling with a replenishment of their offensive skill-position talent. The Rams released Gurley and traded Cooks in money-saving moves over the past several weeks, but they quickly found intriguing prospects to take their roles in coach Sean McVay's offense.

Although they drafted Darrell Henderson in the third round just last season, the Rams decided they needed another top ball-carrier after releasing Gurley, their starting running back and the NFL’s leader in touches and touchdowns over the past half-decade. Akers was among the draft's top running back prospects after three years at Florida State.

“As far as filling Todd Gurley’s shoes, I’m just going to come in and play,” Akers said in a video conference call from his childhood home in Mississippi. “Wherever the team needs me to be, whatever they need me to do, that’s what I’ll do.”

Akers was one of the most productive running backs in Seminoles history despite playing for the program in a time of upheaval and poor offensive line classes. He rushed for 1,144 yards and 14 touchdowns last season despite facing defenses clearly keyed on stopping him in every game, Snead said.

“I think I (can) be a three-down, a four-down back if necessary," Akers said. "I’m somebody who can come in and be a game-changer. Be everything this team and the fans need me to be and everything they’re expecting me to be.”

Akers is likely to compete for playing time with Henderson, the presumptive starter after Gurley's departure, and longtime backup Malcolm Brown. The Rams' first selection surprised many observers who thought Henderson would be given a chance as LA's unquestioned starter, but Snead prioritized game-changing offensive talent over depth at thinner positions.

The Rams then grabbed Jefferson with the pick they acquired from Houston in the recent trade that sent Cooks to the Texans. Jefferson is coming off two productive seasons for the Gators after transferring to Gainesville from Ole Miss.

Jefferson is the son of former NFL receiver Shawn Jefferson, and he received praise for his precise route running and smart play. Many draft observers compared him to Cooper Kupp and Robert Woods, his new teammates in Los Angeles.

“I want to learn from those guys, take in as much information as I can from them,” Jefferson said. “They’re some of the greats right now. ... It’s a huge receiver class, but I consider myself one of the top guys in this class.”

The Rams addressed key defensive needs with both of their third-round picks. Lewis could fit in as a replacement for departed pass rushers Dante Fowler and Clay Matthews, while the multi-talented Burgess is a logical competitor for Nickell Robey-Coleman’s former job as Los Angeles’ nickel back.

Lewis is a potential steal, given the elite talent he displayed during his career with the Crimson Tide. He's also a significant risk due to his injury history: He missed most of the 2017 season with an arm injury, and he sat out the entire 2018 season with a torn knee ligament.

Lewis returned with a strong performance last year, but his injuries clearly scared off many teams. The Rams were undeterred.

“He's had some injuries, but I think they've been some freak instances,” McVay said. “You look at when this guy is able to play and he's healthy ... I was really excited to be able to get him."

Lewis suspected he might get picked by the Rams after outside linebackers coach Chris Shula built a strong relationship with him during pre-draft workouts.

“He stressed to me that, ’Hey, we need a guy like you, and you fit our system,'” Lewis said. “I think it’s a high chance that I contribute and be a substantial player for the Rams’ defense.”

Burgess starred at Utah after growing up in the North County area above San Diego. He played every position in the secondary for the Utes, and he could be a strong candidate to replace Robey-Coleman.