Rams not bothered by only 2 Pro Bowl nods for No. 1 defense 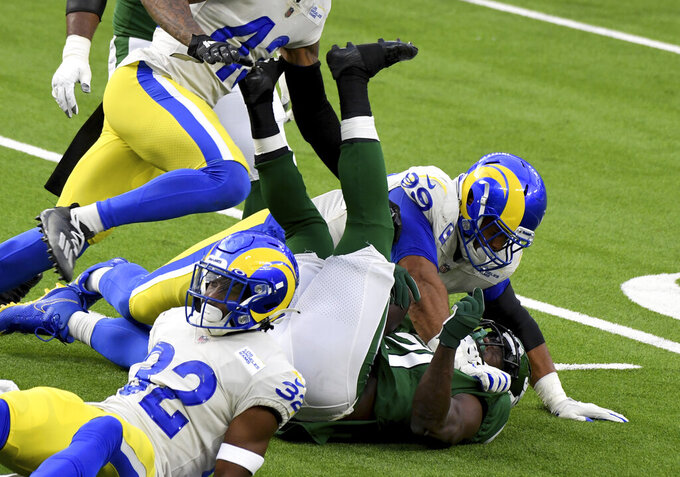 LOS ANGELES (AP) — The Los Angeles Rams have the NFL's No. 1 total defense, its No. 1 pass defense and its No. 2 rushing defense. Aaron Donald's group is second in the NFL in sacks and third-down conversion percentage, third in points allowed and fifth in takeaways.

By almost any collective measure, the Rams' defense has been the class of the league under rookie coordinator Brandon Staley. Yet when the Pro Bowl teams were announced this week, the Rams (9-5) had just two members — Donald and cornerback Jalen Ramsey.

The math doesn't really add up for a defense of the Rams' accomplishments this season.

But at least publicly, neither the Rams nor their next opponents are reading anything into the lack of attention given to the supporting cast on a unit that has carried Los Angeles' inconsistent offense to the brink of another playoff berth.

“Well, their whole defense is playing like a Pro Bowl defense,” said Pete Carroll, whose Seahawks (10-4) could clinch the NFC West with a home victory over the Rams on Sunday.

“Their whole crew is tough to deal with,” Carroll added Wednesday, immediately citing pass rusher Leonard Floyd and linemen Michael Brockers and Sebastian Joseph-Day. “(The Pro Bowl selections) would be frustrating to them, because you can't have much of a better year than they're having. But that's Pro Bowl voting, too. They don't always catch up with the start of a good group like this.”

Indeed, Pro Bowl voting inherently rests upon the individual reputations of players over the collective achievements of a group. Donald and Ramsey already are widely recognized as two of the NFL's best at their positions, while none of the rest of the Rams' defense has that distinction yet.

Carroll saw that dynamic play out with his Legion of Boom defenses in the 2010s, and he won't be surprised if the Rams get the same treatment — particularly if they keep their group together under Staley next year.

“It's likely that these guys who play so well together this year will be recognized next year as they do it again next year,” Carroll said.

The most obviously overlooked candidate for individual recognition is cornerback Darious Williams, who has four interceptions in his breakout season as one of the NFL's top-graded cover men. Ramsey touted his teammate for Pro Bowl consideration several times this season, but Williams couldn't crack a four-man NFC group of Ramsey, New Orleans' Marshon Lattimore, the Giants' James Bradberry and Green Bay's Jaire Alexander.

The Rams' entire secondary has exceeded most expectations. Safety John Johnson is playing superbly into free agency, leading Los Angeles in tackles and captaining the defense on the field, while rookie safety Jordan Fuller has performed much better than anyone outside the Rams suspected when they chose him with a sixth-round pick.

“I do feel like a lot of our other players are deserving,” Staley said of the Pro Bowl choices, citing Williams, Johnson and Floyd in particular. “But I think every coach in the NFL is going to say that about their players.”

“It’s a selective event, and there’s going to be disappointment,” Staley added. “I think that more than anything, we’re just so glad that we’re competing for something as a team. We’re really proud of what we’ve accomplished so far as a defense. Regardless of who made the Pro Bowl or not, our players are going to benefit from this season one way or the other.”

Rams quarterback Jared Goff knows exactly how much a Pro Bowl selection means. He has been chosen for two Pro Bowls, including the 2018 game in which McVay's first Rams team had eight representatives.

“We’ve had years where we’ve had six, seven guys make the Pro Bowl, and I think we lost in the first round of the playoffs, and you’re not too pleased about it,” Goff said. "I think the Pro Bowl is a cool thing. It’s awesome. Congrats to everyone who made it, but as a team, we have bigger goals.”

NOTES: The Rams held only a walkthrough Wednesday while doing much of their game plan installation for the holiday week. McVay said RT Rob Havenstein would have been limited with a shoulder injury if Los Angeles had practiced, but he expects the veteran to be ready for Sunday. ... RB Cam Akers won't play this week with a high ankle sprain, McVay repeated. ... Rookie LB Terrell Lewis is likely ready to return to the lineup after missing time with a knee injury. ... The Rams will practice at SoFi Stadium on Christmas Eve due to high winds in Thousand Oaks.