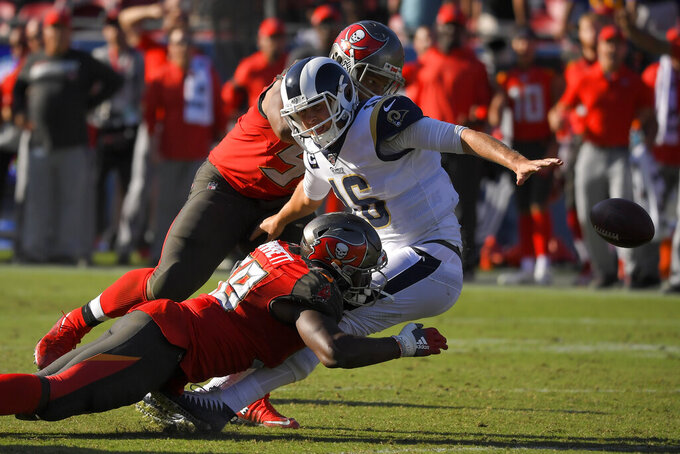 Tampa Bay Buccaneers linebacker Shaquil Barrett forces a fumble by Los Angeles Rams quarterback Jared Goff during the second half of an NFL football game Sunday, Sept. 29, 2019, in Los Angeles. The fumble was returned by a touchdown by the Buccaneers. (AP Photo/Mark J. Terrill)

One minute, the reigning NFL Offensive Player of the Year was saying that coach Sean McVay and quarterback Jared Goff have everything under control. Then, when asked why he carried the ball only five times and the Rams called the fourth-highest percentage of passing plays in an NFL game since 1991, he turned to the one line frequently uttered when star players are frustrated.

"I don't call the plays, I go out there and play," he said after having only five carries for 16 yards. That is the least amount of carries the fifth-year running back has had in a regular-season start.

In a matter of four weeks, Gurley has gone from one of the league's workhorse backs to an afterthought.

When asked if the decreased offensive production was due to nagging problems with his left knee, Gurley glared at reporters.

Of the 81 offensive plays, 87.5 percent (or 70 plays) were passes. According to Sportradar, the lopsided distribution was tied for fourth highest in the league in the past 29 seasons. McVay's previous high in passing plays was 79.4 percent in a loss to Chicago last year.

The large percentage of passing plays can be mostly attributed to the Rams falling behind 21-0 midway through the second quarter, but when the Rams trailed by only a touchdown for the first 20 minutes they passed on all but one of the first 14 plays. The running play was a reverse to wide receiver Cooper Kupp that ended up losing 2 yards.

When Gurley did carry the ball he was productive. Two of his carries were for touchdowns. His 13-yard burst off right tackle, where he carried a pair of Tampa Bay defenders 3 yards into the end zone, brought the Rams within 21-7 in the second quarter. He also had a 5-yard carry up the middle for his second score in the fourth quarter where he broke a couple tackles.

McVay once again said that he is not conserving his running back for late in the season.

"No, there's none of that. We're doing what we can to try to find a way to win games," he said. "It's not about conserving, we've got to win right now and that's the most important thing. There's nothing like that."

But by relying too much on the pass, Goff is facing a lot of pressure in the pocket. He was hit nine times on Sunday and sacked twice.

"They did a great job defensively applying that pressure and keeping it on all day. They did a good job," Goff said. "We've got to be better regardless, but they did do a good job bringing pressure."

The Rams are 3-1 but will quickly have to make adjustments with their next two being key division games. They travel to Seattle (3-1) on Thursday and host San Francisco (3-0) on Oct. 11.

Goff and McVay will need to find a way to get Gurley more involved if they want to win the NFC West for the third straight season.

"We do want to get him involved more and do want to do that, but it's dictated game-by-game," Goff said.

"It's frustrating, for sure but I think I try to have a good perspective on it, knowing it's only Week 4. Let this one go by as quick as possible, because we've got to go up to Seattle on Thursday," Goff said.