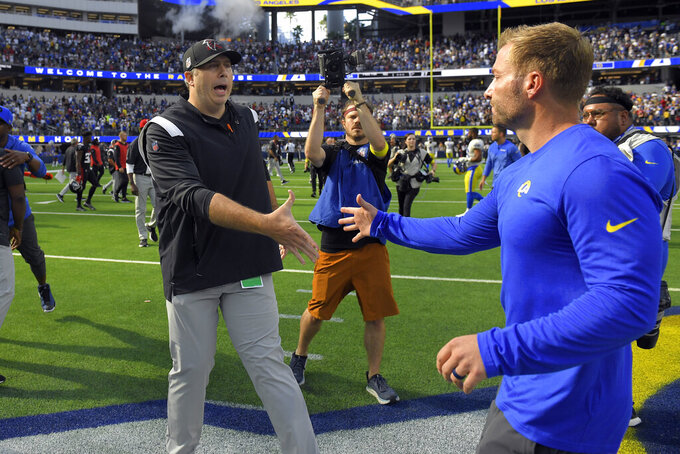 The Rams (1-1) signed McKinley on Tuesday after dealing with an injury scare involving pass rusher Leonard Floyd. He hurt his knee in practice last week but was able to play in the 31-27 win over the Atlanta Falcons, putting defensive coordinator Raheem Morris on the lookout for more depth.

McKinley had signed to Tennessee’s practice squad last week, showing he had made enough progress in his recovery after tearing his Achilles tendon while playing for Cleveland last December to become an option.

Morris knows McKinley. He was an assistant coach with Atlanta when McKinley was drafted No. 26 overall in the 2017 NFL draft, saw him show promise by getting 13 sacks in his first two seasons, only to see McKinley waived when Morris was serving as interim coach in November 2020.

Morris admitted their professional relationship was “rocky,” but he and McKinley always got along. When there was a chance to give McKinley another opportunity, Morris was all for it.

“He’s a guy I know can help us in the pass rush, and he’s a guy I think deserves a second chance, and hopefully he’ll come in and do some really good things for us,” Morris said.

McKinley doesn’t know if he will be active against Arizona Sunday, noting that practice on Thursday was the first time he had worked out in a helmet and shoulder pads since the injury.

But whenever he does get on the field, McKinley is looking forward to playing alongside standout defensive tackle Aaron Donald, who has helped revive the career of Floyd and fellow edge rusher Dante Fowler Jr.

McKinley wasn’t the only familiar face the Rams added this week, signing veteran running back Malcolm Brown to the practice squad Thursday.

Brown, 29, played his first six seasons for the franchise in St. Louis and Los Angeles. He rushed for 1,188 yards and 11 touchdowns in that span, with his most productive campaign coming in 2020 as he formed an effective trio with Cam Akers and Darrell Henderson Jr.

Offensive coordinator Liam Coen believes there is value in having an experienced player like Brown around.

“Malcolm is a pro’s pro. Just does everything the right way, both on and off the field,” Coen said. “He’s just a great example. And he can make plays, man. He’s had some of the best blitz pickups that we’ve ever had here. He’s had some great runs.”

Los Angeles also signed tight end Kendall Blanton from the Chiefs’ practice squad Thursday. It gave the Rams another option on the active roster after tight end Brycen Hopkins was suspended three games Wednesday for violating the NFL’s substance abuse policy. Blanton originally signed with the Rams as an undrafted free agent in 2019 and started in their Super Bowl win in January before being waived during training camp in August.