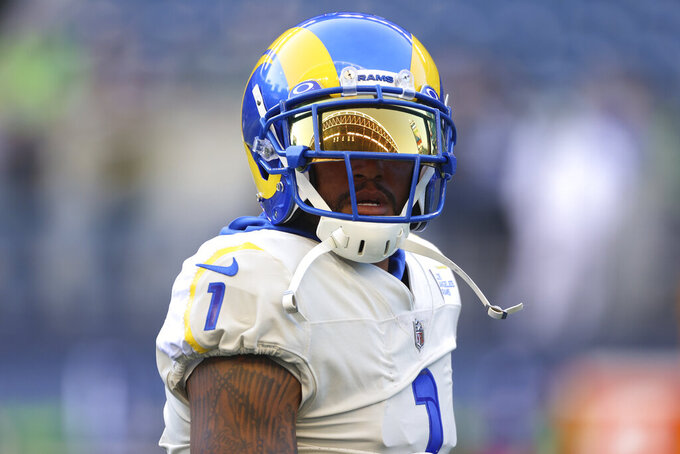 Jackson will be available on the waiver wire Wednesday, general manager Les Snead said Tuesday. The Rams spent the past five days trying to find a trade partner for the 14-year NFL veteran, and he didn't suit up for Los Angeles' blowout win at Houston.

Jackson, who turns 35 on Dec. 1, asked to leave the Rams last week after making just eight catches for 221 yards and a touchdown in his first seven games with Los Angeles. The Rams signed him to an incentive-weighted, one-year contract with a guaranteed $2.75 million salary last spring to reunite him with Sean McVay, his offensive coordinator in Washington.

The Rams wanted Jackson to be the defense-stretching deep threat they lacked last season, and he filled that role well when he was on the field. But Jackson's playing time was infrequent, with second-year pro Van Jefferson taking about three-quarters of the Rams' offensive snaps alongside Cooper Kupp and Robert Woods, who rarely leave the field for Matthew Stafford's prolific passing offense.

Jackson posted a farewell message on Instagram: “I am very grateful for the time that I spent playing for the LA Rams. Although this isn’t the outcome that we wanted, I am extremely appreciative for the opportunity & support given to me by the Rams Coaches & all of the Fans. I understand that everything happens for a reason & I look forward to beginning the next chapter of my NFL career.”

Jackson was healthy this season after playing in only eight games over the previous two seasons in Philadelphia because of injuries.

Jackson got only 15 targets on the Rams' offense, but he likely would have received more playing time in the second half of the season if he had stuck around. The Rams are surging toward a playoff berth, and they would like to decrease the heavy playing time of Kupp — the NFL's leading receiver in several statistical categories — and Woods.

Snead said the Rams won't necessarily sign another veteran receiver to fill out the roster, noting they could promote a player from the practice squad to help out on special teams.