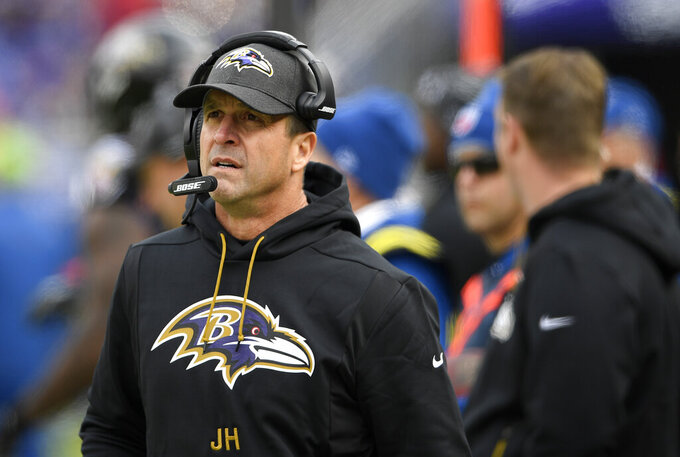 FILE - In this Sunday, Nov. 18, 2018 file photo, Baltimore Ravens head coach John Harbaugh walks on the sideline in the first half of an NFL football game against the Cincinnati Bengals in Baltimore. Ravens coach John Harbaugh has received a new four-year contract following a season in which he guided Baltimore to the AFC North title. The new deal is designed to keep the winningest coach in Ravens history under contract through the 2022 season. It replaces a pact that was slated to end after next year. (AP Photo/Nick Wass, File)

The new deal is designed to keep the winningest coach in Ravens history under contract through the 2022 season. It replaces a pact that was slated to end after next year.

The 56-year-old Harbaugh took over as Ravens coach in 2008. Under his guidance, the team has reached the playoffs seven times and won a Super Bowl.

His record in Baltimore is 114-78, including 10-6 in the postseason. Among current NFL coaches, Harbaugh has the fourth-longest tenure in the league.

"I'm very excited with this contract, the opportunity to continue our work here, and I'm humbled by it," Harbaugh said in a statement on the team website. "I am thankful for the support from the Ravens, especially (owner) Steve Bisciotti."

The Ravens had gone three straight years without a playoff berth before rallying behind rookie quarterback Lamar Jackson to win the division crown this season with a 10-6 record. Baltimore lost to the Los Angeles Chargers in the wild-card round.

Bisciotti ended speculation about Harbaugh's status before the Ravens faced the Chargers on Dec. 22, issuing a release that stated Harbaugh would be back in 2019 and that the sides were working on an extension.

Soon after the Ravens finished their season on Jan. 6, Harbaugh began looking toward next year. He promoted Greg Roman to offensive coordinator and got a jump on the draft at the Senior Bowl.

"We're working hard to make the 2019 Ravens the best we can be," Harbaugh said. "We have an excellent team foundation."

Harbaugh salvaged the 2018 season by turning toward Jackson, a former Heisman Trophy winner and a first-round pick in the draft. Jackson took over for injured veteran Joe Flacco and maintained the job after Flacco was ready to play.

Baltimore went 6-1 with Jackson as a starter before falling in the playoffs.

The Ravens are one of only six NFL teams to reach the playoffs at seven times in the past 11 years. Baltimore's 10 postseason wins since 2008 rank second only to New England.