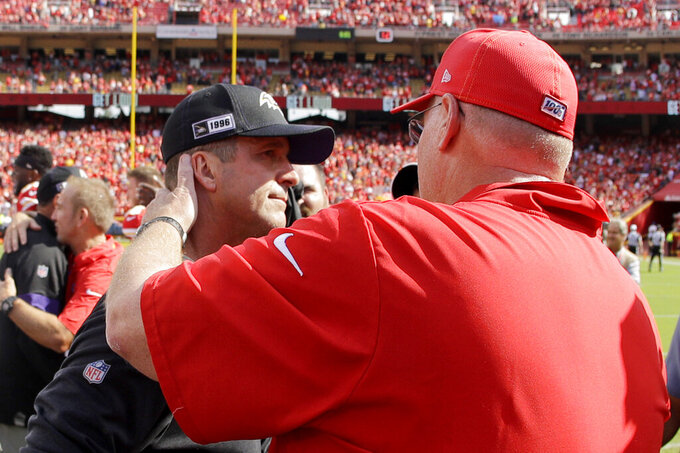 KANSAS CITY, Mo. (AP) — The analytics kept telling John Harbaugh to roll the dice on fourth down, or gamble for a 2-point conversion when the Baltimore Ravens finally hit pay dirt against the Kansas City Chiefs.

None of that number crunching paid off Sunday.

The fourth-down attempt near midfield was stuffed, and the Chiefs took advantage of the short field to strike quickly for a touchdown. And all three of those 2-point conversion attempts also came up empty — six points that would have covered the margin in a 33-28 defeat.

"We had a mindset that we were going to come in and try to score as many points as we could. So, that's what we tried to do," Harbaugh explained. "I know we all felt the same way. We're going to keep playing. We're going after it. That's the way we're going to play all year."

Asked whether Harbaugh ever second-guessed himself, he replied: "No. We don't play scared."

Despite the missed opportunities, the Ravens still nearly came back from a 30-13 fourth-quarter hole. Mark Ingram started the comeback with his third touchdown run — the 2-point conversion naturally failed — and Justin Tucker added a 39-yard field goal to make it 30-22 with 6:39 to go.

Harrison Butker answered at the other end for Kansas City, making it a two-possession game, but the Ravens breezed 70 yards in just over 2 1/2 minutes to score again. Lamar Jackson capped the drive by scrambling to his right and beating the entire Kansas City defense to the pylon.

Once more, the Ravens attempted a 2-point conversion, trying to get within a field goal should they get the ball back. And once more, the Chiefs' defense was up to the challenge, forcing Jackson out of bounds short of the pylon to preserve their 33-28 advantage.

It wound up being a moot point.

The Ravens tried to get the ball back with a rare dropkick, but Chiefs rookie Mecole Hardman calmly signaled for a fair catch. And when the Chiefs' Patrick Mahomes found backup running back Darrel Williams with a 16-yard screen pass on third-and-9 with 1:51 to go, that was it for Baltimore.

Mahomes kneeled twice more to run out the clock.

"We wanted to be aggressive. If those things would have went our way it would have been a little different," Ravens tight end Mark Andrews said. "Obviously they didn't go our way today and that's tough, but again, we've got to execute better. I love the aggressive mindset."

One big reason for that approach had to do with the opposing offense.

The Chiefs rolled into the game having scored at least 26 points in an NFL record 23 straight games, and Mahomes has been building nicely on his MVP season through the first two weeks.

So even though the Chiefs were missing three starters on offense — wide receiver Tyreek Hill, running back Damien Williams and left tackle Eric Fisher — the Ravens figured they would still need to score every point they could to keep up.

"The Chiefs have a great offense, an explosive offense," Jackson said. "Our job is to finish and keep our defense off the field as much as we can. We didn't do that today."

Kansas City was ready for it, too.

Chiefs coach Andy Reid had noticed the Ravens go for it on fourth down more than just about any team in the league, and they're just as aggressive when it comes to conversions. Jackson's uncanny ability to scramble away from the pocket for positive yards is a big reason for it.

"This isn't something that caught us by surprise. They love doing that," Reid said, "and they have the firepower to do it. You have to be on your toes."

Turned out the Chiefs were up to the task.