Ravens' defense a question mark after late leads slip away 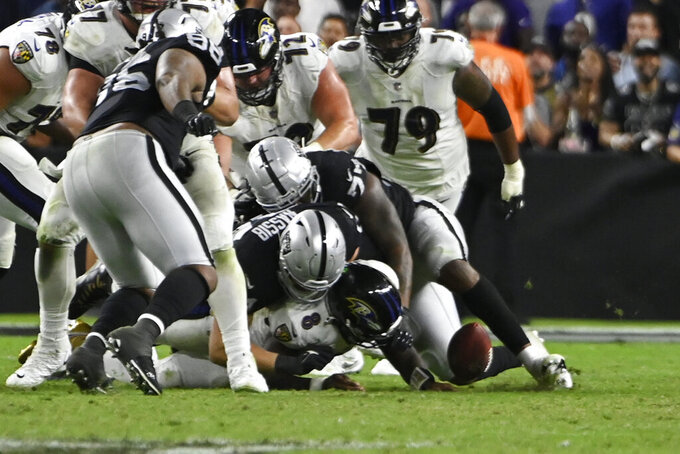 Marlon Humphrey was beaten so badly on the winning touchdown that he slowed to a jog while the pass was still in the air.

It was that kind of night for Baltimore's secondary.

The Ravens arrived in Las Vegas determined to show that they could still play to their usual standard despite a rash of preseason injuries.

Instead, Baltimore fell 33-27 to the Raiders in overtime — and it was hard not to think about the missing players who could have helped.

Much of the attention lately has been on Baltimore's backfield, which was ravaged by season-ending injuries to J.K. Dobbins and Gus Edwards. But the secondary was hurting too with Marcus Peters (knee) gone for the year and Jimmy Smith (ankle) out for this game.

Derek Carr threw for 435 yards and two touchdowns for Las Vegas, and with the game on the line, the Ravens could do little to slow the Raiders. Las Vegas scored on four of its final five possessions, and the one stop by Baltimore came on a fluky interception that caromed to Anthony Averett in the end zone in overtime.

“I was very, very happy with the team’s effort. The toughness, the resiliency, fighting back,” Ravens coach John Harbaugh said. “Even there at the end, the example is the goal-line stand, those are the kind of things that make us who we are as a team. We just didn’t close the game out when we had the opportunity to do it, three or four times.”

That interception gave the Ravens new life, but the offense couldn't take advantage, and when Lamar Jackson lost a fumble for the second time in the game, Baltimore was on the ropes again. Carr ended it with a 31-yard touchdown pass to Zay Jones.

“That ticked me off. I hate fumbles," Jackson said. “I hate any type of turnover.”

The Ravens led 14-0 at one point and took a 27-24 lead on Justin Tucker's field goal with 37 seconds remaining — only for the defense to allow two quick completions, which put Las Vegas in position for a long field goal that forced overtime.

Baltimore's big priority this offseason was shoring up the passing game, and newly acquired receiver Sammy Watkins had a nice night with four catches for 96 yards. Jackson had a quarterback rating of 118.8.

The Raiders certainly used tight end Darren Waller effectively, targeting him 19 times. He caught 10 passes for 105 yards and a touchdown, but by the end of the game, the Ravens were having trouble covering anyone.

“We have a lot of fight and a lot of heart, but we have a lot of room for improvement,” defensive end Calais Campbell said. “Where we're at right now, I just feel like this was a tough one.”

Ty'Son Williams ran for 65 yards on nine carries in his NFL debut and broke free for a 35-yard touchdown. He also had three catches for 29 yards.

Despite all the injuries, the Ravens rushed for at least 100 yards for a 40th consecutive game. They are now three games shy of the record set by the Pittsburgh Steelers during the 1970s.

Baltimore did release running back Trenton Cannon on Tuesday.

It wasn't a great night for the offensive line, which allowed three sacks — including the one that caused Jackson's second fumble.

“Sometimes you can’t go through your reads, you got to make something happen,” Jackson said. "That’s what I tried doing on that last one. I saw it breaking down, try to push a lineman, try to get out of the pocket and he hit me while I’m doing it. So, I’ll try and hold onto the ball next time.”

Offensive lineman Tyre Phillips was carted off with a knee injury and did not return. He was put on injured reserve Tuesday.

98 — Before Monday, the Ravens had won 98 straight games in the regular season when leading by at least 14 points.

The next test for the Ravens and their struggling secondary figures to be even harder. They host Kansas City on Sunday night. Between now and then, Baltimore will need to evaluate the veteran running backs the team brought in recently. Le'Veon Bell and Devonta Freeman have been on the practice squad. Latavius Murray was active and had 10 carries for 28 yards and a touchdown Monday.