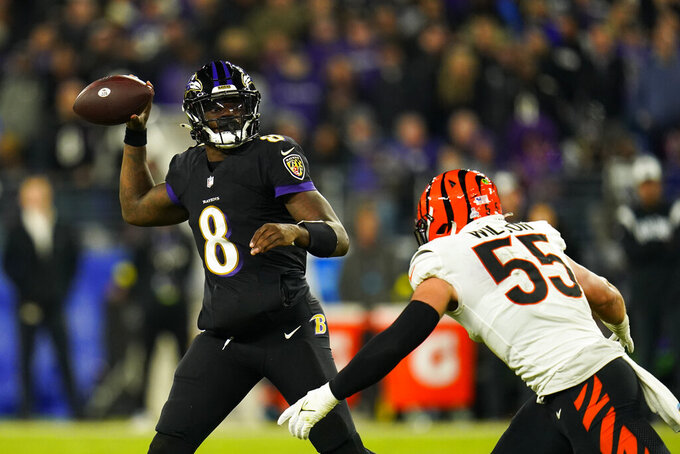 EAST RUTHERFORD, N.J. (AP) — There have been a lot of people looking forward to the Baltimore Ravens' game against the Giants since coach Brian Daboll hired Wink Martindale to run New York's defense in early February.

It was going to be grudge match. It was Martindale against Ravens coach John Harbaugh, the man who fired him on Jan. 21 after 10 seasons in Baltimore, the last four as defensive coordinator.

The story line has not panned out. Harbaugh and Martindale have said this week their parting was by mutual agreement. Martindale went so far as to say he needed a change.

What's really at stake on Sunday at MetLife Stadium is this is another important game for the Ravens (3-2) and Giants (4-1) in their efforts to get back to playoffs.

The Giants' start is their best since going 5-0 to open the 2009 season. The four wins have been by a total of 17 points.

“You got to focus on what you can control because I’ve said it before: This league will humble you very quickly,” Daboll said. “And there’s certainly a lot of things we can do better from a coaching staff to players, all of us collectively as an organization. That’s where we’re at.”

The Ravens have had ups and downs. They beat Cincinnati last weekend on a last-second field goal and lost to Buffalo the week before on an another game-ending kick.

Harbaugh expects another tough game this week, especially with Martindale on the opposing sideline. He might unleash a ton of blitzes or do the unexpected and cut back.

Saquon Barkley has been the centerpiece of the Giants' offense all season. He is one of four players in the NFL to lead their teams in both rushing yards and receptions. His 533 yards rushing is second to Nick Chubb of Cleveland and his 676 yards from scrimmage leads the league. He has rushed for at least 100 yards twice and has had at least 100 yards from scrimmage in all but one game. The Ravens need to slow him down to win.

The Ravens return to the site of their season opener, where they beat the New York Jets 24-9. After that game — in which defensive back Kyle Fuller went down with a season-ending knee injury — Harbaugh said the field’s turf was “matted down” and that Fuller landed the wrong way on it.

Harbaugh didn’t want to make an issue of the playing surface again this week.

Baltimore isn’t as decimated by injuries as at the end of last season, but the Ravens were without receiver Rashod Bateman (foot) and running back Justice Hill (hamstring) last weekend.

Devin Duvernay has shown he can be a receiving and running threat in addition to an All-Pro return man, and running back J.K. Dobbins is back after missing all of last season with a knee injury. They’re capable of picking up the slack if Bateman and Hill aren’t back.

Safety Marcus Williams is out with a dislocated wrist.

Baltimore’s defense collapsed when the Ravens allowed four touchdowns in the fourth quarter of a 42-38 loss to Miami in Week 2. Since then, the secondary has looked better, and last week Baltimore kept Joe Burrow and Ja’Marr Chase in check in a 19-17 win over the Bengals.

Justin Tucker of the Ravens and Graham Gano of the Giants are two of the top kickers in the game. Tucker is tied for third in the league in scoring with 42 points, one more than Gano, who is tied for fifth.

Tucker, whose 43-yard kick won the game against Cincinnati with no time left, has made 61 consecutive field-goal attempts in the fourth quarter and overtime. He is 17 of 17 in the final minute of regulation in his career.

Gano has made 11 of 13 this season and all eight extra points. He is 4 for 4 from 50-plus yards. One of his missed field goals was blocked.