Ravens' Jackson enters another season with plenty to prove 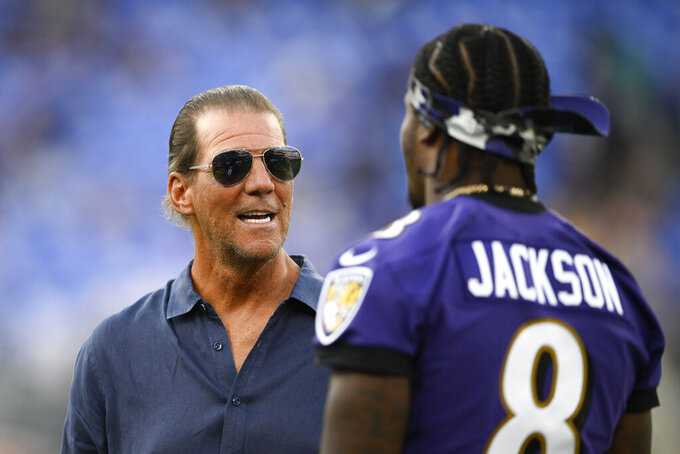 OWINGS MILLS, Md. (AP) — Even more than usual, this feels like a crucial season for Lamar Jackson.

The Baltimore Ravens' star quarterback has been both celebrated and doubted throughout his NFL career, whether he was winning MVP honors in 2019 or setting a career high in interceptions a season ago. After a late-season injury kept him out last year — and following an offseason full of contract uncertainty — Jackson will certainly be under a microscope in the months to come.

“I don’t know who this guy named ‘Anonymous’ is. I haven’t met him yet. So, I don’t even know why we report on what he has to say.”

That last comment was in reference to a piece in The Athletic last month in which Jackson was ranked below the No. 1 tier of quarterbacks. An anonymous defensive coordinator said in that story: “If he has to pass to win the game, they ain’t winning the game. ... I don’t (care) if he wins the league MVP 12 times, I don’t think he’ll ever be a 1 as a quarterback. He’ll be a 1 as a football player, but not as a quarterback.”

Jackson's style is so different from other quarterbacks — he rushed for more than 1,000 yards in back-to-back seasons, and he might have made it three in a row last year if not for his ankle problems down the stretch — that each season feels like a referendum not just on him, but on whether Baltimore's offensive approach can win a championship. Jackson has never come close to 4,000 yards passing in a season, but he's such a threat running the ball that the Ravens generally have been successful with him.

Last season was supposed to be the year Jackson would have a chance to prove himself as a passer after Baltimore tried to upgrade its receiving corps. And Jackson's arm was crucial in an early five-game winning streak that included a 442-yard passing effort in an overtime win over Indianapolis.

Neither he nor the Ravens could stay at that level, however, and he finished the season with 16 touchdown passes and 13 interceptions in 12 games. It would have been fascinating to see if Jackson could have adjusted late last season after he had problems dealing with the blitz — but his injury kept him out of the final four games. Baltimore dropped six in a row to finish 8-9.

Jackson is entering his fifth-year option season, and he came into training camp without a contract extension. It wasn't as big a problem as it could have been — he didn't hold out, and the Ravens can always use the franchise tag to keep him if they need to — but if he remains without a new deal, that will only add more drama to Baltimore's season.

Long before Jackson went down for good in December, the Ravens were decimated by injuries. Running backs J.K. Dobbins and Gus Edwards missed the whole 2021 season with knee injuries. So did cornerback Marcus Peters. Dobbins and Peters have been able to practice during training camp.

Tackle Ronnie Stanley barely played at all last season, and the offensive line had its share of issues in his absence.

Baltimore traded receiver Marquise Brown to Arizona for a first-round draft pick and didn't bring in any big names to replace him. That means Rashod Bateman, a first-round pick in 2021, will have a chance to play a bigger role. He too missed some time with injury issues last season, and Jackson came to rely increasingly on tight end Mark Andrews.

Tight end Isaiah Likely, a fourth-round pick this year, has shown a lot of potential during the preseason. He had eight catches for 100 yards in an exhibition game against Arizona.