Ravens' Judon says focus is on sacks, not contract extension 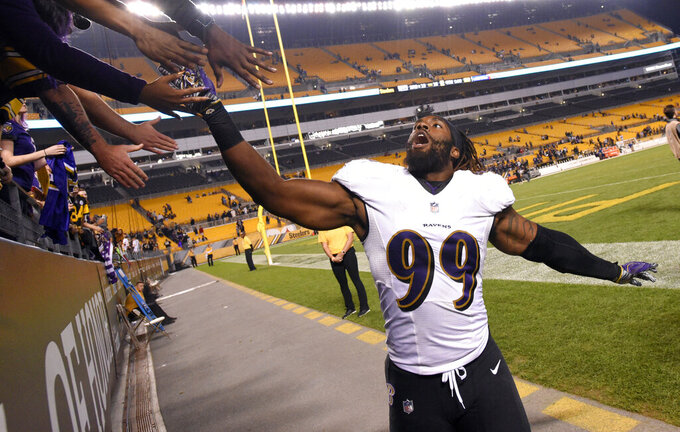 FILE - In this Sept. 30, 2018 file photo Baltimore Ravens linebacker Matt Judon celebrates with fans as he leaves the field after a 26-14 win over the Pittsburgh Steelers in an NFL football game in Pittsburgh. Judon is playing in the final year of his $2.59 million rookie deal, he says his focus is entirely on his performance. Next up for Judon and the Ravens is Cincinnati on Sunday, Oct. 13, 2019. (AP Photo/Don Wright, file)

He believes that would be unfair to his teammates.

Even though Judon is playing in the final year of his $2.59 million rookie deal, he said his focus is entirely on the next game.

"The better I play, the better our team plays, the more it helps me out with the contract," Judon said. "I am not really thinking about that. I have a job to do every day. How selfish would it be for me and to all these guys if I'm just out here pouting about some money?

"I am blessed to be here. So, I am just going to soak it up and take every advantage and opportunity I have to play hard and have fun with my guys."

The onus has been on Judon to fill the void left by the departure of the franchise's all-time sack leader, Terrell Suggs, and last season's top pass rusher, Za'Darius Smith, via free agency.

That seems like it is a lot of pressure for a fifth-round pick in 2016 from Grand Valley State, a Division II program in western Michigan.

So far, Judon has been up to the challenge. He is tied with fellow linebacker Pernell McPhee with a team-leading three sacks this season. Judon also ranks third on the Ravens with 19 tackles.

One of the areas Judon needs to improve is penalties.

Over the last 21 games, he has been flagged eight times. The penalties have included three for unnecessary roughness calls, one for roughing the passer and a horse-collar tackle in Week 3 against Kansas City, which helped extend a drive and led to a touchdown.

Both Suggs and Smith left for huge deals in Arizona and Green Bay, respectively. Linebacker C.J. Mosley had contract discussions with the Ravens, but opted to sign a 5-year, $85-million deal with the Jets this offseason.

At age 27, Judon will likely have plenty of suitors if the Ravens can't reach a new deal with him before free agency. As a result, Judon does not know what to expect as the clock ticks down on his current contract.

"I have no clue what the future holds," Judon said. "Hopefully, I'll be here forever and ever. But, like this offseason, we never know."

While Judon is all business on the field, he also provides levity in the locker room. In this year's team photo, Judon is pointing to the sky with a huge grin as the rest of his teammates stare forward into the camera.

"We put our head down, go to work, put our helmets back on, and we're always up for a challenge, up for a party," he said about the camaraderie in the Ravens locker room.

The Ravens have uncharacteristically given up some big plays this season. They are ranked 21st in overall defense and 29th against the pass.

Baltimore has also managed nine sacks over five games. Judon is looking to do more to support the injury-riddled secondary, starting this week against the Cincinnati Bengals.

"Some of the quarterbacks have been getting the ball out pretty fast," Judon said. "We've been up against some pretty good blocking schemes. When it really comes down to it, we have to win our 1-on-1s up front. We have to do a better job getting to the quarterback and applying pressure and helping our secondary out."