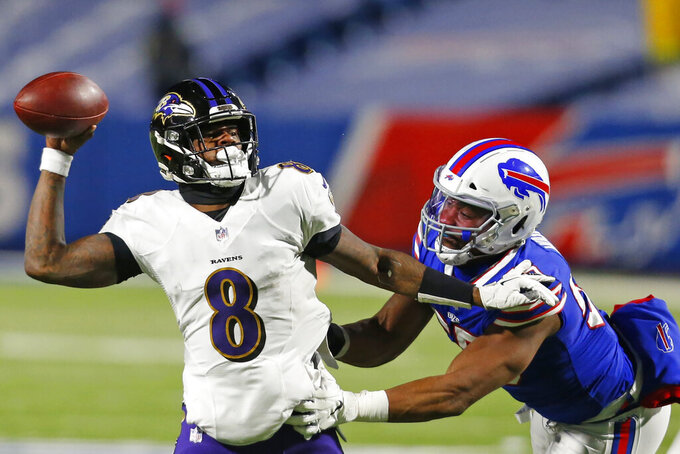 The Baltimore Ravens have got the running game down pat, as evidenced by their back-to-back seasons with more than 3,000 yards rushing.

The defense is sound, too. Baltimore allowed fewer than 19 points per game and limited the prolific Buffalo offense to a touchdown and a field goal in a second-round playoff loss last weekend.

So what's the priority this offseason? Quite simply, the Ravens need a robust passing game to supplement an offense that for the past three years has relied more heavily on quarterback Lamar Jackson's running ability than his downfield throws.

The Ravens finished ranked dead last in yards passing, but Harbaugh pointed out that Baltimore threw far fewer passes than any other team.

Moving forward, the plan is to bring a more balanced offense into the 2021 season. But it will remain a run-first unit built around Jackson, the only quarterback in NFL history with multiple 1,000-yard rushing seasons.

“It goes back to the same criticism that we've heard the last three years, about not being the type of offense or the type of quarterback that some people want to see," Harbaugh said. “They're just going to have to live with it, because Lamar Jackson's won a lot of football games here."

Baltimore is 30-7 in the regular season with Jackson as a starter, and the fleet-footed quarterback is the main reason why the Ravens set an NFL record with 3,296 yards rushing last year before rambling for 3,071 this season.

Problem is, opposing defenses are packing the line in an effort to force Jackson to throw, and he hasn't made them regret that strategy on a consistent basis.

So, although Baltimore has gone 10-6, 14-2 and 11-5 in the regular season over the past three years, it's the 1-3 record in the playoffs that's garnered most of the attention.

“Until you win the whole thing, you're really a failure in the playoffs," Harbaugh said.

There's no question that Jackson has the legs to carry the Ravens into the postseason. He's got a strong arm, too, but the 24-year-old still has much to do before approaching his peak at the position.

“He's a young player still and is going to continue to grow," Harbaugh said. “His skillset and talent is remarkable and unique. He's got a great arm and is a naturally gifted thrower."

What remains is for Jackson to enhance his footwork in the pocket, become more consistent with his mid-range throws and maintain his poise when no one's open downfield.

Example: With the Ravens in position for the tying touchdown in the third quarter against the Bills on Saturday night, Jackson threw an interception that was returned 101 yards for a touchdown — the key play in Baltimore's 17-3 defeat.

“He's going to work hard at that stuff and improve and get better and it will show up in how he plays next year," Harbaugh said.

Jackson is still playing on his rookie contract, but Harbaugh expects an extension will occur soon, perhaps this offseason.

“Of course, absolutely, we want Lamar to sign a long-term deal and be with us. I’m totally certain that that’s going to happen," the coach said. “When it happens, that’s the details and that’s what we’ve got to figure out.”

The Ravens could do Jackson a big favor by getting him another receiver to go with Marquise Brown, who was essentially the lone deep threat to go with possession receiver Willie Snead and reliable tight end Mark Andrews.

“It kind of comes down to who you can bring in here and what it will cost," Harbaugh said. “A big, physical receiver would be awesome for us. It could be another tight end or a speed guy that could open coverage up. We could use anybody that's talented and good."

Jackson was sacked three times against the Bills and missed the fourth quarter with a concussion. Harbaugh said the quarterback is on the mend, and the coach expects to have left tackle Ronnie Stanley (ankle) and tight end Nick Boyle (knee) back for training camp.