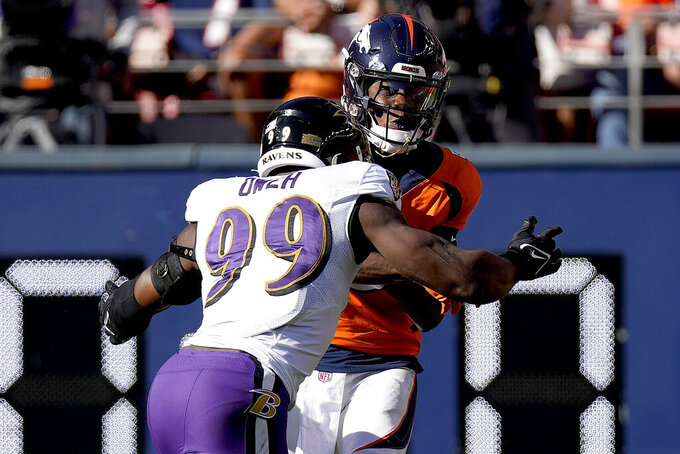 The Baltimore rookie had a sack in his very first NFL game. Then the following weekend, he forced a late fumble — and recovered it — to save the Ravens in a victory over Kansas City.

He had another sack last week in a win over Denver, and now the first-round draft pick from Penn State is setting his sights on the Ravens' next challenge, Monday night's game against Indianapolis.

“I think I’ve adjusted pretty well for a rookie," Oweh said. "Obviously, I can get better, in terms of reading everything and playing a little bit faster, but I feel like my athleticism helps me in a lot of spaces, where a lot of other rookies would struggle — stuff like that. But there’s always room for improvement, and I’m going to get better as the games go by.”

The Ravens had two first-round picks this year: Oweh and receiver Rashod Bateman. Baltimore is still waiting for Bateman to make his debut. He's been out with groin problems.

Oweh was brought in to help Baltimore's pass rush after the Ravens lost Matt Judon, Yannick Ngakoue and Jihad Ward to free agency. Oweh did not have a sack during Penn State's truncated 2020 season, but he had seven in his first two seasons with the Nittany Lions and already has a couple for Baltimore.

“I always just tell him to stay humble and continue to work,” Ravens linebacker Justin Houston said. "The sky is the limit for that kid.”

In Baltimore's win at Denver last week, Oweh knocked quarterback Teddy Bridgewater out of the game with a hit.

“It’s a hard-hitting game, but I had no ill intent on trying to knock him out of the game or try to make sure he wasn’t playing football for the rest of the game,” Oweh said. “There was no ill intent, but our mentality is basically to try to be the Ravens’ defense — bring physicality — and do everything that we’ve got to do safely, no penalties, and just try to play hard-hitting football.”

Pro Football Focus ranks Oweh 23rd in the NFL among edge defenders, one spot behind fellow rookie — and former Penn State teammate — Micah Parsons of the Dallas Cowboys. Also in that range at No. 28 is another rookie from the Big Ten, Kwity Paye of the Colts. Paye, a first-round pick out of Michigan, has been ruled out of this game against Oweh and the Ravens because of a hamstring injury.

Interestingly, Oweh's PFF ranking is much higher — fourth among edge defenders — against the run. He says it's important to him to be an every-down player.

“That’s my goal," he said. “Since freshman year, when they were trying to make me a pass-rush specialist, I hate that. I don’t like doing that. So, I try to make sure I’m good in every phase.”

Oweh has certainly had a chance to show off for a national audience. Baltimore's first two games this season were on a Monday night and a Sunday night, and now the Ravens are back on Monday night against the Colts.

Not that Oweh seems overly concerned with attention.

“I think he’s a humble kid, that’s just working hard and trying to get better every day, and I think that’s one of his best traits that he has," Ravens defensive coordinator Don Martindale said. "So, we’re looking forward to every Sunday, or in this case, Monday night, to see what comes next. But he’s done everything we’ve asked him to do, and he’s reaping rewards (for) executing defenses and pass rushes and everything else. It’s been awesome.”