Ravens preparation for 2019 began before exit from playoffs 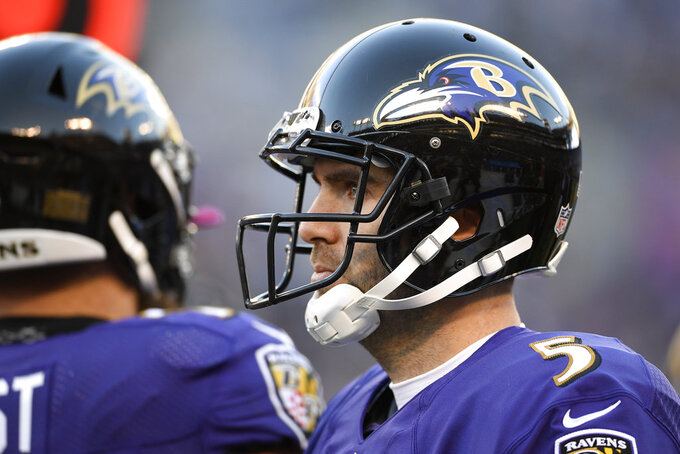 BALTIMORE (AP) — Long before they finished their season with a first-round playoff defeat, the Baltimore Ravens were already preparing for 2019 and beyond.

The process began last February, when owner Steve Bisciotti announced that this would be final year for general manager Ozzie Newsome, who has held the post since the franchise moved from Cleveland before the 1996 season. The job now belongs to Eric DeCosta, the assistant GM since 2012.

This also turned out to be the final season in Baltimore for quarterback Joe Flacco, whose 11-year run included three trips to the AFC Championship game and a Super Bowl MVP trophy.

Flacco was displaced in November by rookie Lamar Jackson , who guided the Ravens to the AFC North title and helped the team end a three-year hiatus from the playoffs.

And, if there was any question about the stability of coach John Harbaugh, that item was addressed last month when the team asserted he would return in 2019 and that both sides were working on an extension.

Not long after the Ravens (10-7) were eliminated Sunday with a 23-17 loss to the Los Angeles Chargers, Harbaugh was already looking toward next year.

"There are plenty of things that we can do to improve," he said. "We'll look at this as our beginning and go from here."

Flacco began his NFL career with the Ravens by reaching the playoffs in five consecutive years. The Ravens can only hope for a similar start from Jackson, who turned 22 Monday, one day after becoming the youngest quarterback in league history to start in the postseason.

The rookie had a flawed performance against the Chargers, fumbling three times of offset two touchdown passes during a failed fourth-quarter comeback bid. But Harbaugh and the Ravens are fully behind the fleet-footed Jackson, who didn't get his first NFL start until the 10th game of the season.

"Lamar is our quarterback going forward," Harbaugh said. "No question about that."

He left little doubt that Flacco won't be part of the equation in 2019.

"Joe's going to have a market. A lot of teams are going to want Joe," Harbaugh said.

The Ravens have their man.

"He's the future," safety Eric Weddle said. "He'll come back 10 times better than he was this year. For what he did, and to the belief that he gave not only our team, but our city, this organization, is pretty special."

Some other things to know about the Ravens as they begin the offseason:

Newsome will stick around as an adviser to DeCosta, who received the promotion because that was likely the only way for the Ravens keep him from going elsewhere.

"He has made the Ravens who they are, in my opinion," Harbaugh said of Newsome. "I'm biased, but I think he's the greatest GM in the history of football."

The transition should be smooth, because DeCosta has been part of the front office as long as the Ravens have been in existence.

Jackson fumbled at least once in each of his eight starts and had only one 200-yard passing game.

At least he knows what he must improve upon in 2019.

Flacco's hip injury in November opened the door for Jackson to start, and the rookie maintained the job after the team went on a hot streak.

The Ravens can't afford to pay Flacco to be a backup, so the veteran's postgame session with the media had a nostalgic feel.

"To be honest with you, I can't imagine a better 11 years," Flacco said. "This place becoming my home and my children's home. Just how many different life changes I went through and how much we won here."

Hall of Fame linebacker Ray Lewis played 17 years with the Ravens, and LB Terrell Suggs wants to at least match that number.

After completing his 16th season Sunday, the Ravens career sack leader offered no hint that retirement was in his future.

"I'm healthy, and I still feel like I have some juice in the tank," Suggs said. "I would love to be a Raven for life. It's a long time between here and March. So, we're just going to enjoy it and hope we can work it out. If not, I'll be lining up for somebody next year."

First-year defensive coordinator Don Martindale put together the league's No. 1 unit this year, restoring a tradition for a franchise that has long relied on stuffing the opposition.

No team allowed fewer yards, and only the Chicago Bears gave up fewer points per game. Baltimore limited the high-powered Chargers to one touchdown and 243 yards on Sunday.