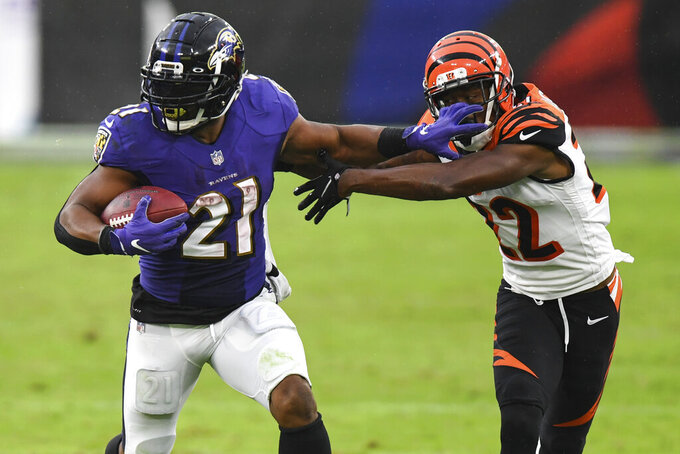 File-This Oct. 11, 2020, file photo shows Baltimore Ravens running back Mark Ingram (21) running the ball against Cincinnati Bengals cornerback William Jackson (22) during the second half of an NFL football game in Baltimore. The three-time Pro Bowl running back has been released by the Baltimore Ravens, who used the 10-year veteran as a starter for the first seven games this season before dropping him deep on the depth chart. (AP Photo/Terrance Williams, File)

Three-time Pro Bowl running back Mark Ingram has been released by the Baltimore Ravens, who used the 10-year veteran as a starter for the first seven games this season before dropping him deep on the depth chart.

The 31-year-old Ingram was on the inactive list for four of Baltimore's last five games, including playoff matchups against Tennessee and Buffalo. He finished with 299 yards on a career-low 72 carries and two touchdowns.

By the time Ingram sprained an ankle in a 30-28 win at Philadelphia on Oct. 18, the Ravens had already been providing most of the carries to Gus Edwards and rookie J.K. Dobbins. Ingram returned on Nov. 15 and received only 22 carries the rest of the way.

“I know Mark wants to be out there and he wants to be carrying the rock," coach John Harbaugh said on Dec. 21. “But he’s been great about it.”

Ingram's release was announced Tuesday, one day after he foreshadowed the move on Twitter.

“Thank you (owner) Mr. Steve Bisciotti and the Ravens for being a first class organization,” Ingram wrote. “... Best is ahead, can't wait!”

Ingram was signed by Baltimore as a free agent in March 2019 after playing eight years with the New Orleans Saints. He immediately assumed the role as a leader in the locker room and showed his worth on the field by running for 1,018 yards and 10 touchdowns. In addition, Ingram caught 26 passes for 247 yards and five TDs.

Ingram received his third Pro Bowl invitation during the 2019 season, his third with at 1,000 yards rushing. He has averaged a robust 4.6 yards per carry over this career.

On Monday, the Ravens released veteran backup quarterback Robert Griffin III, who served as backup to Lamar Jackson for three seasons. Griffin started for Jackson in Pittsburgh on Dec. 1, pulled a hamstring and finished the season on the injured reserve list.