Ravens seek 4th win in 5 when they visit inconsistent Saints 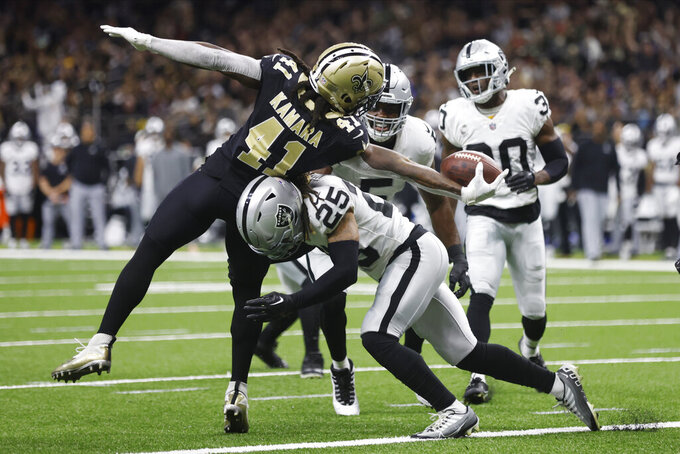 New Orleans Saints running back Alvin Kamara (41) stretches across the goal line for a touchdown against Las Vegas Raiders safety Tre'von Moehrig (25) during the first half of an NFL football game Sunday, Oct. 30, 2022, in New Orleans. (AP Photo/Rusty Costanza)

TURNOVER DIFFERENTIAL: Ravens plus-6; Saints minus-9.

RAVENS PLAYER TO WATCH: LB Roquan Smith. Baltimore’s big move at the trade deadline was to acquire Smith from Chicago. The NFL’s leader in tackles should be a strong addition to a defense that’s made strides of late.

KEY MATCHUP: Ravens dual-threat QB Lamar Jackson vs. the Saints defensive front led by end Cameron Jordan. The Saints defensive linemen combined for four sacks last week, but New Orleans has struggled against QBs who can run such as Arizona's Kyler Murray. Jackson has rushed for 553 yards and two TDs this season.

SERIES NOTES: The Ravens have won three of the past four including the previous time these teams met in the Superdome in 2014. The lone Saints victory during that span came when Justin Tucker missed a potential tying extra point kick.

STATS AND STUFF: The Ravens are 34-16 in prime time under John Harbaugh. ... Baltimore has led by double digits during every game so far this season. ... The Ravens have rushed for at least 150 yards in seven straight games. ... Baltimore LB Justin Houston has four sacks in the past two games. … The Ravens have forced at least one turnover in 10 straight games, the league’s longest active streak. … Baltimore QB Lamar Jackson has 12 TD passes and no interceptions in five “Monday Night Football” starts. ... Justin Tucker of the Ravens has made 63 consecutive FGs in the fourth quarter and overtime. ... Jackson needs 14 yards rushing to pass Steve Young for fifth on the career list for QBs. ... The Ravens have allowed 100 points in the first three quarters and 83 in the fourth. ... Baltimore has not had a pass play of more than 35 yards since Week 2 and has only five completions of 30 yards or more all season. The Ravens have had six runs of 30 yards or more. ... Saints QB Andy Dalton completed 22 of 30 (season-high 73.3%) for 229 yards and two TDs with no turnovers for a season-high 117.2 rating last week. ... The Saints have averaged 407.2 yards in five games with Dalton at QB. ... Dalton has 4,507 yards passing vs. Ravens, most vs. any Baltimore opponent. ... WR Chris Olave leads all rookies in catches (37) and yards receiving (547). ... LB Pete Werner led the Saints with 11 tackles in Week 8, his third game with at least 10 tackles this season. ... S Tyrann Mathieu had his second interception of season last week. When Mathieu was playing for Kansas City last season, he had two interceptions in a game against the Ravens and returned one 34 yards for a TD.

FANTASY TIP: Alvin Kamara has 100-plus scrimmage yards in each of his past four games. Last week he had 158 yards from scrimmage, nine receptions for 96 yards, and scored three TDs.