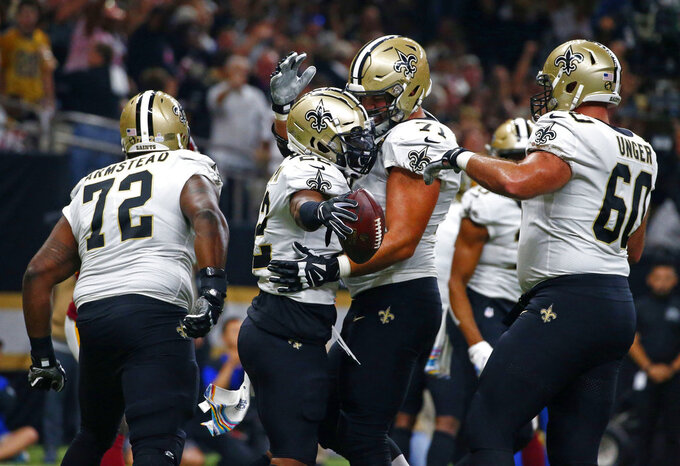 In this Oct. 8, 2018 file photo New Orleans Saints running back Mark Ingram, second left, celebrates his touchdown carry with offensive tackle Ryan Ramczyk, offensive tackle Terron Armstead (72) and center Max Unger (60) in the first half of an NFL football game against the Washington Redskins in New Orleans. The Saints have all five starters on their recently banged-up offensive line practicing as they prepare for their playoff opener against the defending champion Philadelphia Eagles on Sunday, Jan. 13, 2019. Terron Armstead says he was encouraged by his practice in more than two weeks. But he isn’t yet certain he’ll play as he tries to come back from a chest injury. (AP Photo/Butch Dill, file)

METAIRIE, La. (AP) — When Saints starting right guard Larry Warford came out of the trainer's room, he scooped a mini basketball off the floor of the locker room and casually executed a quick, spinning dribble around a teammate.

Combine that with left tackle Terron Armstead practicing for the first time in more than two weeks and versatile left guard Andrus Peat asserting that a recent hand injury wouldn't slow him down, and things are starting to look up for New Orleans' recently banged-up offensive line.

The Saints' playoff opener is this Sunday against the reigning Super Bowl champion Philadelphia Eagles. And if New Orleans is to advance, much could depend on how they protect quarterback Drew Brees and open lanes for running backs Alvin Kamara and Mark Ingram.

"They're the heart and soul, you know? Those guys set the tone," Brees said after practice Wednesday. "They set the tempo for every game. Obviously it begins and ends with them in everything we do as an offense."

New Orleans averaged 31.5 points and 379.2 yards per game this season, but just 19 points and 296.8 yards per game during their past five weeks — a stretch during which all five starting linemen missed at least part of a game.

Armstead, the Saints' second-highest paid offensive player after Brees, played in just part of one of those five games — a 31-28 victory over Pittsburgh in the Superdome that clinched the No. 1 playoff seed in the NFC for New Orleans. He's been trying to overcome a chest injury for about two months.

Peat, a 2015 first-round draft choice who might be New Orleans' most versatile lineman, missed part of the Saints' regular season finale after his injury.

Warford sat out the final game of the regular season with a sore knee.

Center Max Unger missed part of New Orleans' 12-9 victory over Carolina with a concussion in Week 15.

Starting right tackle Ryan Ramczyk briefly left the game against Pittsburgh after twisting his ankle, but came back after getting it re-taped.

Even Armstead's primary backup, veteran Jermon Bushrod, missed two of the past five games with a hamstring injury.

Yet, after capturing their conference's top playoff seed in Week 16, the Saints had the luxury of not only a first-round playoff bye, but also the option to rest players who needed more time to heal during the final week of the regular season.

Still, Armstead said it was difficult to know for sure how effective he'd be. NFL teams limit contact at practice, particularly at this time of year when health is at a premium.

"It's kind of hard to do and time's not really on my side. So I'm going, testing it as much as possible," Armstead said. "It's just hard to get actual game reps without being in a game. We go — for sure — but you're not trying to finish a guy or anything like that. And in a game it's crazy, man. There's certain movements that's sudden and positions that I would try to avoid if I possibly can."

Officially, Unger was the only starting offensive lineman not on the injury report Wednesday. Armstead, Peat, Ramczyk and Warford all were listed as limited. The Saints now say Ramczyk's shoulder is bothering him. Bushrod, too, was limited.

The Saints owned the line of scrimmage when they routed the Eagles 48-7 in mid-November. Eagles defensive tackle Fletcher Cox, who had 10½ sacks this season, had none against New Orleans and just two tackles.

"They blocked extremely well. They kept Drew clean and then of course the ability to run the football," Eagles coach Doug Pederson recalled.

"Sometimes you're not going to have all your starters or guys are going to be banged up, but you can see the attention to detail. They move well. They work as a unit. It's a good group. It's a good, solid group and it'll be a big challenge for our defensive line."

But coach Sean Payton cautioned that circumstances are different now.

"Obviously it's a different game. It seems like a year ago," Payton said. "There's some faces that are different — healthy, unhealthy."

Payton added that preventing the Eagles' defensive front from hurrying the quarterback presents "a tremendous challenge when you look at the personnel."