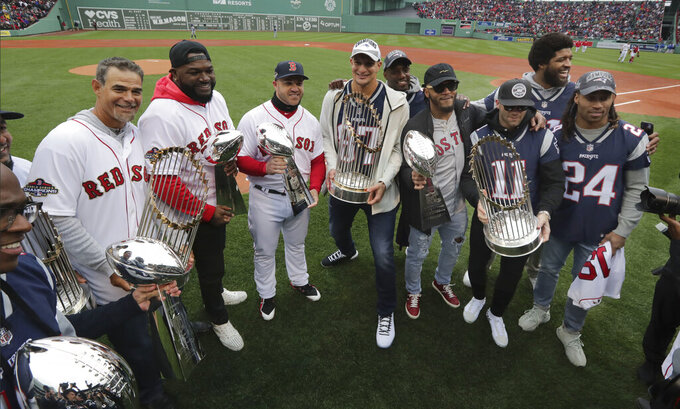 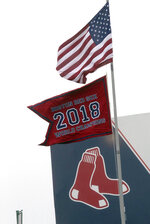 The New England Patriots brought their six Super Bowl trophies to Fenway Park on Tuesday to help the Boston Red Sox celebrate their latest World Series championship and unfurl a new banner in front of the Green Monster for the fourth time in 15 years.

"It's pretty cool to see all of them together," Red Sox utilityman Brock Holt said after the 7-5 loss to the Toronto Blue Jays in the home opener dropped Boston to 3-9 in its title defense.

"It's amazing to think about: We've won four, and the Patriots seem to win every year," he said. "Boston's a sports city, and a lot of people are pretty spoiled with the talent that's been here the last however many years."

Former Red Sox stars Pedro Martínez, David Ortiz and even the previously shunned Curt Schilling filed onto the field before the game in a ceremony to present the 2018 champs with their rings. Then Rob Gronkowski and Super Bowl MVP Julian Edelman led a couple dozen Patriots — carrying a half-dozen Lombardi Trophies — to the mound for the ceremonial first pitch.

All that shiny bling in one place helped warm the hearts of Red Sox fans who sat through the hourlong ceremony in 43-degree Fahrenheit temperatures (6.11 degrees Celsius) and pined for the defending champions to return home from the season-opening road trip that left them tied for last in the AL East.

The wait is over.

It has been more than three months since Boston last had a chance to pat itself on the back for a sports title, when the Patriots beat the Los Angeles Rams in the Super Bowl. That capped a run of 12 titles since 2001 — the Bruins and Celtics each won one — for a city that once considered itself cursed.

The ceremony was more subdued than the previous ones, especially the 2004 banner-raising that ended an 86-year title drought.

First the four World Series banners marking the Red Sox titles from the early 1900s were draped over the Green Monster. They were soon covered by four more from the 2000s that covered the whole wall.

Martínez, 2007 Series MVP Mike Lowell and '13 Series MVP Ortiz carried out the trophies. Then the 2018 team began filing down the red carpet to collect the championship rings near second base, where they were congratulated by ownership, team management and MLB Commissioner Rob Manfred.

Each ring includes 185 diamonds, rubies and sapphires totaling 15 carats. The inside has the player's signature and nickname, along with the Oct. 28 clinching date and the team's postseason slogan, "Damage Done."

Alex Cora led the coaching staff down the red carpet, out of the first base coaching box; David Price, who was the winning pitcher in Game 2 and again in the Game 5 finale against the Los Angeles Dodgers, was the first player to receive his ring.

Also receiving a loud ovation was second baseman Dustin Pedroia, who was activated from the injured list earlier Tuesday after missing most of last season with a knee injury.

Then the whole team filed out to center field to raise the 2018 pennant.

"I remember my first time, when I came here in 2000, everybody was talking about the curse. We never thought about the curse," said Manny Ramírez, the MVP of the drought-busting '04 Series. "We came, we won two, and now they won two more. It's awesome. When you see those trophies, then you realize it was worth it, coming here."