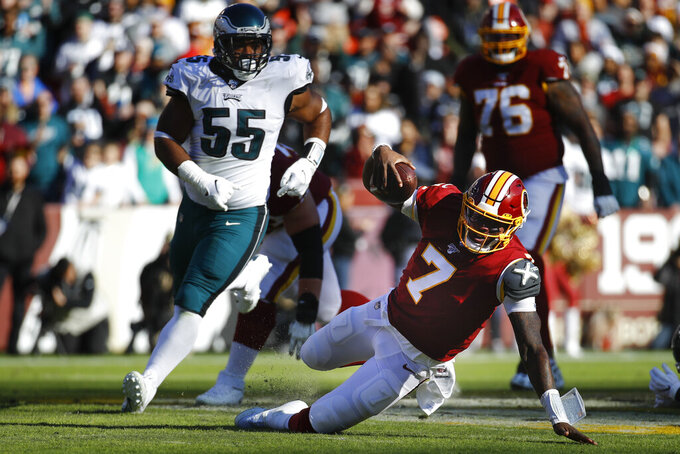 Washington Redskins quarterback Dwayne Haskins (7) looses his footing while running with the ball in the first half of an NFL football game against the Philadelphia Eagles, Sunday, Dec. 15, 2019, in Landover, Md. Giving chase is Philadelphia Eagles defensive end Brandon Graham (55). (AP Photo/Patrick Semansky)

LANDOVER, Md. (AP) — Dwayne Haskins and Terry McLaurin made some old college magic with their old college coach looking on.

Haskins connected with McLaurin on a 75-yard touchdown and four other completions in the Washington Redskins' 37-27 loss to the Philadelphia Eagles on Sunday. They did all that with former Ohio State coach Urban Meyer watching from owner Dan Snyder's box at FedEx Field.

“The spirits were there, for sure,” Haskins said after going 19 of 28 for 261 yards and two TD passes. “Me and Terry have a great relationship, and we know where we're going to be during the play. He does a good job getting open. He's a dynamic player we want to involve early in the offense, and I'm glad we did today.”

McLaurin made five catches for 130 yards and continued to show why Washington got a steal by drafting him in the third round. Haskins was the 15th overall pick, and the Redskins (3-11) could be fortunate enough to be in a spot to land Ohio State Heisman finalist pass rusher Chase Young at the top of the first round next year.

With all the Buckeyes talent already on the roster in Haskins and McLaurin, Meyer making an appearance in the owner's box was enough to at least raise some speculation about him becoming Washington's next coach. McLaurin didn't make that connection.

“It was good to see him, good to talk to him,” McLaurin said. “That passes football. It had nothing to do with his coaching status at all. It was good just having him support me again.”

Meyer sat with injured quarterback Alex Smith, who he coached at Utah, and is also linked to Redskins linebacker Jon Bostic and injured tight end Jordan Reed from his time at Florida. It remains to be seen if Meyer will even be a candidate for the Redskins job.

Whoever is in charge next season could see Sunday that there's a lot to work with offensively. Electrifying receiver Steven Sims can be a game-changer, and Haskins already has some strong chemistry with McLaurin.

“It helps me to have him and be around some other dynamic receivers and not having the offense really go through him,” Haskins said. “Now that he's the focal point of our receiving corps, I know he does a great job with owning his routes and being able to win vs. man, win vs. zone coverages. And he's someone that works hard every day.”

Haskins drew criticism earlier this year for not being ready yet for NFL action, but he's making significant progress. This wasn't necessarily a breakout game, but it was a further sign that he could be a franchise quarterback.

“I think he's doing a really good job of controlling the offense, tempo, making some plays if things break down he is eluding in the pocket,” McLaurin said. “I feel like he's showing some glimpse of it. If he can get hot and get in a rhythm, his confidence continues to go up when he makes those big throws and those big plays.

“I just told him to keep working, keep his head down and remain humble and things will turn around.”