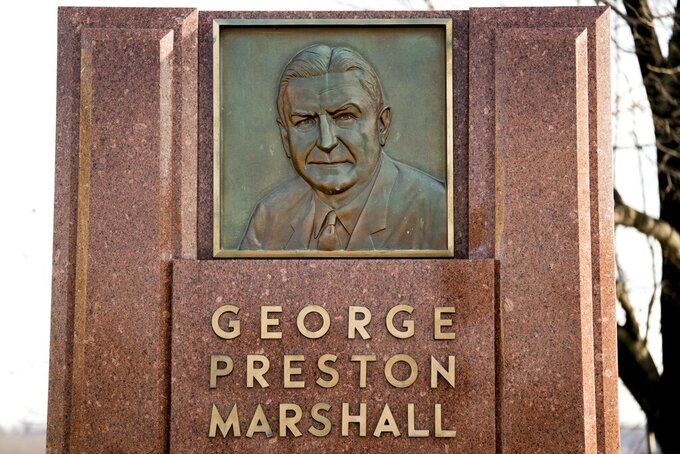 FILE - In this Dec. 14, 2017, file photo, the George Preston Marshall monument outside RFK stadium in Washington is shown. The Washington Redskins are removing former owner George Preston Marshall from their ring of fame and striking all references to him on their website, a spokesman confirmed Wednesday, June 24, 2020. It's the latest move made to cut ties with the legacy of the team's racist founder, who refused to integrate by signing Black players until “forced to do so” in 1962, more than a decade after the rest of the NFL. (AP Photo/Andrew Harnik, File)

The Washington Redskins are removing former owner George Preston Marshall from their Ring of Fame and striking all references to him on their website.

A spokesman confirmed the decisions Wednesday, saying Marshall's name has already been removed from the history wall at the team's training facility in Ashburn, Virginia. The spokesman said the Ring of Fame is removing Marshall's name from its stadium in Landover, Maryland, on Wednesday and the process to alter the website is underway.

"I don’t have any feelings against it," Marshall's granddaughter, Jordan Wright, told The Associated Press in a phone interview. “My sense has always been if anybody’s offended by these things, then that’s OK with me. They should take it down.”

It's the latest move to cut ties with the legacy of the team's racist founder, a segregationist who refused to integrate by signing Black players until forced to in 1962, more than a decade after much of the rest of the NFL.

Wright said she has tried for years to have the statue removed from the RFK Stadium grounds but wasn't notified when it happened last week.

“Although it was a big surprise, it wasn’t anything that I hadn’t already tried to put in motion,” she said.

Marshall owned the franchise from its inception in 1932 and moved the team from Boston to Washington several years later. He was inducted into the Pro Football Hall of Fame in 1963 and died in 1969.

“His contributions are well noted in many books and statistics, and his halftime shows and the rules of the game and things that he instituted, and he’s still in the Pro Football Hall of Fame in Canton,” Wright said. “That’s fine. That’s where it belongs — in history —and if they change it, OK. I don’t really care. I’m not offended.”

The Hall of Fame last week said nothing in its bylaws allows for a member's removal once elected, adding that enshrinement “is based on accomplishments on the field for players and coaches and, in the case of contributors, for growing and promoting the game.”

The recent national debate over racism has renewed calls for current owner Dan Snyder to change the team's name. A spokesman last week said the team had no comment, and the NFL did not respond to questions about the future of the name.

Wright said changing the name is something that “has to be done.” She's fine with Marshall's name being removed from the Ring of Fame in large part because she expects the team to move out of FedEx Field and into a new stadium in the near future.

With that could come a return to the District of Columbia and potentially a new moniker for the team Marshall named.

“It’s a new age,” Wright said. “It has been. But there have been a lot of people living in a bubble that, let’s just say, their consciousness hasn’t been raised, even though there’s every kind of evidence that it should be by now.”