Relieved Bucs: Wirfs' injury not as bad as initially feared 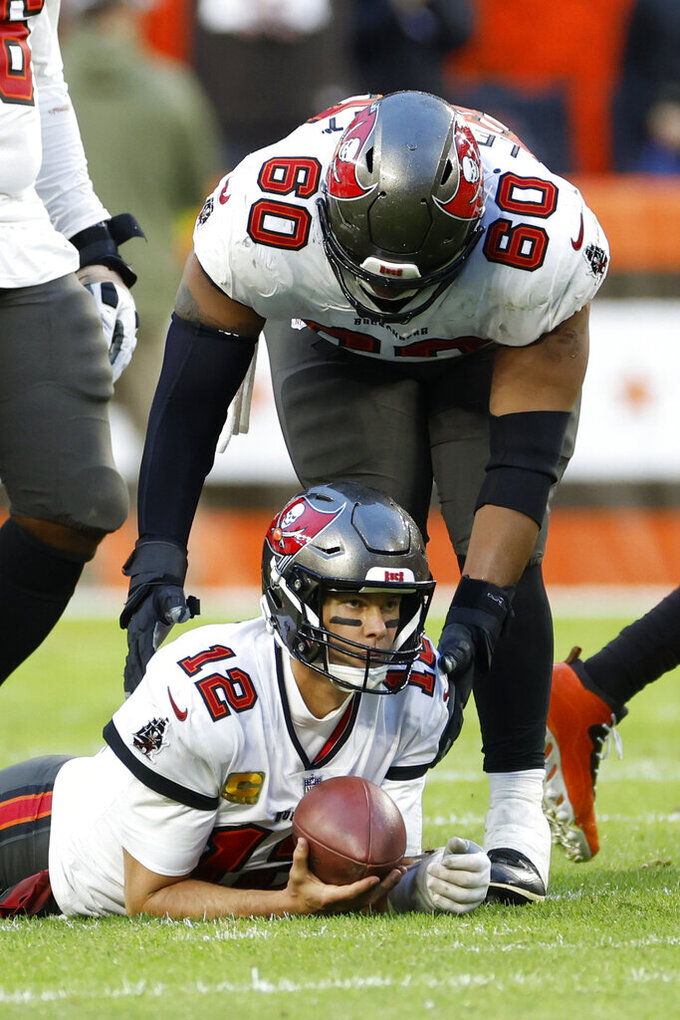 Tampa Bay Buccaneers quarterback Tom Brady (12) is helped up by Kaylon Geiger after being sacked during overtime of an NFL football game against the Cleveland Browns in Cleveland, Sunday, Nov. 27, 2022. Cleveland won in overtime 23-17. (AP Photo/Ron Schwane)

TAMPA, Fla. (AP) — The news coming out of another disappointing loss to an opponent with a losing record was not as bad as it could have been for the first-place Tampa Bay Buccaneers.

The Bucs (5-6) not only continue to hold a slim lead in the not-so-imposing NFC South, but an injury suffered by All-Pro offensive tackle Tristan Wirfs during an overtime loss to the Cleveland Browns is not as serious as the team initially feared.

“He’s got a high ankle sprain,” coach Todd Bowles said Monday, adding that while Wirfs is almost certain to sit out next Monday’s home game against New Orleans, the third-year pro could be in play to return at some point down the stretch.

“So we’ll see how it goes week to week," Bowles said.

The injury is the latest blow to an offensive line that has a drastically different look from the unit that protected Tom Brady the past two seasons.

With Wirfs out, the Bucs are down to one starter remaining from a year ago — left tackle Donovan Smith.

Sunday’s loss was Tampa Bay’s fourth to a team that’s currently three games or worse under .500, including the Browns (4-7).

In addition to struggling to getting the ball in the end zone, the Brady-led offense ranks last in the NFL in rushing. The Bucs took a 17-10 lead into the fourth quarter Sunday, but failed to score on their final seven possessions.

“Obviously, it’s a broken record at this point,” the coach added. “But as coaches and players that’s what you go back to. You go back to your fundamentals, and you play ball. That’s all it is.”

While unexpected changes and injuries have contributed to inconsistency on offense, Bowles declined to use injuries as an alibi for the team’s record.

“Last year, it was the defense. This year, it’s the offense. We’ve got to find ways to get it done,” Bowles said.

“We keep people on this team for a reason. They have to click,” he added. “They’re different type of players. I’m not saying they’re the same caliber. But they do some things well, and we’ve got to make sure we do the things they do well.”

WR Chris Godwin continues to makes strides in his return from knee surgery last winter. He was targeted 13 times on Sunday, finishing with 12 receptions for 110 yards and a touchdown.

Issues with the run defense persist. The Browns rushed for 189 yards, tied for the second most the Bucs have allowed in a game this season.

With RB Leonard Fournette inactive because of a hip injury, Rachaad White made his first pro start on the heels of rushing for a career-best 115 yards in a win over Seattle. The rookie had a 35-yard run and finished with 64 rushing on 14 attempts. White also had nine receptions for 45 yards.

On a day when WR Mike Evans joined Jerry Rice, Calvin Johnson, Marvin Harrison, Randy Moss and Larry Fitzgerald as the only players in NFL history with 10,000 yards receiving — along with 75-plus TD catches — in the first nine years of a career, Tampa Bay's No. 1 receiver was targeted nine times but had just two receptions. That has to change, Bowles said, if the Bucs are going to solve their offensive woes.

X-rays of Wirfs’ injury were negative. S Antoine Winfield Jr ( sprained ankle) also landed on the injury report, as did CB Sean Murphy-Bunting and S Mike Edwards, who were described as having “contusions” that will be evaluated as the week progresses.

Six. At 5-6, the Bucs have already surpassed their loss total for all of last season, when they went 14-5, including a home loss to the eventual Super Bowl champion Rams in the divisional round of the playoffs.

The Bucs lead the NFC South by a half game over Atlanta (5-7). They’ll try to get back to .500 when they host last-place New Orleans (4-8) next Monday night.