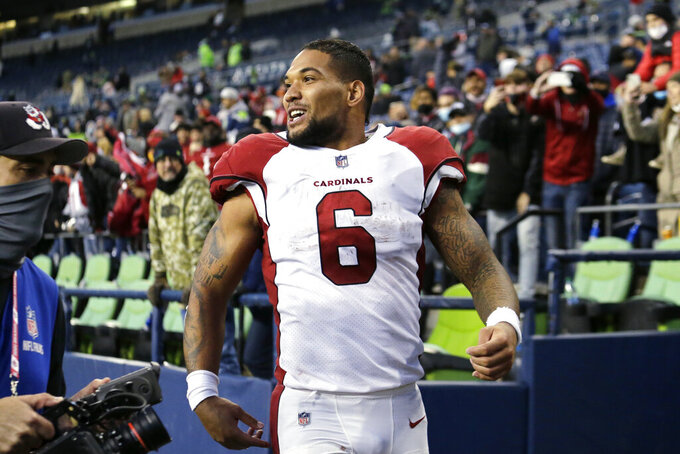 Arizona Cardinals' James Conner smiles as he heads off the field after his team defeated the Seattle Seahawks in an NFL football game, Sunday, Nov. 21, 2021, in Seattle. (AP Photo/John Froschauer)

For the second time in three games, the Cardinals earned a road win despite playing without starting quarterback Kyler Murray and star wide receiver DeAndre Hopkins as Colt McCoy led the way to a 23-13 victory over the Seattle Seahawks.

And now the Cardinals go into their bye week back on top of the latest AP Pro 32 poll.

The Cardinals received 11 of the 12 first-place votes for 383 points in balloting Tuesday by media members who regularly cover the NFL. They last were No. 1 in the poll after Week 9.

The Green Bay Packers slipped a spot No. 2 after losing 34-31 at the Minnesota Vikings on a field goal as time expired.

The Tampa Bay Buccaneers climbed three spots to No. 3 as they found their form with a 30-10 rout of the New York Giants on Monday night.

Another team that seems to have overcome recent struggles, the Kansas City Chiefs, jumped six spots to No. 4 as they head into their bye week. The Chiefs beat Dallas, which was previously ranked third.

The Tennessee Titans, who received the remaining first-place vote, dropped three places to No. 5 after a turnover-filled loss to the Houston Texans.

Much to the chagrin of many fans across the league, the New England Patriots are back in first place in the AFC East and playing their best as the season hits the second half. The Patriots gained two places to No. 6 and they host the Titans on Sunday in a game that could have a big impact on the playoff race in the AFC.

Baltimore moved up two places to No. 7 after rallying past the Chicago Bears 16-13. Similar to the Cardinals, the Ravens also relied on a backup QB to get a road win as Tyler Huntley led a last-minute five-play, 72-yard drive for the winning touchdown with Lamar Jackson ill.

Dallas fell five spots to No. 8 after losing to the Chiefs and will look to regain its winning ways when the Cowboys host Las Vegas on Thanksgiving Day.

The Los Angeles Rams slipped two spots to No. 9 despite being on a bye last week. The Rams will try to end their two-game slide as they head to Green Bay on Sunday.

“The Rams had a bye week to fix whatever is ailing their defense — and it had better be fixed by Sunday ... in what looms as a potential playoff-tiebreaker matchup. Los Angeles enters the game with a two-game losing streak and the NFL’s 12th-ranked defense.”