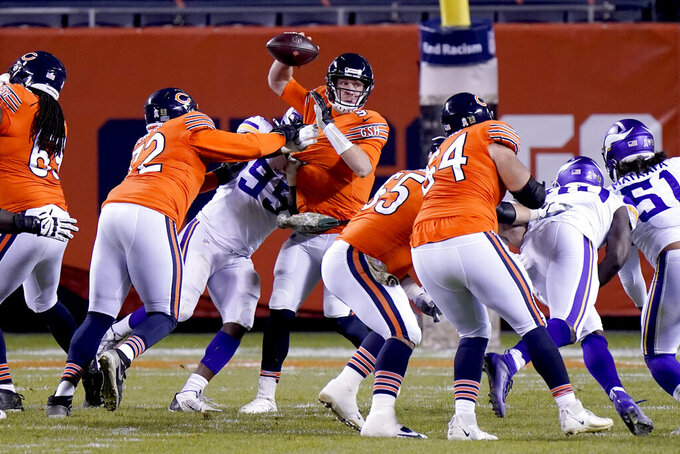 Chicago Bears quarterback Nick Foles is hit by Minnesota Vikings defensive end Ifeadi Odenigbo (95) during the second half of an NFL football game Monday, Nov. 16, 2020, in Chicago. Foles was injured on the play and left the game on a cart. (AP Photo/Nam Y. Huh) 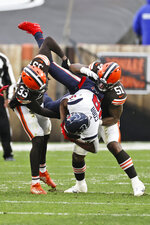 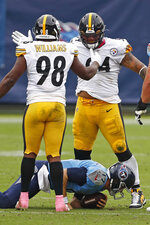 JACKSONVILLE, Fla. (AP) — The Jacksonville Jaguars are seeing former teammates nearly every week, so many down the stretch that it could be considered a Revenge Tour.

Next up: Pittsburgh defensive end Tyson Alualu, a first-round draft pick in 2010 who returns to Jacksonville on Sunday.

Alualu spent seven years with the Jaguars (1-8) after then-general manager Gene Smith surprisingly chose him with the 10th overall pick. Alualu’s productivity never matched his draft position, although his durability was another story.

The 6-foot-3, 300-pound Hawaiian didn’t miss a game because of injury during his time in Jacksonville; he was a healthy scratch for the first two weeks in 2016.

He’s been equally stout for the unbeaten Steelers (9-0).

“Man, I can’t say enough about Tyson. His play is really consistent and very productive,” Pittsburgh coach Mike Tomlin said. “Just his leadership, his quiet leadership, how he goes about his business, how he lives his life, is a shining example for young players.

“He’s been an awesome addition to us and really has been a significant component to why we’ve been able to play good defense. It was evident in recent weeks, particularly in run defense, when we did not have him.”

But don’t expect Alualu to make much of facing the team that let him go in 2017, after paying him more than $28 million.

“That’s not his agenda. He’s not petty in any way,” Tomlin said.

Others might be. Jacksonville will face seven more former Jaguars over its next five games:

Harrison returns to Jacksonville on Nov. 29. The Jaguars traded the 2018 third-round pick to Cleveland a little more than a week before the opener, parting ways because veteran Josh Jones beat Harrison out in training camp. The Browns gave up a fifth-rounder in 2021 to land Harrison, who has started four straight games and totaled 27 tackles and five pass breakups.

Ngakoue was initially scheduled to face Jacksonville in Minnesota on Dec. 6, but he will have to wait two weeks after getting traded to Baltimore. The Jaguars got a second-rounder and a conditional fifth for Ngakoue, who is second in franchise history with 37½ sacks. He has ripped Jacksonville repeatedly, including getting in a Twitter spat with minority owner Tony Khan in April.

The “Mayor of Sacksonville” was dumped as part of a salary cap purge in March. Baltimore gave up a fifth-round selection to get a veteran leader — the NFL’s reigning Walter Payton Man of the Year — and a defensive stalwart who started every game in three seasons with the Jags. Campbell has 24 tackles, including four sacks, and six pass breakups for one of the league’s best defenses.

Foles also was part of the salary dump and will return to Jacksonville in Week 16. Chicago gave up a compensatory fourth to get Foles, who started the past seven games for the Bears. The trade allowed Jacksonville to recoup some of the $50.125 million it guaranteed the 2018 Super Bowl MVP as part of a four-year contract in 2019.

DeFilippo and Foles were a package deal. Jaguars coach Doug Marrone brought “Flip” on as offensive coordinator two months before free agency, likely to help lure Foles in free agency. When Foles failed, Marrone fired DeFilippo after just one season. He landed in Chicago as quarterbacks coach, reuniting with Foles.

Gipson was an integral part of Jacksonville’s defense that led it to the AFC championship game in 2018. He was sent packing a year later, a cost-cutting move that helped create enough salary cap space to sign Foles. He has started every game for the Bears this season.

Robinson is, without question, the best receiver Jacksonville has drafted. The Jaguars let the 2014 second-round pick leave in free agency after he missed most of 2017 with a knee injury. They’ve spent nearly $32 million trying to replace him with Marqise Lee, Donte Moncrief and Chris Conley.

“It’s funny because those are people I talk to almost every day, every other day, weekly,” Jaguars receiver Keelan Cole said. “We talk about it, but I didn’t really think of it. I guess I am playing my old teammates coming back. I’m definitely excited for that, but we can’t jersey swap, so that (stinks).”