The right Fitz: Steelers' Fitzpatrick looks to build on 2020 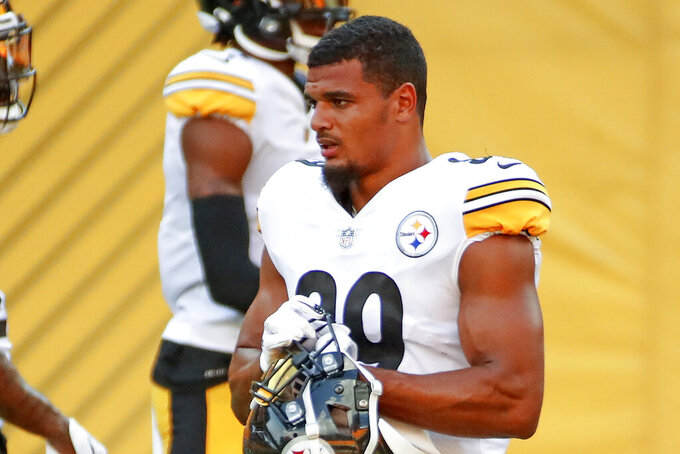 PITTSBURGH (AP) — Minkah Fitzpatrick is just fine with how 2019 turned out, thanks for asking.

So forgive the Pittsburgh Steelers safety for not demanding the team change how it uses him in his second season patrolling the back end of the secondary.

“I was happy with Pro Bowl, All-Pro,” Fitzpatrick said Monday.

So were the Steelers, who audaciously sent a 2020 first-round pick to Miami a couple of days after losing quarterback Ben Roethlisberger for the season to secure the dynamic Fitzpatrick.

The 23-year-old repaid the gamble by becoming the missing piece on a defense that single-handedly kept Pittsburgh in the playoff hunt until the final weeks. His five interceptions tied for the team lead and his two touchdowns — one a 96-yard pick-six against Indianapolis, the other a 43-yard fumble return against the Los Angeles Rams — tilted momentum into the Steelers' favor in games they would win by a combined seven points.

In between were all the little things that don't always show up on film but provided ample evidence the team may have found its heir apparent to Hall of Fame inductee Troy Polamalu, who retired in 2015. The heady Fitzpatrick rarely found himself out of position and his ability to be around the ball is one of the reasons the Steelers led the NFL with 38 takeaways.

Yet Fitzpatrick's versatility can be tempting. He has the cover skills to work in the slot. He has the physicality to serve as a linebacker of sorts in a dime package. He has the speed to work on the outside. And he has the intelligence to handle a myriad of roles without missing a step.

So while Fitzpatrick insists he's fine with refining what he worked on last fall — and coach Mike Tomlin practically rolled his eyes at the idea Fitzpatrick's No. 39 could turn into a black-and-gold version of “Where's Waldo?” — senior defensive assistant Teryl Austin admitted they might tinker with Fitzpatrick simply because they can.

“Getting him Week 3 like we did last year, you were just trying to throw him in and just trying to get him lined up and all that other stuff,” Austin said.

“But I think this offseason has been helpful for us and for him and for the group. We have been able to talk some things out and really get down into the details of our defense and I think that will give him a little bit more ability to show up in a couple different positions than he was last year.”

Pittsburgh might have to if it wants Fitzpatrick to replicate the impact he made in 2019. Teams began scheming away from him near the end of last season, a sign of respect to Fitzpatrick's immense skillset.

“When you are a good player, a lot of times you don’t get all that action,” Austin said.

Yet for all the accolades — including a trip to Orlando for the Pro Bowl and a spot in the annual NFL Top 100 player poll — Fitzpatrick insists there's room for improvement. He spent a portion of the virtual offseason focusing on his posture while in coverage.

Too often last season he would find himself too upright coming out of breaks, giving receivers a fraction of an advantage. So he worked on staying lower, which will allow him to explode when he changes direction.

He and Tomlin went back and forth about Fitzpatrick's approach to tackling, the aspect of his game he understands needs to be above reproach as often the last person standing between an opposing player and the end zone.

“(You're) not going to let things fly over your head or let balls, running backs slip out of the backfield and make big plays,” Fitzpatrick said. “Also, be aggressive. You're just not going to let everybody catch everything in front of you.”

“It makes it a little more challenging,” Washington said. “He is a smart player and his attributes are one of the best. You definitely have to be cognizant of where he is at in the middle of the field when you are running your routes.”

Fitzpatrick quickly won over his teammates with his work ethic. Now, the player who did his best to just fit while “hopping on a moving train” as Tomlin likes to put it, is fine with taking a more vocal approach this time around.

Quarterback Ben Roethlisberger's return, coupled with a top-five defense that returns all but one starter, means the stakes are high. That's just the way Fitzpatrick likes it.

“If we can still play to that same tempo and create the amount of turnovers and sacks and stuff that we did,” Fitzpatrick said, “I think we are going to be a great team.”