Rivera: Panthers may work out kickers after Slye’s struggles 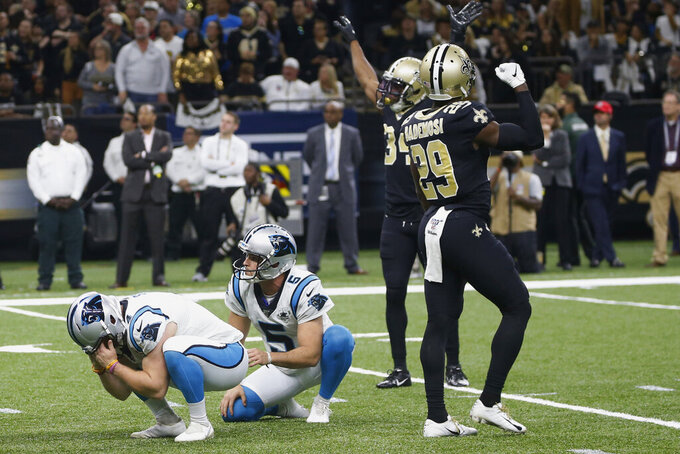 CHARLOTTE, N.C. (AP) — Joey Slye has been put on notice in Carolina.

Panthers coach Ron Rivera said the team is considering bringing in other kickers this week for tryouts after Slye missed two extra points and a go-ahead 28-yard field goal with 1:56 remaining in a 34-31 loss to the division-leading New Orleans Saints.

In the meantime the Panthers signed kicker Greg Joseph to the practice squad on Monday.

After Slye’s miss, he squatted like a catcher and cupped his facemask in his hands, knowing he had likely cost his team the game. Sure enough, Drew Brees drove the Saints into scoring position to set up Wil Lutz’s winning kick as time expired.

“Those are things that we are certainly going to discuss,” Rivera said of bringing in a replacement kicker. “It’s about doing your job and Joey is well aware of that. It’s something that we’re going to talk about.”

Slye started the season like gangbusters, making 10 of his first 11 kicks — including five from beyond 50 yards — to earn NFC special teams player of the month honors. But he’s struggled since, making 9 of 15 field goals while missing four extra points.

The loss Sunday was crushing, and it has all but eliminated the Panthers from serious playoff contention. With five games remaining Carolina is four games behind the Saints in the NFC South, and three games behind Minnesota in the race for the second wild-card spot.

Carolina was forced to go with Slye this season after placing veteran kicker Graham Gano on injured reserve with a knee issue earlier. Slye said after the game he felt horrible because he let his teammates down.

Quarterback Kyle Allen put his arm around Slye after the game and tried to console him.

“I told him I was in the exact same spot he was last week,” Allen said. “I told him, ‘We’re going to need you down the line.’ Throwing four picks last week, I didn’t give us a chance to win the game at all. I told him, ‘Look man, it’s going to happen, especially in a kicker’s career. You see it from every kicker. People go through slumps sometimes.’ ”

Christian McCaffrey continues to be the focal point of the offense and the team’s go-to-guy. He had 133 yards from scrimmage — about 25 yards below his season average — and scored his league-leading 16th touchdown on a reception as he continues to eye a 1,000-yard rushing and receiving season. Only two other NFL players have accomplished that, Roger Craig and Marshall Faulk. The only real concern for McCaffrey is whether the team is using him too much and if he will wind up wearing down in a few years.

The Panthers have been rotating offensive tackles and nothing really seems to be working well. On Sunday, rookie Greg Little had a huge blunder when he allowed a sack when the Panthers were tied at 31 and driving for a potential go-ahead touchdown. They wound up settling for a field goal, which Slye missed.

Second-year wide receiver D.J. Moore has had an electrifying November with 30 receptions for 442 yards and two touchdowns over the last four weeks. Moore had six catches for 126 yards against the Saints and two scores, doubling his output in that category this season. He now has three 100-yard receiving games in the past four weeks. He had 95 yards in the other game.

The Panthers waived 2018 third-round choice Rashaan Gaulden on Monday, ending a disappointing stint in Carolina. Gaulden was cut loose after he ran into his own punt returner during Sunday’s game, resulting in a turnover. Gaulden’s stock had fallen long ago when the team brought in Tre Boston to start the season at safety.

Rivera said DT Dontari Poe (knee) and OG Greg Van Roten (toe) suffered injuries that he viewed as concerning, and both are scheduled to have MRIs. Poe was carted off the field, unable to put pressure on his leg. On the flip side, Rivera said outside linebacker Brian Burns’ hand is no longer an issue.

112.7 — QB rating for second-year QB Kyle Allen, who was 23 of 36 for 256 yards with three touchdowns against the Saints in a fine bounce-back performance.

The Panthers (5-6) are all but out of the playoff hunt with five games remaining but have a good chance to get back to .500 with a win Sunday against former Carolina cornerback Josh Norman and the Redskins (2-9).