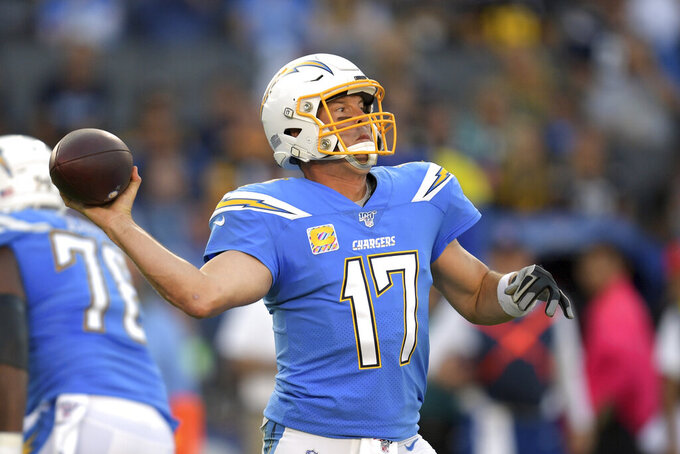 With the Chargers having dropped two straight and four of five, Rivers' decision-making in big moments is one reason why they are one of six teams in the AFC with a 2-4 record.

Rivers committed three turnovers in Sunday's 24-17 loss to Pittsburgh, with two resulting in Steelers touchdowns. He has eight turnovers through six games after having 13 last year.

"I don't like the turnovers. I do believe they are going to stop," coach Anthony Lynn said Monday. "He may be pressing a little bit early. We have to get back to him taking care of the football."

The Chargers have trailed by two touchdowns at the end of the first quarter the past two weeks and were blanked in the first half in consecutive home games for the first time in 43 years. If Rivers is feeling pressure to carry the team, there are reasons for that. He is playing behind an inexperienced offensive line that is missing its two veteran leaders — left tackle Russell Okung and center Mike Pouncey — and the running game has regressed despite the return of Melvin Gordon.

Gordon and Rivers gift-wrapped the Steelers their first touchdown when Rivers threw a backward pass too high that Gordon was unable to grab. Gordon thought the play was over and watched Devin Bush scoop up the loose ball and run 9 yards for the score.

Rivers threw for 320 yards against the Steelers, but 139 came in the fourth quarter when the Chargers trailed 24-0 and Pittsburgh was playing soft coverage.

"When you turn it over twice and you get beat, and you only score what we're scoring, you look for lots of things. Ultimately, we have to find a way to get in the end zone more," Rivers said. "To me, that's the biggest issue right now that we're having, offensively. The offense's job is to score one more point than the other team and we're not doing that."

The only way the Chargers were able to move the ball consistently was via the intermediate passing game (routes of 10 to 20 yards). Rivers was 13 of 17 for 192 yards on those routes, his most completions on medium throws since he had 11 against San Francisco in 2014.

Mike Williams had his second straight solid game with five receptions for 72 yards. He is averaging 13.3 yards per catch the past two weeks.

Tackling. Last week it was safety Rayshawn Jenkins who was unable to make an open-field tackle that led to a touchdown. This week it was linebacker Jatavis Brown.

Brown couldn't wrap up Steelers running back James Conner and limit him to a 1-yard gain. Instead, Conner slipped out of a high tackle attempt and went 25 yards up the right sideline to put Pittsburgh up by three touchdowns.

Hunter Henry set career highs in receptions (eight) and yards (100) after missing the past four games because of a knee injury. The fourth-year tight end, who has been one of Rivers' more dependable targets, also had his first multi-touchdown game. He had a 19-yard reception on the first play of the game and then made a nice catch in the back of the end zone for the Chargers' first touchdown.

"His production really was unbelievable in his first game back. He probably played more plays than probably everybody anticipated, but it was the way the game went," Rivers said. "He's probably just going to be used more on third downs and a few other things, but when you get behind like we were, we had to roll."

Gordon has only 49 yards on 20 carries in his two games since returning from a two-month holdout. He continues to look tentative after getting the ball and is not generating many yards after contact.

The Chargers for once were able to get out of a game without any new significant injuries. Defensive end Melvin Ingram missed his second straight game because of a hamstring but there is a possibility he could return this week.

Okung is eligible to come off the non-football injury list this week, but Lynn said he wouldn't have an update on the left tackle until Wednesday.

49.3% — Third-down conversion rate against the Chargers' defense, which is fourth-worst in the league. Pittsburgh came into the game converting only 28.3% of its third downs but was 8 of 13 on Sunday night, succeeding on all seven with 4 yards or fewer to go.

The Chargers are on the road for three of their next four, beginning Sunday against Tennessee. Los Angeles has won six of its past seven over the Titans, including 20-19 last season in London.