Rodgers, Packers try to show they still own struggling Bears 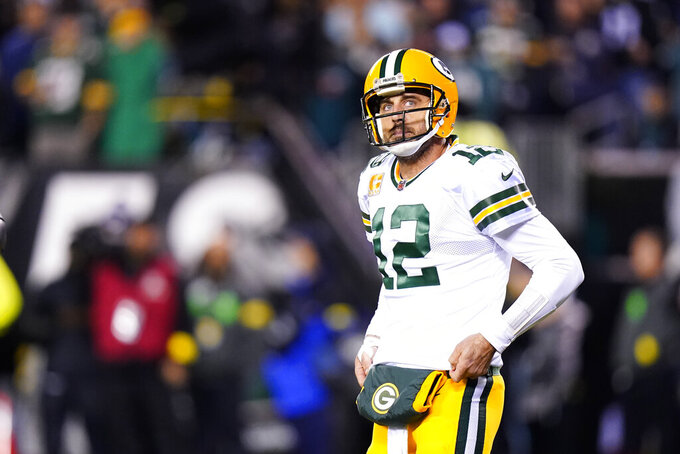 Green Bay Packers quarterback Aaron Rodgers looks are a replay during the first half of an NFL football game against the Philadelphia Eagle, Sunday, Nov. 27, 2022, in Philadelphia. (AP Photo/Chris Szagola)

PACKERS PLAYER TO WATCH: QB Aaron Rodgers. The four-time MVP has dominated the Bears to the tune of a 24-5 record counting the playoffs. He has been particularly good in his past five games against Chicago, completing 75.9% of his passes for 1,221 yards with 16 touchdowns and no interceptions.

BEARS PLAYER TO WATCH: RB David Montgomery. The Bears were able to run the ball last week even without injured QB Justin Fields (separated left shoulder) and RB Khalil Herbert (hip). They ran for 127 yards on 29 attempts, with Montgomery finishing with 79 yards on 14 carries. Montgomery has performed well in six career games against Green Bay, running for 393 yards and averaging 5 per attempt. He had a season-high 122 yards in Week 2 at Lambeau Field.

KEY MATCHUP: WR Christian Watson vs. CB Jaylon Johnson. Watson caught four passes for 110 yards and a touchdown last week. He has 12 catches and six TD receptions over the past three games. Watson is the first Packers rookie to catch a touchdown in three straight games since Billy Howton in 1952.

KEY INJURIES: It looks as though the Bears will have QB Justin Fields back after he missed last week’s game at the New York Jets because of a separated left shoulder. Fields was a full participant in practice Friday for the second straight day and was listed without a designation on the team’s final injury report. ... Herbert, who's on injured reserve, has missed the past two games for Chicago. ... Backup QB Trevor Siemian (oblique) is set to have season-ending surgery. He played last week after he was hurt in warmups. ... S Eddie Jackson (foot) and WR Darnell Mooney (ankle) suffered season-ending injuries last week. ... S Jaquan Brisker (concussion) and CB Kyler Gordon (concussion) were ruled out. ... S Dane Cruikshank (hamstring) was placed on IR on Wednesday. ... RTs Riley Reiff (back) and Larry Borom (ankle, knee) are banged up. ... Rodgers says he plans to play for the Packers on Sunday after leaving the Eagles game with injured ribs. He has played the Packers' last seven games with a broken right thumb. ... LB De'Vondre Campbell (knee) has missed four straight games and WR Romeo Doubs (ankle) has been out three straight games, but both practiced on a limited basis this week and were listed as questionable. ... S Darnell Savage left the Eagles game with a foot injury and was doubtful. ... OT David Bakhtiari (knee/illness) was ruled out after the team announced he underwent an appendectomy.

SERIES NOTES: The NFL's oldest rivalry has been one-sided in recent years, with the Packers winning seven in a row. Matt LaFleur is the only coach to win his first seven regular-season games against Chicago.

STATS AND STUFF: Green Bay’s 4-8 record is its worst mark through the first 12 games of a season since 2006, when the Packers started out 4-8 before closing with four straight wins to finish 8-8. … The Packers and Bears enter Sunday’s game tied for the NFL lead with 786 regular-season wins. … Green Bay allowed 363 yards rushing by Philadelphia, the most the Packers had allowed in a game since 1977. … Packers RB Aaron Jones has 4,984 yards rushing, 40 shy of John Brockington for third place on the Packers’ career list. Green Bay’s top two are Ahman Green (8,322) and Jim Taylor (8,207). … Packers DB/KR Keisean Nixon had two kickoff returns of 50-plus yards against Philadelphia. He was the first NFL player to have two kickoff returns of 50-plus yards in a game since New York Jets WR Andre Roberts did it against the Packers on Dec. 23, 2018. ... The Bears have lost at least five straight for the third consecutive season. They dropped six in a row in 2020 and five in 2021 and five this season entering Sunday. ... Fields leads all quarterbacks and ranks seventh overall with 834 yards rushing. At 6.8 yards per carry, he is second in the NFL. ... Chicago and Las Vegas are tied for a league low with 16 sacks. Brisker leads the Bears with three. ... Cole Kmet is tied for second among TEs with a career-high five touchdown catches.

FANTASY TIP: Rodgers might be banged up, with a rib injury knocking him out of last week's game and a broken thumb limiting him since early October. But he still owns the Bears, as he shouted to fans at Soldier Field last year.