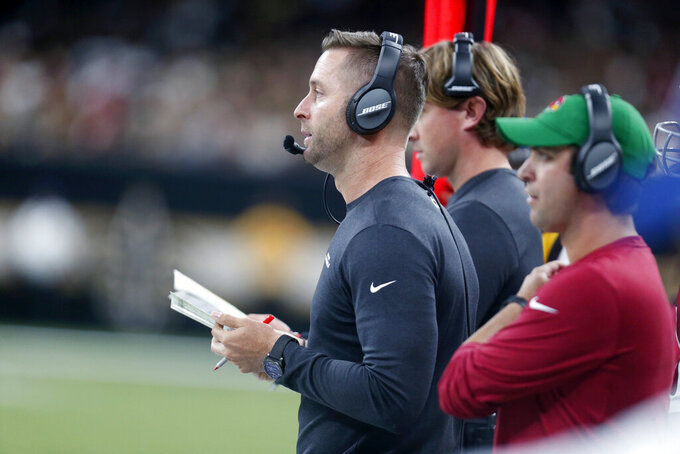 Arizona Cardinals head coach Kliff Kingsbury watches for the sideline in the first half of an NFL football game against the New Orleans Saints in New Orleans, Sunday, Oct. 27, 2019. (AP Photo/Butch Dill)

The nine-year veteran broke into the NFL back in 2011 with Arizona and during his early years, the games against division rival San Francisco were always a difficult task. The Niners won 36 regular-season games from 2011-13 and made the Super Bowl in the 2012 season.

"To me, it resembles that same style of football," Peterson said. "Building that team up front on both sides of the ball, taking their shots when they can and playing great defense. They have their personnel and they're playing some real good football."

San Francisco (7-0) travels to face Arizona (3-4-1) on Thursday night and enters the game on quite a roll. The 49ers crushed the Carolina Panthers 51-13 on Sunday and have been plowing through their schedule with one of the league's best defenses.

Arizona is coming off a 31-9 loss to the New Orleans Saints on Sunday. That dud ended a three-game winning streak for the Cardinals, who knocked off the Bengals, Falcons and Giants in consecutive weeks before the setback in New Orleans.

Cardinals rookie quarterback Kyler Murray said that after Sunday's poor performance, the team is eager to get back on the field, especially at home.

"That should be fun. Wearing all black, Thursday night, real first prime-time game for us," Murray said. "Just really trying to go out there and put on a show and protect home."

The Niners took a different approach this week with a Thursday game. The coaches slept at the facility to get as much work on the game plan done as possible. For the players, sleep was the priority. San Francisco didn't practice Monday and then had a walkthrough on Tuesday under the stadium lights rather than the usual afternoon practice.

"I feel like sleep is so important on these quick turnarounds, so we wanted the guys to sleep in a little bit more than usual," coach Kyle Shanahan said.

Then the team planned a quick practice Wednesday before flying to Arizona.

Arizona's three-game winning streak was built on a balanced offense, with the team leaning on the running back duo of David Johnson and Chase Edmonds.

Now both players are injured and the Cardinals have had to adjust in a hurry.

With Edmonds (hamstring) out and Johnson (ankle) questionable for Thursday's game, the Cardinals traded for Kenyan Drake on Monday, giving up a conditional sixth-round pick in 2020.

The 25-year-old Drake joins Alfred Morris and Zach Zenner, who were signed last week because of injuries, in the running back rotation. He'll have to learn the offense in less than 72 hours to have an impact.

"It's actually funny — the longest-tenured running back here who is healthy has been here in six days," Drake said. "We've all got a learning curve, but we're helping each other out."

This marks the first of what should be several meetings between the top two picks in the 2019 draft. Both teams are pleased with their choices with Murray off to a solid start in Arizona after being picked first and defensive end Nick Bosa dominating in San Francisco as the second pick. Bosa became the third rookie to get three sacks and an interception in a game last week against Carolina and now gets a tougher test chasing down the mobile Murray.

"I try to keep my eyes on my work, which is the offensive lineman, which helps me beat offensive linemen," Bosa said. "But with a quarterback like this, you have to have eyes on the backfield and you have to know what his tendencies are when it comes to escaping so you can counter it."

Arizona has had no turnovers over the past four games, which is tied for the longest streak in franchise history.

The ball security is remarkable considering the Cardinals are playing with a rookie quarterback and several young players at other skill positions. Murray has thrown four interceptions this year and the Cardinals haven't lost a fumble.

The four turnovers through eight games are the fewest in the NFL.

San Francisco cornerback Richard Sherman and Arizona receiver Larry Fitzgerald have had plenty of meetings over the years as NFC West rivals. The two have faced off 14 times since Sherman entered the league with Seattle in 2011 and are often matched up against each other. Fitzgerald has 77 catches for 882 yards and three TDs in those games and the two have formed a close relationship over that time.

"I appreciate going against him the most," Sherman said. "He always gives great challenges."