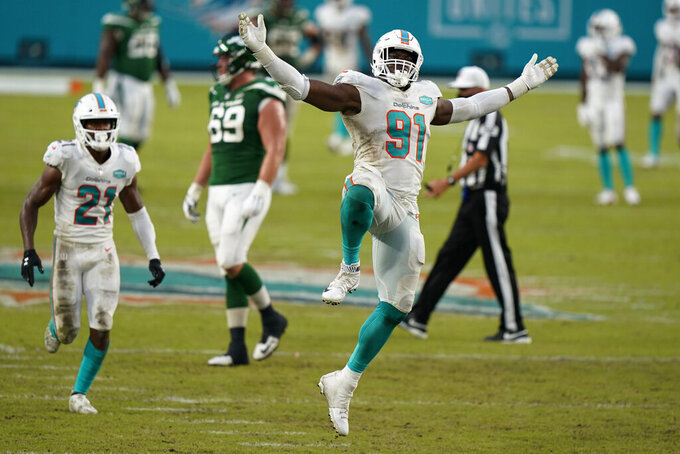 Miami Dolphins defensive end Emmanuel Ogbah (91) celebrates after sacking New York Jets quarterback Joe Flacco during the second half of an NFL football game, Sunday, Oct. 18, 2020, in Miami Gardens, Fla. Ogbah is tied for fourth in the NFL with a career-high seven sacks, more than any Miami player had in all of 2018 or 2019. The L.A. Chargers play at Miami on Sunday. (AP Photo/Wilfredo Lee) 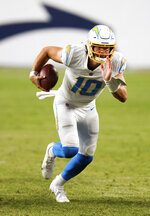 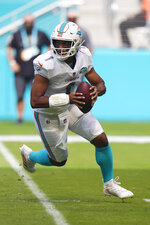 MIAMI (AP) — The Miami Dolphins had an opportunity to take Justin Herbert in the 2020 draft, and early this season it was tempting to wonder why they didn’t.

Tua Tagovailoa is starting to provide the answer.

The rookie from Alabama had a breakout performance last week in a thrilling win at Arizona that added momentum to the surprising Dolphins' recent surge. They're 5-3 and take a four-game winning streak into Sunday's home game against Herbert and the luckless Los Angeles Chargers.

Miami made Tagovailoa the fifth choice in the draft, and with the next pick the Chargers selected Herbert. Both teams are happy about their decisions.

The Chargers are 2-6, with their losses by a combined 24 points, but Herbert has been terrific since becoming the starter in Week 2. The former Oregon star's 2,146 yards passing are the second-highest total in NFL history for a player’s first seven games.

Tagovailoa didn't break into the lineup until Week 8. But as a starter he's now 2-0 — or Tua-0, as Dolphins fans might say, giddy that the former Alabama sensation is still showing a knack for winning.

“He has had so much success over the past couple of years," Herbert said. “It has been great to watch him and all the things he’s done. So really looking forward to playing against him.”

The matchup is just the seventh in the NFL since 1967 involving two rookie starting QBs who were taken in the top six picks of the draft.

“It’s not a competition between me and Justin,” Tagovailoa said. “It’s a competition for myself to go out and see what I can do to help our team be successful against their defense. And I’m pretty sure it’s the same for Justin as well.”

The Dolphins' dramatic turnaround in the past 12 months is evident in their point differential. At midseason in 2019 they were minus-153, worst in the NFL, and now they're at plus-61, which ranks fifth best.

With the improvement comes heady speculation the Dolphins might be bound for their first playoff berth since 2016, and perhaps even their first postseason victory since 2000. This week the Dolphins talked about the hazard of overconfidence, which hasn't been a problem in Miami for a long time.

“You know you’re going to get people saying you're great and things like that,” defensive end Shaq Lawson said, “but we’re trying to block that out.”

CAN THEY KEEP A LEAD?

The Chargers have led at halftime in six of their eight games, including last week's loss to the Las Vegas Raiders. Five defeats have come down to the final play.

“I don’t want to find out how many more gut punches we can take,” coach Anthony Lynn said. “I mean, right now, we’ve been kicked in the guts six times. That’s six times too many for me.”

Since the start of last season, 15 of the Chargers' 17 defeats have been by eight points or fewer.

In each of the past two games, Dolphins defensive end Emmanual Ogbah has had a strip sack that a teammate returned for a touchdown.

“If that’s what it takes to win games, then I’m down to do it," he said with a laugh.

Ogbah is tied for fourth in the NFL with a career-high seven sacks, more than any Miami player had in all of 2018 or 2019. He has had a full sack in each of the past five games.

Ogbah is one of five veteran newcomers starting on the Dolphins' much-improved defense.

Despite plenty of injuries, the Chargers' running game has managed to be productive. They are averaging 146 yards over the past five games, which is fifth in the league in that span.

The ground game has gotten back on track despite Austin Ekeler being sidelined with a hamstring injury. Joshua Kelley is sixth among rookie running backs with 433 yards from scrimmage.

Kalen Ballage, who was with the Dolphins in 2018-19, last week saw his first extensive action for Los Angeles and gained 66 yards on nine carries.