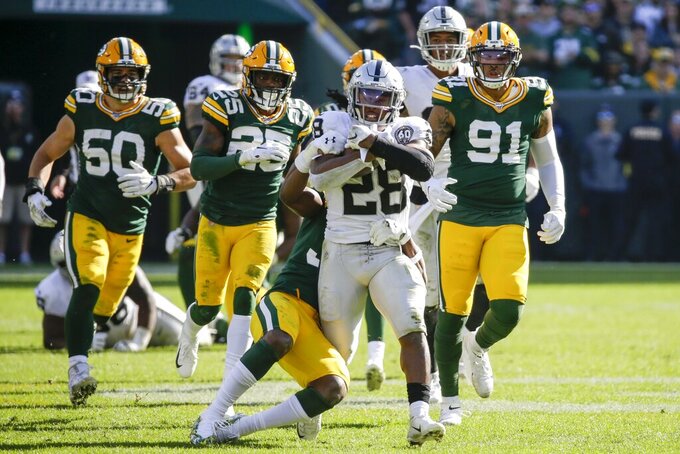 ALAMEDA, Calif. (AP) — The biggest question surrounding Josh Jacobs coming into this year's draft was whether he could be an every down back in the NFL after splitting time in Alabama's loaded backfield.

Just six games into his professional career, a player who had more than 16 carries just once in three years in college is showing the ability to be a workhorse for the Oakland Raiders with 47 carries for 247 yards in the past two games.

"When he's running like he's running, you have to feed the beast," coach Jon Gruden said. "He's hungry. He doesn't want to come out of the game either. This guy wants to be a great back. To do that he has to play through some tough injuries and some tough spots. We are going to try to be careful with him, we have been. I'll just say this, this is one heck of a young football player. One of the best I've ever been around at this age. He's really impressive."

Jacobs hurt his shoulder when he initiated contact with a defender on his first carry of the game last week against Green Bay. He went briefly to the locker room during the first drive to get a pain-killing shot and then returned to finish off another strong performance with 21 carries for 124 yards.

He hasn't practiced so far this week but said Thursday that he plans to play Sunday against Houston even if he can't practice this week. Jacobs also said he has no plans to dial back his physical play to protect his body.

The game against the Packers followed up his 26-carry, 123-yard day against Chicago the previous game as Jacobs became the first Raiders player since Justin Fargas in 2007 to record back-to-back 120-yard games.

If he's able to do that again this week against a Houston defense that hasn't allowed a 100-yard rusher in 23 consecutive regular-season games, he will join Marcus Allen and Napoleon Kaufman as the only Raiders to do that in franchise history.

Jacobs leads all rookies with 554 yards rushing and four TDs on the ground and needs just 144 yards to break Allen's franchise record for rookies.

He also leads the NFL with 3.9 yards per rush after contact, according to Pro Football Focus, showing both a physical style and elusiveness to thrive in the NFL as a runner and a receiver.

"It's unbelievable how good he is," quarterback Derek Carr said. "I could give him the ball right here from me to you and he'll end up over there, make eight guys miss and we're all high-fiving each other for a first down, you know what I mean? It's definitely a luxury as a quarterback. It's one of those luxuries you see with these guys like Ezekiel Elliott or Todd Gurley or Saquon Barkley. ... It's a beautiful thing when you have a guy like that because it takes a lot of stress off the play caller. It takes a lot of stress off the quarterback and the offensive line that a guy can do both."

It's been quite a start for someone who was just a part-time player in college. He had double-digit carries just seven times in his career and ran for 100 yards only once as he shared time with Damien Harris and Najee Harris. Jacobs finished his college career with 251 carries for 1,491 yards (5.9 per carry) and had 48 catches for 571 yards but showed enough to be the first running back taken in the draft at No. 24 overall.

"We were confident when we drafted him based on his size and makeup," offensive coordinator Greg Olson said. "He's had two games here where early in the game he got dinged and had to go to the locker room. But both those games he came right out and got right back into the action. That was great to see."

NOTES: C Rodney Hudson (ankle) and RG Gabe Jackson (knee) were limited after missing practice Wednesday. ... DE Arden Key (knee) was also limited and is expected to return for the first time since getting hurt in London on Oct. 6.