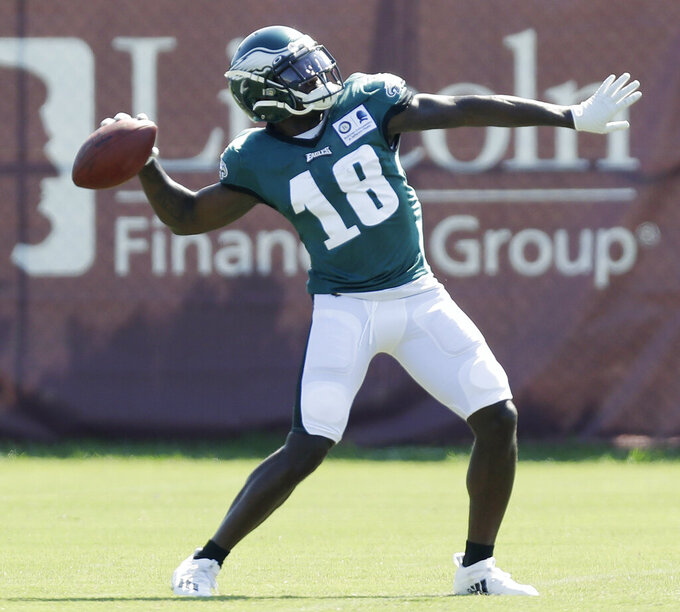 PHILADELPHIA (AP) — Carson Wentz connected with Jalen Reagor on a crossing route for a long gain. Then did it again.

On the first day of padded practices, Wentz had plenty of chemistry with the rookie wide receiver. Reagor was selected with the 21st pick in the first round of the NFL draft, one of several speedy wideouts the Eagles added in the offseason.

“It’s been a lot of fun just to work with him,” Wentz said after practice Monday. “He’s an explosive athlete. You can see that with his route-running ability and his down-the-field presence. You turn on his highlight tape and you can see what he does with the ball in his hands, and that’s one thing that we haven’t been able to see with just practices going on.”

The coronavirus pandemic kept teams off the field during the offseason and pushed back the start of padded practices in training camp. But Reagor has quickly grasped the offense.

“I know what he brings as a threat to the defense and he’s picked up on things really well,” Wentz said. “He’s always listening and always curious about why we’re doing things a certain way or how I saw a certain play. And that’s the type of thing I look for as a veteran and look for these young guys that truly want to learn, the ones that truly want to grow and want to be great. I see that with him and I see an extremely bright future in him. I’m excited to help him become the player that he dreams of being.”

The Eagles prioritized speed in the draft, selecting Reagor, John Hightower in the fifth round and Quez Watkins in the sixth. They also acquired Marquise Goodwin in a trade from San Francisco, but he opted to sit out the season because of the coronavirus.

Last season, Wentz became the first player to throw for more than 4,000 yards despite not having a wide receiver reach 500 yards, in part because of injuries. Still, Wentz led the Eagles to four straight wins in December to secure an NFC East title with a group of castoffs at receiver.

He has more options now.

DeSean Jackson is healthy and looks as if he hasn’t lost a step. Reagor lined outside with Jackson and put on a display.

“Jalen Reagor has really been impressive out on the football field,” Eagles coach Doug Pederson said.

Hightower and Watkins have an opportunity despite being third-day draft picks. Nelson Agholor wasn’t brought back and signed with Las Vegas in free agency. Alshon Jeffery is still not ready after Lisfranc surgery.

Greg Ward headlines the list of returning receivers and he became a go-to target for Wentz down the stretch last season. J.J. Arcega-Whiteside, a disappointing second-round pick last year, didn’t practice because of a lower body injury.

NOTES: DT Javon Hargrave, who signed a $39 million, three-year contract in free agency, is out multiple weeks because of an upper body injury. DE Derek Barnett (lower body) is week to week. OL Jason Peters (lower body) and Arcega-Whiteside are day to day.