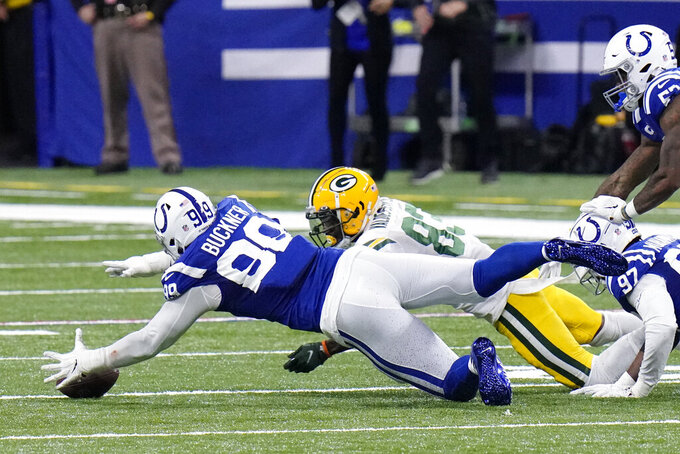 Even though he was still rehabbing from a torn anterior cruciate ligament in his left knee; even though he slid to the third round of the draft because of an injury suffered during the Pac-12 title game; even though COVID-19 forced the cancellation of offseason workouts and he missed training camp, Blackmon believed he could win it.

“I sat down and literally wrote Defensive Rookie of the Year all over my playbook because that’s what I want," he said after forcing the game-changing fumble in Indy's 34-31 overtime victory over Green Bay. “I truly believe that’s a talent that I have that I can help bring to this team. It's definitely been on my radar."

Blackmon has played in eight games and made seven starts since replacing the injured Malik Hooker in the lineup. The former Utah cornerback has 26 tackles with two for losses, intercepted two passes, has six passes defensed and the key forced fumble in a crucial win.

He's not the only young player making an impact for the Colts (7-3).

Second-round pick Michael Pittman Jr. has 14 receptions for 223 yards over the last three games, celebrating his first career score with a nifty 45-yard catch-and-run against the Packers. Jonathan Taylor, another second-rounder, had 22 carries for 90 yards and caught four passes for 24 yards — his most productive game in a month and perhaps his best game this season.

After Blackmon forced the fumble and DeForest Buckner, who the Colts acquired in a March trade for their first-round pick, recovered it, undrafted rookie kicker Rodrigo Blankenship made the winning field goal.

“Pitt was great off offensively. All of those other guys you mentioned were big time, too" eight-time Pro Bowl quarterback Philip Rivers said. “It’s a heck of a rookie class."

They seem to be thriving at a time many rookies tend to wear down, and the Colts know they'll need each rookie to keep producing to make a deep playoff run.

“Nobody's doing what he (Blackmon) is doing," Leonard said. “He’s making big-time plays in big-time situations. That's what you’re supposed to do. He’s not playing like a rookie."

Takeaways. The Colts forced four more turnovers Sunday, including two game-changing fumbles in the second half — against a foe known for protecting the ball. Indy is tied for second in the league with 17 takeaways.

Closing out games. Indianapolis secured an enormous win after nearly giving it away with five holding calls and six total penalties on its final possession of regulation. The sequence let Green Bay get the ball with one timeout and 85 seconds left on the clock. Aaron Rodgers led the Packers to the tying field goal with 3 seconds left.

“I’m disappointed, that we didn’t put it away," coach Frank Reich said. “I didn’t get a look at the calls, all I know is we’ve got to coach that better and play that better."

QB Jacoby Brissett. Reich has been trying to get Brissett on the field all season. This week, Brissett found his niche in short-yardage situations. Don't be surprised if that package continues to be deployed, with the coaching staff adding some new wrinkles in future games.

OL Le'Raven Clark. The fifth-year veteran long ago cemented his role as a key backup. He replaced injured left tackle Anthony Castonzo in a loss to Cleveland but struggled against Myles Garrett. This time, he replaced right tackle Braden Smith (thumb) and struggled again, and Chaz Green took some snaps away from Clark.

Rivers hurt the big toe on his right foot early in the fourth quarter. He said afterward that he expects to make his 235th consecutive start when the Colts host Tennessee in a key AFC South showdown next weekend. If he does, Rivers will pass Eli Manning for the 10th-longest streak of consecutive starts in league history. But Rivers may need some extra time in the training room this week.

“I talked to him today, obviously, it was pretty sore," Reich said Monday. “We'll see what happens.”

140 — The Colts rushed for 140 yards Sunday, their second-highest total this season. They've run for 273 yards over the past two weeks, their best two-game stretch this season, and now have four straight 100-yard games.

Indy is 2-1 during this crucial four-game stretch and can secure the inside track to a division title by sweeping the season series from the Titans.