Rosen back with Browns on practice squad, team's fifth QB 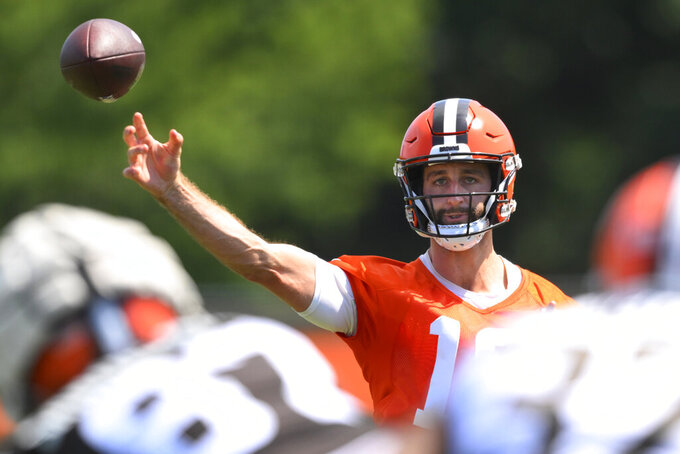 BEREA, Ohio (AP) — The Browns may have a new quarterback problem: too many.

Cleveland added Josh Rosen to its practice squad on Thursday, two days after releasing the veteran QB after he was signed early in training camp as the team navigated through the Deshaun Watson situation.

With Rosen aboard, the Browns have five quarterbacks, including Watson, who began serving his 11-game NFL suspension for alleged sexual misconduct on Tuesday and will be away until at least Oct. 10.

Rosen gives the Browns more depth at what has been a traditionally troublesome position for Cleveland, which has started a league-high 33 QBs since 1999.

Coach Kevin Stefanski said the organization is comfortable with a quintet of QBs.

"Just felt like it was the right thing to do to have these players, take a look at everybody and constantly be in evaluation mode,” he said.

The 25-year-old Rosen was beaten out in camp by Joshua Dobbs to be the backup behind Jacoby Brissett, who is slated to start the Browns’ first 11 games while Watson serves his suspension.

Stefanski reiterated that Dobbs, who had a solid camp and preseason, is Cleveland's No. 2 quarterback.

Rosen was released when the Browns trimmed their roster to 53, but came back after not being claimed on waivers.

"He has come a long way because he is a very, very smart quarterback, but he's still growing.”

Before bringing back Rosen, the Browns claimed Kellen Mond on waivers from the Minnesota Vikings on Wednesday. The second-year QB couldn’t lock up the No. 2 job this summer and was released Tuesday.

He practiced for the first time with the Browns on Thursday before players began a long holiday weekend.

“I was able to shake his hand,” Stefanski said. "He got here in time to be in meetings. It's like anything else, when you get a player at any position, it is time to kind of jump in the playbook and start to learn it as quickly as they can.”

Cleveland has completely overturned the quarterback position from a year ago, when Baker Mayfield struggled with a shoulder injury and was eventually traded. Case Keenum, Mayfield's backup who started two games in 2021, was dealt to Buffalo. Nick Mullens, who made one start, is now in Minnesota.

The 25-year-old Rosen is with his fourth team in four years since the former UCLA standout was drafted by Arizona in 2018. He's 3-13 as a starter.

Defensive end Isaac Rochell also was signed to Cleveland's practice squad. He had been released to make room on the roster for Mond.