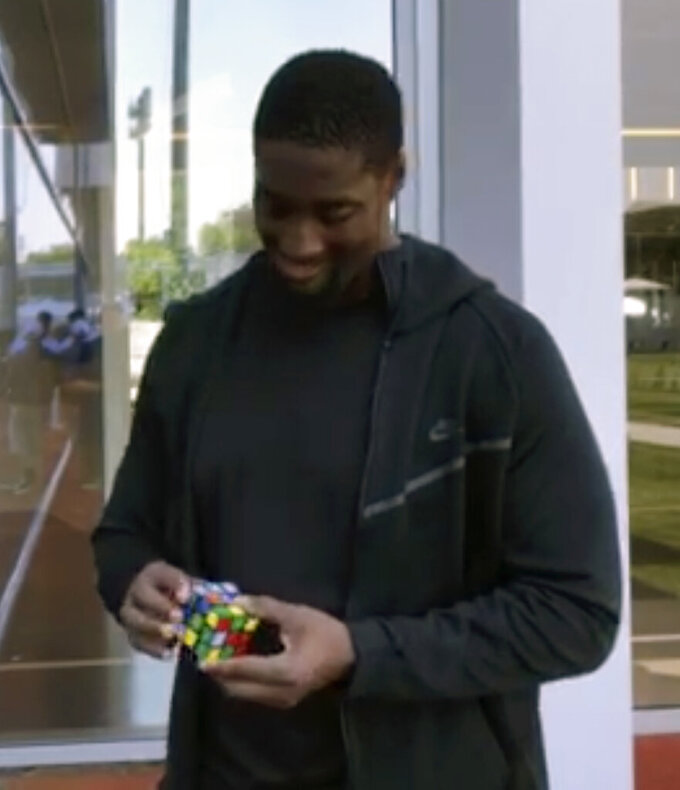 CORRECTS TO BEING CLAIMED OFF WAIVERS FROM THE PATRIOTS, NOT AS AN UNDRAFTED FREE AGENT FROM THE UNIV. OF TEXAS - In this image taken from video, New York Jets rookie offensive lineman Calvin Anderson works on a Rubik's Cube at the NFL football team's practice facility in Florham Park, N.J., Sunday, July 28, 2019. The puzzle cubes are a bit of an obsession for Anderson, who was claimed off waivers from the Patriots after New England signed him as an undrafted free agent. (AP Photo/Dennis Waszak)

FLORHAM PARK, N.J. (AP) — Calvin Anderson was in middle school the first time he watched in amazement as a football teammate deftly solved a Rubik's Cube.

Always the competitive type, he needed to know how to do it, too.

"I loved how it was a combination of hand-eye coordination," he said, "and keeping your mind buzzing the whole time."

So Anderson grabbed one of the popular six-sided puzzles and started unscrambling the 54 little colorful squares — white, blue, red, green, yellow and orange — a task that has stumped and frustrated millions around the world since it first became a pop-culture phenomenon in the 1980s.

Today, the New York Jets rookie offensive lineman is a master of the Rubik's Cube, able to solve it in various ways — including behind his back or even blindfolded.

He estimates he has solved thousands of cubes — and counting — and owns 30 of them. He even brought two with him to training camp this summer.

"I probably need to get some more, actually," Anderson said. "I have a little dresser (at home) that has a drawer with a bunch of Rubik's Cubes."

Then, he started laughing.

The puzzles are a bit of an obsession for Anderson, who is trying to make the Jets' roster after being claimed off waivers from New England in May after being signed as an undrafted free agent out of the University of Texas.

His football journey started as a youngster on the fields of Austin, Texas, and his favorite puzzle has accompanied him along the way. After he opted to attend Rice, Anderson heard about the football team's freshmen talent show and came up with a plan.

Well, instead of doing it the conventional way like everyone else, Anderson learned how to solve it while not even looking.

He'll take a few seconds to study the cube, memorizing where each square is situated. Just a few moments later, the puzzle is completed.

"So, my granddad is a big Sudoku solver and likes to do the Sudoku puzzles," Anderson explained. "I don't even know how I had this idea, but one day while I was watching him doing it, I thought the squares that you're trying to get 1 through 9 on a Sudoku puzzle — 1 through 9 in the square and then 1 through 9 down, and 1 through 9 across — it's very similar to the Rubik's Cube in that the colors on the squares could be numbered 1 through 9, like you're dialing on a phone: 1, 2, 3, 4, 5, 6, 7, 8, 9.

"Each color is correlated to another side with the numbers and the colors. So, if you see the colors and you transfer them to numbers — I've always been good with numbers. I'm not a big picture guy, but I can remember numbers. Numbers are easy to me — when you fold the cube back together, every time you mix it up, the numbers are always correlated the same way."

Yeah, you're not alone.

It all makes total sense to Anderson, though.

"Think about it: Mixing up a Rubik's Cube, you've got the white side and blue side and the red side," he said. "This corner piece that connects all three of them is always, no matter where it is on the cube, is always going to be '3-9-1.' ... Literally, I just see numbers in my head while I'm doing it. It's a little different, but it's interesting.

"I don't know. It's interesting to me. It helps me with the way I learn."

Anderson, it should be noted, graduated from Rice with degrees in mathematical economics and religion with a minor in business before transferring to Texas to focus fully on football. Oh, yeah, and he's working on a master's in finance, with plans to someday get his MBA.

With a Rubik's Cube in his hands, of course.

"Before games when I was in Texas, everybody was asking me why I always would do the Rubik's Cube or carry it around," he said. "Same thing at Rice. When I'm locking into something, it helps to have my mind being stimulated like that. It's almost calming to me. It's like my mind's working, but I'm zeroing in. It's getting rid of distractions."

According to Rubik's, the record for the fastest solve is 3.47 seconds by China's Yusheng Du. Anderson's personal mark is about 13 seconds. There's no listed top time for a behind-the-back solve, but Anderson did it for The Associated Press in a breezy 32 seconds.

He is not sure if any of his Jets teammates are aware of his not-so-secret skill. But it will be on full display soon when the team's rookies hold their camp talent show.

"I'll probably break out something cool for that," he said, keeping his plan under wraps.

Anderson can't remember the last time he was stumped, but he is constantly asked by people to prove he can solve the puzzle.

"It always happens," Anderson said. "Anybody who knows, it's always a challenge, like: 'Let's see if you can actually do it. Let me see with my eyes.'

"Then, they always have the same reaction."