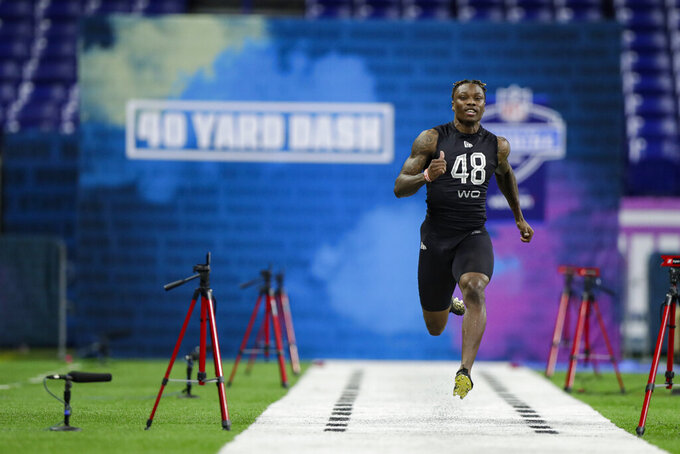 INDIANAPOLIS (AP) — The stars came out at night inside Lucas Oil Stadium, especially Henry Ruggs III who came up short in his quest to set a record but still clocked the fastest 40-yard dash at the NFL scouting combine.

A 4.27-second time in the 40 is nothing to scoff at, but Ruggs had hoped to run faster.

The 5-foot-11, 188-pound speedster from Alabama fell short of the record 4.22-second time that Bengals wide receiver set during a blazing 2017 run.

Ruggs said he had previously run the 40 in 4.25 seconds and felt he could top that in Indianapolis.

He was initially clocked at 4.28 on his first of two runs but the official time was recorded at 4.27 seconds. His second time was 4.31.

Ruggs did back up his other boast this week, when he said he was the fastest guy at the NFL scouting combine.

Quez Watkins of Southern Miss was the next-fastest at 4.35 seconds when the combine's on-field workouts and 40-yard dash made their prime time debut.

Ruggs, who is often compared to Tyreek Hill, also had a 42-inch vertical jump, which was tied for second-best among the receivers who later ran routes and and caught passes along with the tight ends from the quarterback prospects -- excluding projected top overall pick Joe Burrow and a rehabbing Tua Tagovailoa.

Utah State's Jordan Love, around whom buzz has been building this week, shined during the second QB session after Oklahoma's Jalen Hurts stood out in the first group. Oregon's Justin Herbert also impressed.

Other receivers who stood out from an unusually deep group were LSU's Justin Jefferson, Alabama's Jerry Jeudy and Oklahom's CeeDee Lamb.

The linemen and running backs hit the field Friday night.