Run defense breaks down again for Texans, who fall to 0-2 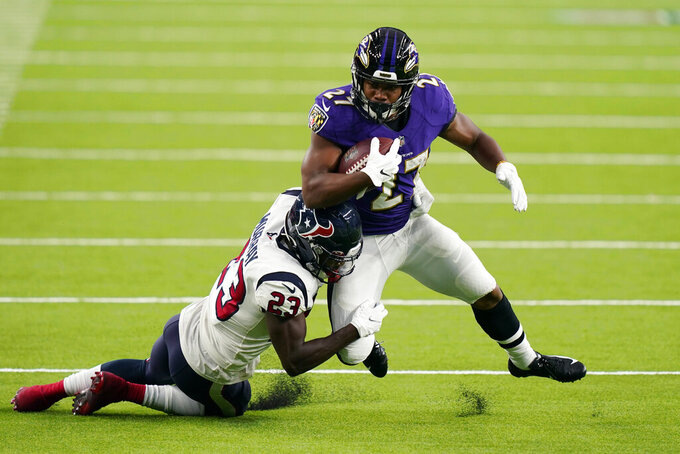 HOUSTON (AP) — Mark Ingram, Gus Edwards and Lamar Jackson each ran for more yards individually than the Texans did as a team in the latest embarrassment for Houston's run defense.

Ten days earlier, the Texans allowed 166 yards rushing to the Kansas City Chiefs in their season-opening loss. The Baltimore Ravens, who had the league's best rushing attack last season, were clearly paying attention.

“It’s not very good, obviously,” coach Bill O’Brien said. “We’ve given up a lot of rushing yardage in the last two weeks. ... The run defense has to improve.”

Baltimore had 44 yards rushing before halftime before piling up 186 yards in the second half to keep the ball out of Houston’s hands.

“The fourth quarter really hurt us,” defensive tackle Brandon Dunn said. “It was bend but don’t break and we broke.”

The Ravens were up by 10 early in the fourth quarter when Ingram took a direct snap on fourth-and-1 and dashed 30 yards to the end zone to make it 30-13.

“I haven’t seen it on film so I can’t say but when a guy goes that far on a fourth-and-1, you just assume there’s something wrong with our gap-scheme defense there and either somebody wasn’t in their gap or we didn’t tackle if we were in our gap," defensive end J.J. Watt said.

Ingram had 55 yards rushing, Edwards led the team with 73 yards on just 10 carries and Jackson ran for 54 yards.

David Johnson was held to 34 yards rushing in his second game with the Texans after being traded from Arizona for DeAndre Hopkins in the offseason.

“We have to get better quickly in all areas,” O’Brien said. “We have to coach better, we have to play better. We don't have any choice."

The Texans trailed by 6 in the second quarter when Keke Coutee made a short reception and Marlon Humphrey knocked the ball out of his hands. L.J. Fort scooped it up and ran 22 yards for a touchdown to make it 20-7 with about five minutes left in the first half.

“I'm sure (Coutee) feels as bad about it as anybody. He's worked hard," O'Brien said. “But when you fumble and it's a touchdown it's a tough play."

Houston’s next drive ended when Marcus Peters made a diving interception.

Deshaun Watson threw for 275 yards and a touchdown but had the interception and was sacked four times and hit 13 other times for the Texans, who played their home opener without fans because of the coronavirus pandemic.

O'Brien said with his team trailing, the Ravens got some hits on Watson in obvious passing situations. But he acknowledged the pass protection needs work.