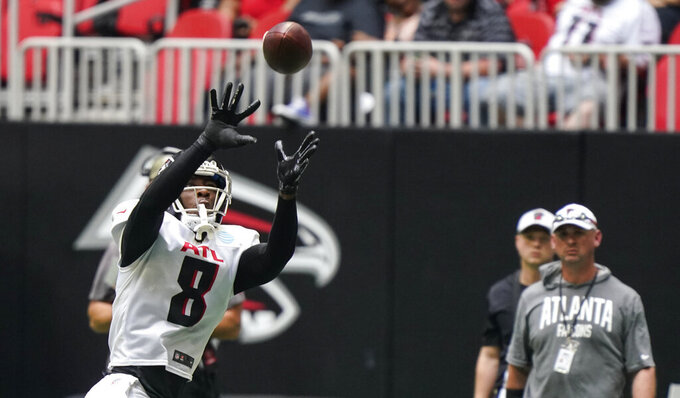 ATLANTA (AP) — Matt Ryan is getting used to hearing a new voice in his helmet, so Saturday’s practice at Mercedes-Benz Stadium gave him a new chance to listen to Arthur Smith call plays.

Ryan, the 14th-year quarterback of the Atlanta Falcons and the 2016 NFL MVP, made the most of having fans in the stands — the team said it sold 25,000 tickets to give to charity — so he could practice fine-tuning his listening skills with Smith, the new head coach who will call plays this season.

“For me, it’s a different voice in your ear and when you’re on the field — it’s hard to explain,” Ryan said. “It’s a very strange deal, right? That somebody is talking to you while you’re playing, so you have to get used to their rhythm, their cadence, how they speak because sometimes it gets loud in there. Everybody’s tone is different. Everybody’s pronunciation is different. Those kinds of things. You’ve got to get used to those guys talking in your headset.

“For me, today was a great opportunity to have a little bit of noise and to have to kind of listen through that and get a feel for how Arthur communicates on there. I thought that was a huge benefit for me today.”

Smith and Ryan have developed a working relationship built on mutual respect since Smith took charge of the Falcons in January. Smith respects Ryan’s longevity and the success he’s had in his career and Ryan respects Smith’s understanding of the game.

“I love working with Matt Ryan,” Smith said. “It’s very honest and open. But it’s like any relationship. You have to work on it every day. I’m very pleased with where we’re at.”

Smith is the fifth coach who will call plays for Ryan. He worked earlier in his career with Mike Mularkey, Dirk Koetter, Kyle Shanahan and Koetter again. Ryan sees similarities in Smith’s playbook and likes the wrinkles that Smith has added on his own.

“So there are things that are in it that I can recall from other parts of my career that I’m very familiar with and there are a lot of parts of it that as I dive deeper into it, I need more reps. I need to get comfortable with some of those things. That’s what training camp is for is to iron out things that we’re going to do as a team moving forward and get really good at.”

It’s not always a seamless transition. Ryan has to get accustomed to Smith’s enunciation, his volume and the speed at which he talks.

“You just have to get comfortable,” Ryan said. “It just takes time. It’s one thing to do it on the practice field where it’s a very sterile environment and it’s another thing to do it in New Orleans or Tampa or up in Charlotte when it’s going. You have to know what he’s saying without hearing it sometimes. I don’t know if that makes sense, but you just have a feel for what’s coming out.”

They will get another dress rehearsal Friday night when Tennessee visits for the preseason opener. After that, the Falcons will practice for a week in Miami before facing the Dolphins in an exhibition before wrapping up the preseason at the end of the month against Cleveland.

The regular season opener is Sept. 12 at home against Philadelphia. Ryan hopes to be a farther along in the transition by the time he faces the Eagles.

“I felt pretty comfortable,” Ryan said. “I probably only had one where I said, ‘Give it to me one more time. I didn’t catch all of that.’ All things considered, that’s not too bad. I’ve screwed up play calls before. I’ll probably screw up another one or two at some point in my career, but I think we’re in a good space. I really do. I like the start we’ve had the first two weeks of camp.”

Notes: The Falcons took a break from their training site in Flowery Branch to hold a nearly two-hour practice at their home field. ... DE Dante Fowler, who came off the reserve/COVID-19 list on Friday, did not practice. ... RB Qadree Ollison and DE Jacob Tuioti-Mariner were also held out. ... RT Willie Beavers, not rookie Jalen Mayfield, took the snaps with the first-team offense while Mayfield had taken most of the snaps in camp leading up to Saturday. The team is still waiting on Kaleb McGary, a former first-round pick and a starter the last two years, to return from the physically unable to perform list with an undisclosed injury. ... DE Adetokunbo Ogundeji, a fifth-round pick from Notre Dame, took most of the snaps with the first-team defense. ... Smith said Beavers and Ogundeji earned their roles by winning their one-on-one matchups last week. Neither is penciled in as a starter just yet.