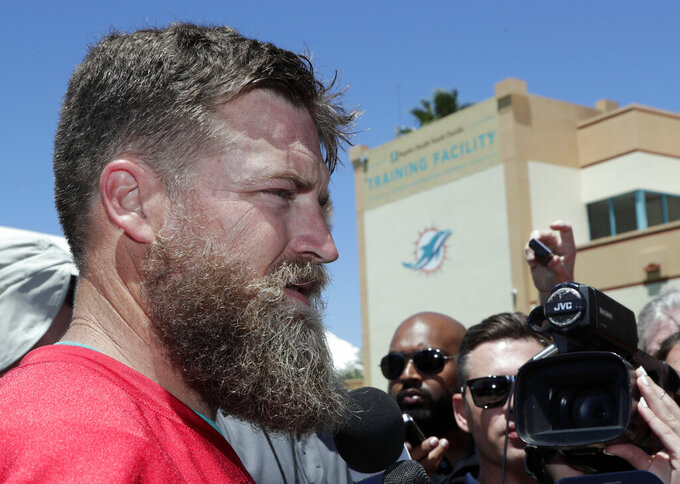 Two-time Pro Bowl safety Reshad Jones skipped the first practice Tuesday under new coach Brian Flores, who declined to specify a reason for the absence of the team's highest-paid player.

Flores, hired in February after the Dolphins fired Adam Gase, said Jones has been attending meetings and remains part of the team. But Flores declined to say whether Jones wants to play for the rebuilding Dolphins, or say whether he was disappointed by Jones' decision to sit out the workout.

"It's voluntary," Flores said. "He made a decision to train somewhere else. There's not much we can do about it."

Jones is expected to miss this week's three practices, which the Dolphins are allowed to conduct because they have a new coach. They missed the playoffs last year for the 15th time in 17 seasons, and oddsmakers list their 2019 championship chances as the NFL's worst.

Jones, a starter for Miami since 2011, has four years remaining on his contract, with a base salary of $13 million this year. He played in 14 games last season and underwent offseason shoulder surgery, and his recovery contributed to his decision to skip practice, Flores said.

"There are a few factors," the coach said. "He's rehabbing his shoulder. He's training. He has been here. He looks good. He has been in all the meetings. He is learning all the terminology and the defense. That has been good."

Jones' willingness to participate was also an issue last year under Gase. Jones took himself out of a midseason game against the Jets and watched the second half from the sideline, unhappy with a plan to rotate safeties.

"Those guys are working extremely hard to get back out on the field," Flores said. "Hopefully we see them out there as soon as possible."

Among those on the field was cornerback Xavien Howard, who tied for the NFL lead with seven interceptions last year and made the Pro Bowl. He's heading into the final year of his contract and negotiating an extension.

"I'm here today, and we'll just see how it goes from there," Howard said.

Also taking part in the workout was veteran newcomer Ryan Fitzpatrick, the caretaker quarterback until the Dolphins acquire a franchise QB — which could happen in next week's draft.

Fitzpatrick said the team is in the early stages of learning Flores' offense.

Flores declined to talk about the draft. The Dolphins have the 13th pick and a multitude of needs besides quarterback.

Issues with his star safety didn't dampen Flores' enthusiasm about his new job. He was hired after helping the New England Patriots win the Super Bowl as their linebackers coach and defensive play caller.

"I'm living the dream," he said. "It has been a learning process. Like the players, I try to learn and improve every day. This begins the phase I enjoy the most: coaching football. Today is a special day for me."